Eritrea’s government denied accusations by Ethiopian Prime Minister Meles Zenawi that it was responsible for abducting more than 100 gold miners in northwestern Ethiopia. The incident, which took place “recently,” was one of a series that 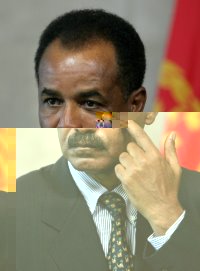 Eritrea’s government denied accusations by Ethiopian Prime Minister Meles Zenawi that it was responsible for abducting more than 100 gold miners in northwestern Ethiopia.

The incident, which took place “recently,” was one of a series that prompted a counter-offensive by Ethiopian forces on March 15, when they attacked three military bases inside Eritrea used by rebels to attack Ethiopia, Meles told lawmakers yesterday in the capital, Addis Ababa. He didn’t provide a more specific timeframe on when the abductions took place.

“It has become the modus operandi of Ethiopia to blame everything on Eritrea,” Girma Asmerom, Eritrea’s ambassador to the African Union, said in an interview today. “They think by lying and lying the lies may be perceived to be true.”

Ethiopia and Eritrea fought a war from 1998 to 2000 that killed 70,000 people, according to the Brussels-based International Crisis Group. Last month’s attack in southeastern Eritrea followed the January killing of five European tourists by Eritrea-backed insurgents, according to Ethiopia. Eritrean President Isaias Afwerki’s government denied any involvement in the incident.

“The proportional measure was taken in account of all the misdeeds,” he said. A return to all-out war is unlikely, Meles said yesterday.

Eritrea has been under United Nations sanctions since 2009 for allegedly supporting rebels in the Horn of Africa region, including al-Qaeda-backed militants in Somalia. Ethiopia accuses Eritrea of backing groups including the rebel Ethiopian Unity and Freedom Force, which yesterday claimed responsibility for an attack on Metema town in Ethiopia’s Amhara region on April 11.

About 20 buildings, including the Khartoum Hotel, were burned down, the group said in an e-mailed response to questions yesterday. Many of the properties were owned by members of the Tigray People’s Liberation Front, which is a member of Ethiopia’s five-party ruling coalition and led by Meles, the EUFF said.

The rebel organization, which was established in June, also said it attacked a convoy in which the governor of Sudan’s Gadarif state was travelling on April 9.

While the claims are the “usual fabrications”, all such groups are supported or “directly manipulated” by Eritrea, according to Bereket.

Eritrea does not want to destabilize its neighbors by backing rebel groups, according to Girma.

“It has selfish interests in a stable, united and developed Ethiopia and Sudan,” he said. “They are big markets.”

To contact the reporter on this story: William Davison in Addis Ababa via Nairobi at pmrichardson@bloomberg.net.

To contact the editor responsible for this story: Paul Richardson in Nairobi at pmrichardson@bloomberg.net.