by Ilan Lior The baby, Kako Yamena, was seriously wounded two years ago when an Israeli stabbed her in the head with a pair of scissors near Tel Aviv's central bus station. An Eritrean family whose baby 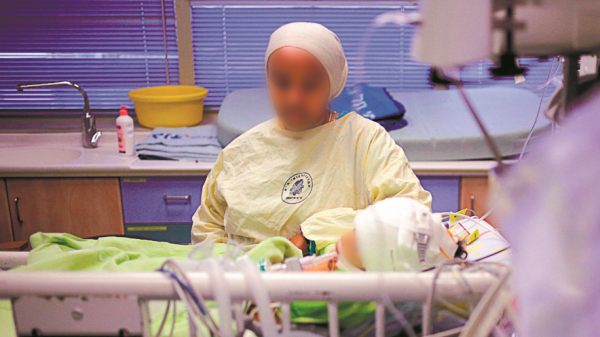 The baby, Kako Yamena, was seriously wounded two years ago when an Israeli stabbed her in the head with a pair of scissors near Tel Aviv’s central bus station.

An Eritrean family whose baby was stabbed in Tel Aviv two years ago left Israel last week for a European country.

The baby, Kako Yamena, was seriously wounded when an Israeli stabbed her in the head with a pair of scissors near Tel Aviv’s central bus station. Though she survived and is now about three and a half years old, she suffered serious motor disabilities and still needs therapy.
The assailant, Michael Zaretzky, said God had told him to stab a black baby. He was ruled insane and therefore unfit to stand trial.

Despite the circumstances of the attack, the state refused to recognize Yamena, who was born in Israel, as the victim of a hate crime. Then-Interior Minister Gilad Erdan did grant her legal residency in Israel on humanitarian grounds, but refused to award the same status to her family, which made her own status useless: Since her parents had no legal status, the National Insurance Institute wouldn’t finance her medical treatment.

Erdan’s successor, Silvan Shalom, also refused to grant her parents and older sister legal residency. The case was referred to the interministerial committee in charge of awarding residency for humanitarian reasons, but that panel never made a decision.

Kako’s mother Yordanes, who was holding her when she was stabbed, was traumatized by the incident and now rarely leaves her house. Her father, Muli, was summoned to the open detention facility in Holot sometime after the stabbing, but managed to get the summons canceled.

For the last two years, the family has lived mainly off donations from individual Israelis and help from human rights activists. Donations also paid for Kako’s expensive medical treatment, which cost thousands of shekels a month. A relative who is also in Israel moved in with the family in their tiny Tel Aviv apartment to help them on an ongoing basis.

Recently, responding to an appeal by human rights activists who had despaired of getting the family proper treatment in Israel, a European country agreed to accept the Yamanas as a humanitarian case and grant them housing, medical and psychological treatment and social benefits. However, the country conditioned its assent on its name not being publicized, to avoid conflict with Israel.

The country also refused to take in any members of the extended family, including the relative who moved in with the Yamanas. Thus the parents’ siblings and their children will remain in Israel.

“On the one hand, the family is very excited. On the other, they understand they’re going to a place where all their friends and community, including the Israelis that embraced them, won’t be there,” said Sigal Avivi, a human rights activist that has accompanied the family since the stabbing.

“This is very upsetting for them. The girls grew up speaking Hebrew, and to them, Israel was home. The oldest daughter did not want to leave at all.”

Avivi added: “I am very happy for the family, but it’s hard for me, because it was the State of Israel and Israeli society’s obligation to help and support this family.”