Eritrean born Tadesse Abraham struck half-marathon gold for Switzerland despite taking a wrong turn near the finish in Amsterdam on Sunday.

European titles go to Swiss and Portuguese runners over 13.1 miles Tadesse Abraham struck half-marathon gold for Switzerland despite taking a wrong turn near the finish in Amsterdam on Sunday. The 33-year-old veered off course with about 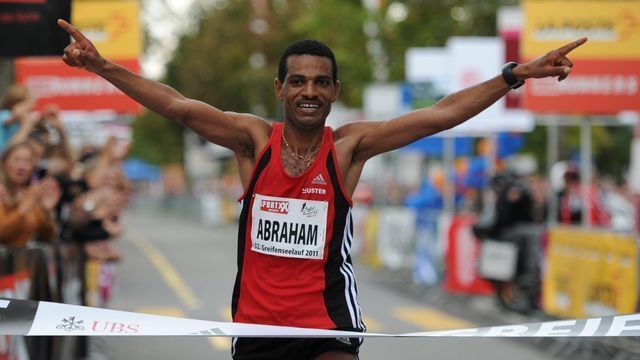 European titles go to Swiss and Portuguese runners over 13.1 miles

Tadesse Abraham struck half-marathon gold for Switzerland despite taking a wrong turn near the finish in Amsterdam on Sunday.

The 33-year-old veered off course with about 300 metres to go before quickly being redirected back on track as he sped to the finish to clock 62:03.

Abraham had surged away from Kaan Kigen Özbilen of Turkey in the closing stages to win by 24 seconds as Daniele Meucci took bronze for Italy a further 11 seconds behind.

Athletes and fans have voiced their frustration during the championships at the large number of African-born runners who have won European medals. But whereas Abraham was born in Eritrea he has lived in Switzerland for 13 years, speaks French and Swiss German and holds the Swiss record for the marathon with 2:06:40.

Runner-up Özbilen, though, was born in Kenya and ran under his original name of Mike Kigen for many years before starting to run for Turkey in October last year.

Hawkins said: “I was feeling quite strong in the last 6km, but the middle part I just wasn’t feeling it. It started off a lot more aggressive than I thought, normally I like to come through, but I thought I’d try something different and try to put myself near a medal but it didn’t pay off.

“Racing in in a championship definitely helped pre-Rio, I’m going to Mallorca on Monday, so hopefully that will help me to get used to the heat.  The temperature here was up what Rio is going to be, so coming from Scotland I don’t get much of a chance to run in that, so this has definitely helped.”

Sara Moreira took the women’s title in 70:19 after breaking away from Veronica Inglese of Italy in the final 5km. The Italian held on for silver in 70:35 while Jessica Augusto of Portugal finished strongly for bronze in 70:55.

On a day where Portugal is poised to play France in the final of the Euro 2016 football tournament, the country took two of the three medals and Moreira was crying at the finish line as she stood triumphant and draped in a Portugal flag.