In 1977, at the age of 15, Adonai joined the Eritrean People's Liberation Front. Much of his early work centres on his experiences as a "freedom fighter". Now a world-renowned artist, Adonai has won Eritrea's top art 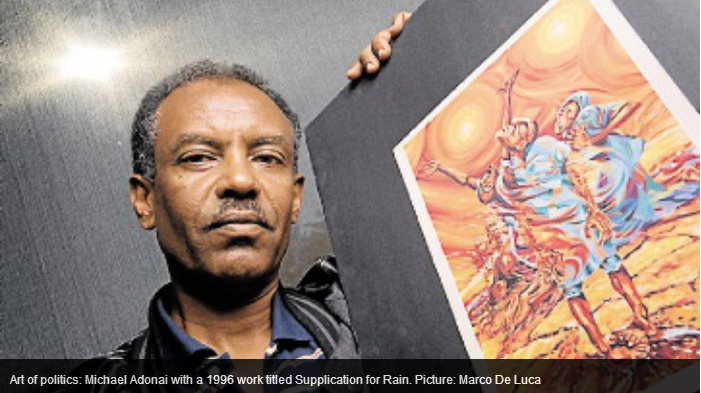 In 1977, at the age of 15, Adonai joined the Eritrean People’s Liberation Front.

Much of his early work centres on his experiences as a “freedom fighter”.

Adonai, who lives in Werribee, is exhibiting prints of his paintings at Altona’s Joel Gallery until Friday.

The originals remain in Eritrea, from where he was forced to flee in November.

“My solo exhibition was supposed to be in January at Federation Square, but the situation back home forced me to leave earlier,” he says.

“I came on November 1 because there was a very bad political situation in Eritrea and someone, a head official from Eritrea, told me to leave the country to save myself.

“I didn’t bring my original work because I ran away from my country because of the political situation.”

Adonai says his country’s culture is his favourite subject matter, but painting about politics is inescapable.

“Some of my paintings are political because I am living in a volatile area of east Africa, so it’s unavoidable for me as an artist and a citizen to express my inner feelings. The situation is really deteriorating.

“We have had this deterioration in Eritrea for this past eight years. We don’t have any free press, elections, no constitution. Even now in Eritrea, there are massive arrests.

“There was also an army mutiny in Eritrea these past two or three months. It was not a successful mutiny because they started to arrest a lot of people and the Eritrea area is known for its cruelty.

Wyndham Council has given Adonai studio space and in return he will pass on his skills.

“I have volunteered to help my community, to teach promising young artists, to share my experiences with them.”