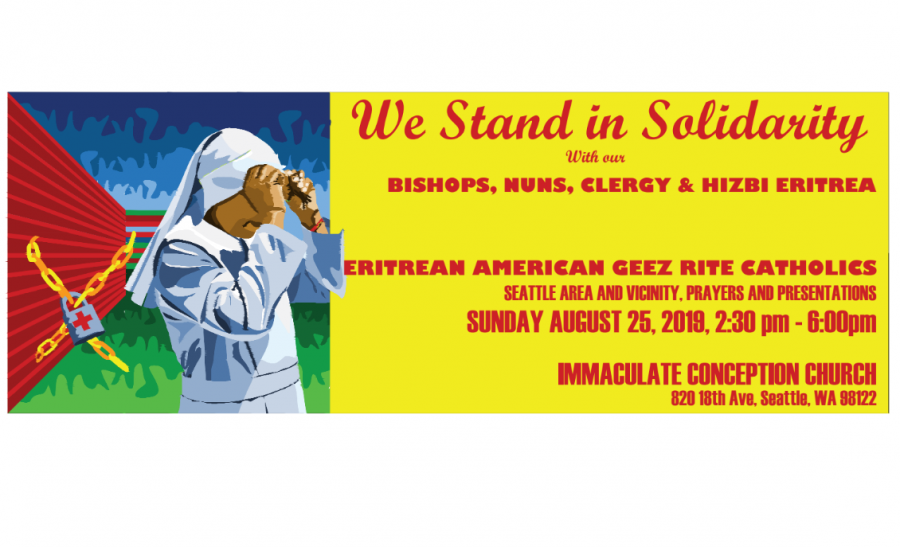 To whom it may concern

We are a faith community of the Geez Rite Eritrean American Catholic church, who worship at Immaculate Conception Church at 820 18th Ave. Seattle WA 98122. We are writing to you today to regretfully bring to your attention the political and social turmoil that has griped the people of Eritrea.

Our focus today is the religious persecution on all faith institutions specifically the nationalization of education and health facilities owned and run by the catholic church of Eritrea.

In June 5, 2019 the government of Eritrea has seized 29 health facilities owned and run by the Catholic church of Eritrea. These health care facilities provide services to all Eritrean people specially women and children who could not access the state-run hospitals

The Catholic Church has been serving the people of Eritrea for over 170 years. The 29 seized church run Health facilities include (3 Regional Hospitals, 25 health centers, 1 mother and child health center) located in 6 administrative regions. Most of these medical facilities are built in remote areas to serve people with little or no access to health services.

This unjust action by the government of Eritrea is part of its history of arbitrarily seizures, confiscations of properties, the detention and imprisonment of faith community members in the country.

The Eritrean Catholic Bishops sent a letter of protest and regret to the Eritrean authorities regarding the seizure by force of all Health hospitals and Clinics operated and owned by the Church.

The Archbishop of Asmara and the Bishops of Segheneiti, Keren and Barentu sent on 13 June 2019 a letter to the Eritrean minister of health telling her that the measure is totally ‘unlawful’ and ‘inappropriate’ and that the Church cannot hand-over its facilities willingly, as ordered.

The seizure of the facilities was enforced by armed soldiers and without consent from the health care staff and administrators. Patients were forced to leave their beds, some in the middle of procedures, health staff and nuns who served for free were told to leave and their property is confiscated or thrown in the street.

The action was described by the letter as an aggression on the integrity of the Church and that the Eritrean authorities will be held responsible for any adverse consequences of this unjustifiable action.

The letter stated that the Church has the obligation of serving the people and this social service is not to be interpreted as act of “opposing to the government and the state” nor is it intended to compete with the state.

Copied to the ruling party/PFDJ, the Ministry of Defense and other state “institutions”, the letter was signed by Abune Menghesteab Tesfamariam, the Archbishop of Asmara, and Abune Tomas Osman; Abune Kidane Ye’ebiyo, and Abune Fikremariam Hagos, the Bishops of Barentu, Keren and Segheneiti, respectively.

The cruel action of the government is costing lives and expected to do more harm, has shaken the communities of Eritrea inside the country and around the world. We ask your help to call on the Eritrean Government to stop its atrocious actions upon the faith and charity institutions and to respect the rights of its citizens. We ask for your compassion and act to defend the undefended.