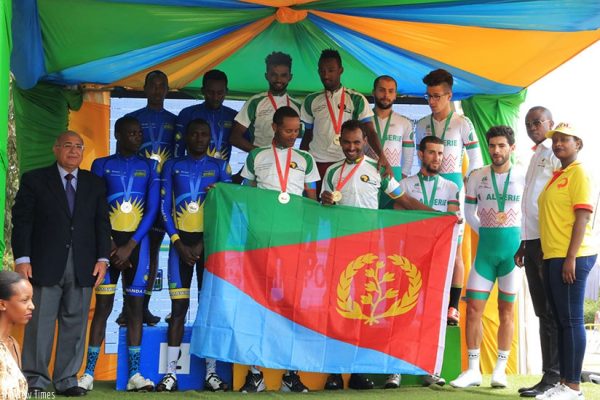 Medal table after Day One

RWANDAN cyclists enjoyed the home advantage to win a total four medals on day one of the 13th African Continental Road Championship in Kigali, Rwanda.

The 13th edition of Africa’s biggest annual cycling event which got underway on Wednesday will run through to February 18 in Rwanda’s capital, Kigali.

The opening day was for Team Time Trial (TTT), where a team of four races against time.

In the medal tally chase, it was a two-horse for the hosts against Africa’s giants Eritrea. The later won three medals while Rwanda took four out of eleven medals that were there to compete for.

Africa’s cycling giants Eritrea claimed the much anticipated race of the day, Elite Men’s TTT for a record 8th consecutive time since 2011. The junior men’s team of Eritrea also struck another gold in junior men’s TTT fray and silver in elite women’s category.

Only from day one, Team Rwanda won more medals than it ever did in one edition of the prestigious continental showpiece. The championship resumes on Thursday with Individual Time Trial.
Subscribe ASSENNA YouTube to get Radio Assenna shows on time: