Commemoration of dictatorship in Ethiopia

Commemoration of dictatorship in Ethiopia If we stay healthy and live long, we will witness very surprising things in this world starting from our homes. It is obvious that the recent visit of Isayas Afwerki, PIA, 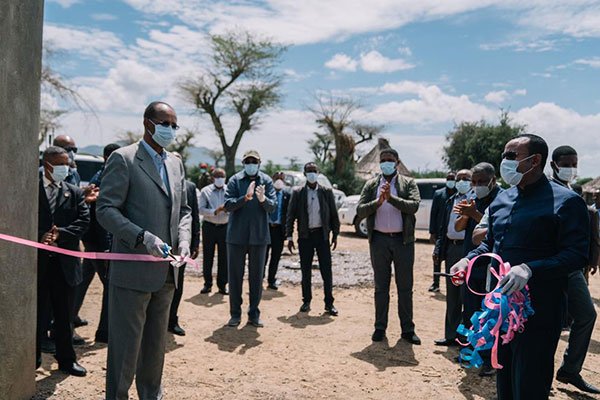 Commemoration of dictatorship in Ethiopia

If we stay healthy and live long, we will witness very surprising things in this world starting from our homes. It is obvious that the recent visit of Isayas Afwerki, PIA, to Ethiopia was a surprise to many of us, with some saying it was a resurrected person and for others, a fictional drama that cannot be comprehended by normal minds.

It all started with a tweet from the Ministry of Information Gebremeskel from Asmara: “PM Isayas Afwerki on a two day visit to Ethiopia to discuss with his friend issues related to COVID, locust blah bla…..” Firstly, the more expected breaking news that the President is in good health should have been the priority, and secondly he should have appeared for a second or minute to his people (I mean PFJDtreans).

He was seen via the Ethiopian news having an intimate and relaxing breakfast among the president of the country and others. The photo reveals that there was intimacy, joy and happiness on the faces of all around the table. What makes Isayas happy and joyful? I can guess at least one thing.

During the visit, he was seen celebrating the opening of water and agriculture projects, though he never opened any infrastructure projects recently in Eritrea. Except for the military graduation of Saw trainees, he was never seen at university graduations or cutting ribbons on water projects in Eritrea. Maybe Dr Abi kept this ceremony as an advantage in case he needs to invite Isayas to use it as a good excuse for his coming to Addis.

Isayas‘s visit to Dr Abi revealed other facts than the EBC and Eritrea minister claimed. Those are good for the media but not difficult for any Eritrean and Ethiopian to dig shallow and find the truth.

I called it the official commemoration of his friend and the way to dictatorship.

If someone was in hospital with an acute illness (and the first thing anyone likes to do is to relax and stay home with your loved ones and relatives) – what if you have a more pressing issue bigger and greater than your health? Today, for many of us and the leaders of the world, we are fighting an infectious virus, and implementing the advice from health professionals is critical to minimize the deaths from this virus. How can someone risk his life and the life of others with this deadly COVID and go for a visit? Endangering his own health is one thing, but undermining and violating the quarantine procedures is also another.  What if he were infected, or what if he passed it to those top leaders of Ethiopia? For PIA nothing is lost, either way his numbers are very counted.

Hence, this brings to us a very important question, for Isayas and Dr Abi there must be an important milestone point reached in their hidden agendas, for surely this joy and happiness is part of Dr Abi’s membership to the club (Isayas’s club) and PIA wants to congratulate him.

An ailurophile person wishes and prays all the time to see and contact people with the same interest. If this person hears there is a cat lover even beyond the dangerous waves of the seas, there is no time to waste to risk his/her life to go and meet that person.

The only reason that Isayas Afwerki forced him to take that much risk, to jump on a plane to Ethiopia to visit Abi during this time period, was to congratulate him on his early signs of dictatorship, as well as to award him for his harsh stand against the TPLF (Isayas’s most hated group in the world).

The Professor of dictatorship systematically passes his blueprint (‘How to become a dictator’) to Abi and he looks relieved and happy. The new student is grasping it well and already starting to suspend elections, proclaim a state of emergency; manipulate political opponents and not abide by the rules of law procedures, with a “I am the best for you” personality.

Some of the new actions applauded by his supervisor were because he:

These are all the day-to-day actions of Isayas Afwerki for the last 27 years, and those tactics helped him cling to power. This is a proven medicine of a way towards complete authoritarianism. This character and nature are not new to the international community when practiced by Isaias, but not by the newly Nobel awarded PM of Ethiopia, Dr Abi.
Many Eritreans envied Ethiopia’s road to democratic transition but now looks to be fading, heading into another dangerous territory. If Ethiopians are not careful, and those who blindly support Dr Abi do not withdraw and think twice, it will be too late to tie the halter on him once he starts galloping.

It was said a long time ago that a vine plant asked a turtle to help cross the river. The turtle agreed, and the plant sat on its back and shell. The turtle slowly moved and finally reached the edge of the river. When the turtle asked the plant to come down and leave him, the plant replied, “I have already sent my roots deep down and I cannot come down anymore.”

Isayas Afwerki, back in 1991, was received by the people as a hero, an angel and the only trusted leader to lead the Eritrean people. At that time, few people warned us, and now we are paying the huge price for not listening to those who raised their voices at that time. I myself tarnished them and labelled them as terrorists and backward. Now we regret, and Eritrea and Eritreans is destroyed socially, culturally and economically to the level of no resurrection.

Finally, I advise Ethiopians to be careful and take a strong stand to resist and reclaim back their democratic rights to vote, talk, live and choose. If there is any humble Ethiopia, who will expect Isayas to advise Dr Abi for the good of Ethiopians is just thinking poorly. Isayas’s advice is nothing more than how to control and intimidate to stay in power. This will eventually help Isayas Afwerki to consolidate his dynastic family rule and bring his son to power.

Peace  to Eritrea and Ethiopia

God bless the people of these nations.