Abdela Hagaito, 42, was seen swinging from a tree in a park off of a main highway in the Windy City by a woman on her morning commute.  A Chicago man was found hanged from a 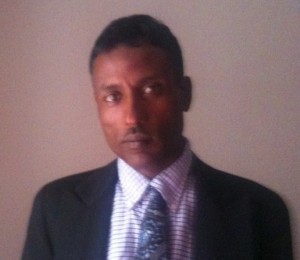 A Chicago man was found hanged from a tree in a park while unsuspecting commuters and joggers sped by.

The man, whom Chicago police identified as 42-year-old Abdela Hagaito, was seen swinging from a tree off of Lake Shore Drive, a main highway in the Windy City, by a woman on her morning commute.

“I saw what looked like a big man hanging from a tree,” Linda Ewen, a caseworker for Chicago’s Department of Human Services told the Chicago Tribune. “I kind of did a double-take, like what the heck, you know?”

Chicago police are investigating the death as a possible suicide but had not determined whether there was any criminal intent as of Monday evening, according to NBC News Chicago.

The hanged man is an immigrant from Eritrea, a father to two young daughters and an alum of Eritrea’s Asmara University, according to what appears to be his Facebook page.

Hagaito’s social media presence shows no sign of despair. He posted photos of happy reunions with loved ones and, as recent as Nov. 4, Hagaito commented on a recently updated profile picture with friends.

“I am so happy to see you,” Hagaito said.