by Habte Hagos; Eritrea Focus Eritrea Focus and Freedom United organised a successful anti-slavery campaign outside the Chelsea Flower Show, London, on 23 and 27 May 2017, the opening and closing days. The event was eloquently 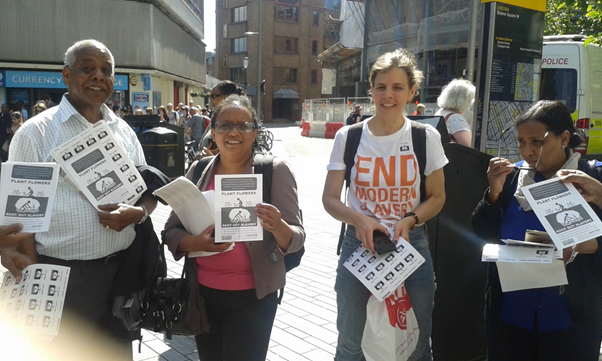 Eritrea Focus and Freedom United organised a successful anti-slavery campaign outside the Chelsea Flower Show, London, on 23 and 27 May 2017, the opening and closing days. The event was eloquently captured by Assenna and can be found [here].

Eritrea Focus is a UK based human rights group that endeavours to engage with decision-makers; including UK & EU parliamentarians and financial institutions to raise awareness of the gross human rights abuses in the country. To this end, Eritrea Focus works in collaboration with other not-for-profit and human rights organisations. Freedom United is a US based non-profit organisation whose vision is “a world where all men, women and children are free from modern slavery” that is underpinned by its mission to inspire people to become a “lifelong abolitionist”.

On 15 May 2017, Eritrea Focus and Freedom United wrote a joint letter to the Royal Horticultural Society (RHS), the organisers of the Chelsea Flower Show, to draw their attention to M & G Investments’ involvement in Nevsun Resources Ltd (Nevsun) which operates the Bisha mine in Eritrea. Specifically, we asked RHS to “support our call on the Chelsea Flower Show’s sponsor, M & G Investments, to divest from Nevsun”. We also advised RHS of our plans to hand out leaflets and stickers outside the venue to raise public awareness of the endemic forced labour in Eritrea which is financed by institutions such as M & G.

This paper aims to build on the campaign and the reasons behind our action. First, let’s start with a brief look at the recent history of the Eritrean extractive sector before moving to the prevailing investment climate in Eritrea, Nevsun and the slave labour lawsuit, and then finally what we can all do to help elevate forced labour.

Eritrea possesses large quantities of mineral resources that are still relatively untouched by modern exploration techniques. The Country’s geology hosts a variety of precious metals, base metals and industrial minerals, most notably gold, copper, nickel, chromite, potash, sulphur, marble and granite. A major belt of sulphide deposits with gold and base metal mineralisation extends over a length of 250 kms from north of Asmara to the Eritrean border to the south. This belt includes the Bisha high-grade zinc-copper-gold deposit. There are indications of similar base metal deposits further north of Kerkebet and Harabsuit and a belt of copper mineralisation in the Raba-Semait area, sulphide-rich gossanous rock in Mt Tullului (Bedeho) in the north and in Mt Seccar and Sheib areas in the Eastern Lowlands[1].

It is not clear which companies are operating in Eritrea since there is little government, company or media information. A joint Eritrea Focus and War on Want research study into the Eritrean extractive sector recently identified 16 companies operating in the Country either at the development or exploration stage. These companies come from various countries; one each from Canada, Australia, Russia, Bermuda, UK, Libya and the United Arab Emirates. A staggering nine, or 56%, are managed by Chinese companies.  Of the four mines under development, two are Chinese and one each from Canada and Australia.

Currently only small or junior mining firms run the Eritrea extractive sector. For example, the UK based company Andiamo Exploration Ltd, is a tiny private company with a staff of about 50 located in London and Asmara. The company has so far not generated any revenue from its operations – in fact its latest balance sheet shows an accumulated loss of c. $1m.

Large and multi-national mining companies are wary of investing in Eritrea, partly because it is a new territory for most miners and also due to the workers allegation of slave labour[2].

The legal framework governing mining in Eritrea is embodied in the Mining Law of 1995 (Proclamation 68), Mining Income Tax Proclamation 69/1995, Regulations on Mining Operations 19/1995 and Mineral Proclamation 165/2011. All mineral resource is publicly owned and the fiscal regime is generous[3].

The Director-general of the Department of Mines claims “Eritrea is very prospective. It is investor-friendly” whilst acknowledging “the threat from Ethiopia makes investors wary”[4].

However, the latest US State Department’s Eritrea Investment Climate Statement (2015) says “The investment climate in Eritrea is not conducive to US investments. While there is opportunity, especially in the extractive industries sector, the Government of the State of Eritrea (GSE) maintains a command economy. The Country’s mandatory national service programme and tendency by the GSE to place persons performing national service in commercial enterprises, may leave businesses open to charges of relying on conscripts as forced labour”. It further warns that “US investors must be aware of the international sanctions regime placed on Eritrea”. The country is ranked 189 out of 189 in the World Bank’s Doing Business (2015) league table.

The US State Department’s assertion is supported by the complete absence of the Eritrean diaspora to invest in their own country of origin, unlike Ethiopians, for example. There is no private sector in Eritrea apart from shops and market stalls. The only local / “private” companies that operate in the country are owned and controlled by PFDJ – the ruling and only party.

Nevsun is listed on the Toronto Stock Exchange and manages the Bisha mine – the company’s only operation in the world, although it has recently (2016) started exploration in Serbia. Bisha is 60 per cent owned by Nevsun and 40 per cent by the State-owned Eritrean National Mining Corporation (ENAMCO). After years of exploration, construction began in 2008 and production of gold was declared in February 2011 but extraction switched to copper in 2012 and also to zinc in 2016. The company says the mine cost is $250 million and that it contains 407 million lbs of copper and 1.7 billion lbs of zinc; according to company figures, these are worth a combined $2.7 billion.[5] The mine is expected to yield copper and zinc until 2025, but further exploration in nearby Harena and Mogoraib River could extend its life. Bisha employs around 1,500 people.[6]

In November 2014, three Eritreans filed a lawsuit against Nevsun in Vancouver alleging the company’s complicity in the use of forced labour by local contractors (Segen) at the Bisha mine. None of the three plaintiffs went through a normal recruitment process and they were instead simply assigned to Nevsun by a local contractor (Segen, which is owned by PFDJ). In a testimony, a former employee claimed “they were under the control of their commanding officer working up to 12 hours a day, 6 days a week.  Segen was receiving $21 per day per worker from Nevsun but the workers themselves were receiving c. $30 per month”. The workers were thus paid only 5% of the sum they earned whilst the government retained the lion’s share. According to the International Labour Organisation “forced or compulsory labour is all work or service which is exacted from any person under the threat of a penalty and for which the person has not offered himself or herself voluntarily”.[7]

The UN Commission of Inquiry on Human Rights in Eritrea (June 2015 & 2016) repeatedly cited appalling labour abuses by the Nevsun’s Eritrean contractors, including forced labour and inhuman living and working conditions. The commission concluded that “forced labour in this context is a practice similar to slavery in its effects and, as such, is prohibited under international human rights law” – paragraphs 1085, 1409, and 1435 in their 2015 report.

In the light of the above assertion, we await with anticipation the outcome of the Canadian lawsuit but given the dossier of evidence available, including evidence from human rights groups, it will be inconceivable for the case to be dismissed.

As noted above, Nevsun is listed on the Toronto Stock Market. The two major shareholders in Nevsun, as of 1 June 2017, are; M & G Investments (UK based and part of the Prudential Group) and BlackRock a US investment Company with a stake of 12.05% and 18.35% respectively of the issued share capital of the Company – a combined total of 30.4%.

Nevsun’s share price has crashed over the last couple of years from its peak of $8.73 to its lowest $2.93 after the Company’s AGM on 3 May 2017, when a petition signed by 189,323 people was brought to the attention of investors and the Company calling shareholders “to stop profiting from slave labour. Divest now!”

Andiam Resources, the British mining company operating in Eritrea, is also similarly funded. Ortac Resources Ltd, listed on the Alternative Investments Market in London, holds 25% of the company. Barclays Stockbrokers, Halifax and HSBC are the major shareholders in Ortac.

What can we do to help stop forced labour in Eritrea’s extractive sector?

The Eritrean regime does not disclose its revenue from mining, there is no published budget and the country’s finances are solely in the hands of the president. The Eritrean people receive no benefits from this income, resulting in an influx of people leaving the country looking for a better life elsewhere and in that process a huge number of Eritreans have perished. We can help by:

Together we can eradicate slavery from Eritrea and create a country that is ruled by law, not fear – a society that is at peace with itself and neighbouring countries.  A country people want to live and invest rather than flee from.