By Eritrea Focus On 15 October 2015, in line of its objective to fight against the root cause of poverty and human rights violation and as part of the worldwide movement for global justice  War On 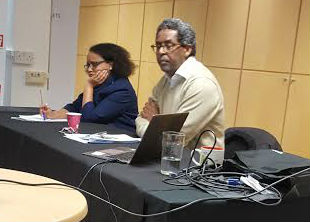 On 15 October 2015, in line of its objective to fight against the root cause of poverty and human rights violation and as part of the worldwide movement for global justice  War On Want (WOW) agreed to collaborate with Eritrea Focus in the campaign to expose the human rights violations in Eritrea.

Areas of joint work proposed are.

The research on mining is nearly complete and a briefing conference took place on Monday 22 March at WOW at 2 pm.  Mr Habte Hagos, introduced the research. He revealed the names of the many mining corporation operating in Eritrea and their indifference to gross abuse of human rights perpetrated by the regime.  He further explained that the corporations are profiting from forced labour. The Canadian company Nevsun is sued in court in Vancouver, British Colombia for its complicity in the use of forced labour.

Habte Hagos is a Fellow of the Association of Chartered Certified Accountants and he has worked at an executive level in London for many years. Habte is a founding member and Chairman of Eritrea Focus. Eritrea Focus is an association of Non-Governmental Organisations (NGOs), human rights organisations, exile and refugee groups and individuals concerned with the gross abuses of human rights in Eritrea. He took the challenge with amazing commitment, sacrificing a lot of his time.  Above all he is action oriented.

Ms Helen Kidan gave a talk for 20 minutes about the gross human rights violation in Eritrea and the campaign for justice she is involved.  She and Habte were given 20 minutes to talk followed by question and answer sessions.

Helen Kidan holds BA (Hons) Joint Major in Politics and Third World Studies and MA in International Relations. Helen is a founding member of Horn Human Rights (set up in 1998 in the aftermath of the border conflict between Eritrea and Ethiopia) and she also helped to set up the Eritrean Youth UK in 2003. She provided a statement to the Human Rights Council in Geneva on the plight of Eritrean women and continues to do advocacy work and lobbying in the UK and in Europe. She is now an active member of Network of Eritreans women in Europe and she recently joined Eritrea Focus.  Helen has an advantage of growing up in UK that enabled her to narrate the human rights violations in fluent English.  She indeed has acquired the skill in transnational activism.

The meeting was well attended. The Eritrean Embassy sent its staff in good number. Recently they have become very visible attending many conferences and meetings on Eritrea. They have also attended the successful APPG meeting in the House of Commons on 27 March 2017.  They are there to defend the repressive regime. However, they know they have no way to deny the reality on the ground.   They have concocted a strategy of diverting the issue in any meeting by raising the problem with Ethiopia. They blame Ethiopia for not abandoning the occupied territory given to Eritrea by the boundary commission. Yes, Ethiopia must vacate the territories but it should not be used as an excuse to subject the population to extreme repression.

The attendance from the Eritrean Diaspora Justice seekers was low due to the timing of the conference which was during normal working hours.  On the other hand, the justice seekers lack resources and are blamed for luck of united action.