By DEBORAH BALL Updated April 19, 2015 6:20 a.m. ET 6 COMMENTS ROME—As many as 700 migrants are believed to have died in a shipwreck about 70 miles from the Libyan coast, according to the United Nations High Commissioner 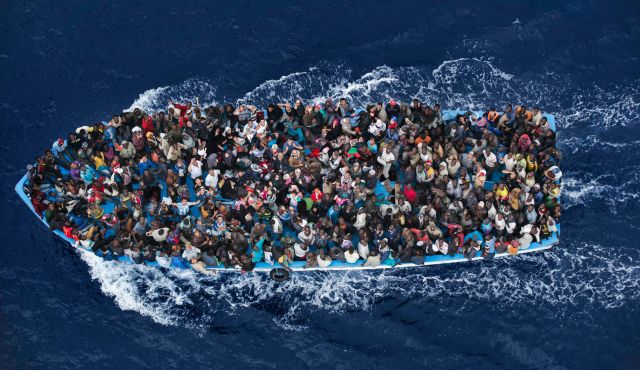 ROME—As many as 700 migrants are believed to have died in a shipwreck about 70 miles from the Libyan coast, according to the United Nations High Commissioner for Refugees.

According to statements from survivors given to the UNHCR, a fishing boat carrying more than 700 people capsized during the night from Saturday and Sunday.

The 20-meter-long fishing boat, which was heavily overcrowded, launched a distress call during the night, the Italian Coast Guard said. The Italians sent a Portuguese mercantile vessel, the King Jacob, to help the boat, but when the migrants saw the ship approach, they rushed to one side, forcing the boat to capsize. Rescue teams saved 28 people and have recovered 24 bodies so far.

The Italian Coast Guard has dispatched 17 ships, including Maltese vessels, Italian fishing boats and other private vessels, to the area to search for other survivors.

Antonino Iraso, an officer with the Italian tax police, whose ships are involved in the search-and-rescue operation, told Italian television that the effort is now aimed at finding bodies, rather than other survivors. He said that the teams have sighted an oil slick, floating life jackets and fragments of wood in the area where the boat sank.

The route from Libya to the tiny Italian island of Lampedusa has become the deadliest migrant route in the world.

If the deaths are confirmed, it would bring to about 1,600 the number of migrants who have died since the start of the year in attempting to make the passage from Libya to Italy. For all of 2014, nearly 3,200 died attempting the passage, according to figures from the International Organization for Migration. According to the IOM, if the 700 deaths are confirmed, it would be one of the highest-ever migrant death tolls in a single incident.

Last year, about 170,000 African and Middle Eastern migrants arrived in Italy using that passage, with a total of nearly 300,000 arrivals in all since the start of 2011.

Conflicts and poverty in African and the Middle East have driven people to attempt the dangerous journey in ever greater numbers. Meanwhile, the dissolution of law and order in Libya has allowed people smugglers to work with impunity. In recent months, the situation has worsened still, as many foreigners who had found work in Libya before the conflict erupted there are now trying to flee the country.

In late 2013, after more than 300 African migrants died in a shipwreck off Lampedusa—the main destination for those departing from Libya because of its proximity to the African coast—the Italian government established a sweeping search-and-rescue program using Navy vessels that patrolled the Libyan coast. While more than 3,000 people nonetheless died attempting the crossing, the aggressive effort helped contain the number of fatalities, according to migrant-aid groups.

But political pressure forced Rome to scrap the program late last year, and it was replaced with limited European Union patrols. That has left the Italian Coast Guard struggling to cope with the huge flow of migrants.

The migrant phenomenon is putting enormous political pressure on Rome. Anti-immigrant parties such as the Northern League have seized on the flows to criticize the government of Prime Minister Matteo Renzi. Authorities in local towns, particularly in the north, are fiercely resisting demands from the Italian Interior Ministry to resettle the migrants in their areas.

The EU is working on a plan to support Italy more in its efforts to cope with the migrant flows. But sharp differences among members, the rise of anti-immigrant sentiment in many countries and the economic downturn has hobbled efforts to find a strong, united response.

Some northern European countries, such as Germany, have criticized Italy for allowing the migrants to move north and request asylum there. International law requires that refugees remain in the country in which they are granted asylum. But Italy has weak policies on resettling and integrating asylum seekers, a situation worsened by the protracted economic downturn here. As a result, migrants avoid being registered by Italian authorities and instead head to Germany and Scandinavia, where support is greater for refugees.

Meanwhile, the increasingly aggressive tactics by people smugglers have raised the danger for the migrants and those involved in rescue attempts. Armed people smugglers have threatened Italian Coast Guard sailors in order to recover a boat they had used for migrants. Earlier this week, Italian police detained 15 African migrants in Sicily after refugees from the same boat said the group had thrown a dozen people overboardbecause they were Christians.