Book Review on: “ THE CURSE OF BEING AND LIVING IT “ by Fetsum Abraham, Copyright 2012

Subject: Book Review on: “ THE CURSE OF BEING AND LIVING IT “ by Fetsum Abraham, Copyright 2012 1. Introduction First of all, let me apologize for my audacity to call my ‘take’ a “Book Review” because, 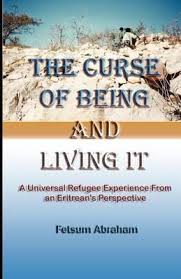 Subject: Book Review on: “ THE CURSE OF BEING AND LIVING IT “ by Fetsum Abraham, Copyright 2012
1. Introduction
First of all, let me apologize for my audacity to call my ‘take’ a “Book Review” because, in all honesty literary world was not my forte in school, though I read a few compulsory books to get my 15” by 13” paper degree attesting that I was in the school for the prescribed period of time, without a single day of absence. There is a lot of inherent anger in that seemingly comical declaration!
2. Discussion
Now, our friend Fetsum Abraham [henceforth, addressed as the Author] decided to challenge us with a bombastic title – and frightening too. And so, the reader is faced with amazing table of contents. With trepidation, the reader turns a page and faces a 52-word “DEDICATION” worth repeating here:
“I dedicate this book to people betrayed by their own revolution; to the unfortunate victims of ego and fear that wasted the best opportunity to influence humanity through political power and to the suffering caused by freedom fighters that ended up becoming the burden of society at the end of the struggle.” Fantastic!
And so, the reader, having thus been aligned with cardinal tone, begins reading the 341-page book with a narration of classical TRAGEDY. The book goes farther and wider to cover: a) admirable autobiography; b) history of Ethiopia-Eritrea; and c) narration of the 30-year war for the liberation of Eritrea up to the concluding tragedy that Eritrea “becoming the burden of [international] society at the end of the struggle”. That is a lot to chew. And so, the Author was forced to curtail his ambition to practicality – a mere 341 pages {5 ½” X 8 ½”, paperback). Perhaps, the Book would have been more effective had it been confined to the subject enunciated in the DEDICATION >>>i.e. the what, the why, the how and by whom. This approach would have contributed immensely in describing the sanity that Eritreans are fumbling to get hold of – through staggering number of “opposition” parties.
Still, The Author must be commended for his effort to put his ideas in a book form, not only for today but also for future generation. We may agree and vehemently disagree with some contents of his book. But the cardinal fundamental issue facing Eritreans now and today is to be on the same wave length for the survival of Eritrea as one country. As a glaring lesson we may pay particular attention to the section on “PSYCHO-ANALYZING PRESIDENT AFWERKI AFTER TW0 DECADES OF HIS LEADERSHIP – p243”. Full understanding of the narration in the book is very essential for the way ahead in the redemption of Eritrea. It is absolutely essential for the Eritrean people to understand where they went wrong and consequently how they came to be “the burden of” international community around the Globe. We owe it to ourselves, not to be emotional but to face the truth – regardless of how much it hurts. In this endeavour, nicety, bravado, and hollow pride do not contribute to the solution. Only rational TRUTH will align Eritrea onto the right direction – in harmony with, not against, the imperfect interdependent world of ours. We should be careful not to be our own enemy!!! In this connection, there should never be a temptation for ‘temporary’ restriction on the freedom of expression of the Eritrean people by Eritrean authorities for any reason what so ever. It is an illusion to expect that deliberate temporary curtail of freedom, for any cooked reason, would somehow be reversed to democratic system of governance down the road. It won’t! The pillars of Democracy, Freedom of Expression and Justice must NEVER be tampered under any circumstance or temporary excuses. But alas! The circular question gnaws at us is this: Is Eritrea willing (and indeed ready) to establish such institutions?
3. Issayas Afewrki’s Mind set
The mentality of issayas Afewerki within the frame of psycho-analysis mentioned above is well described on page 289 as follows:
“ Mr Afwerki seems to think that Eritrea and Eritreans belong to him and that they have no right to decide for themselves, since he decides for them. His administration imposes indefinite forced labor camp based slavery. He abuses public resources by jailing people and the heroes of the struggle without explanation. He controls the economy. He does not think Eritreans deserve a constitution and an impartial justice system, because these rights are none of their business but rather his. He does not think Eritreans need the press to communicate with their government because the state media does it for them”

Obviously Issayas Afewerki has the lowest opinion about Eritreans, bordering outright hatred. The cardinal question is: WHY? In order to answer that question the broad aspect of “The Psychology of Dictators” is discussed in the book, starting at page 291 with well documented referrals to related literary works. The Author should be commended for tackling a complex subject outside the realm of his profession – as he candidly pointed out.
Having said that however, a gem of a psychological thread seems to be missing as to why Issayas Afewerki Abraha would turn against his own entire population of admirers, believers, worshipers to his personality, without an iota of doubt, and placing him on a pedestal next to God? What triggered him to be one of the cruelest of the cruelest persons in the world, against his own people? [1}

And if Life has to go on, what would be the LESSON that Eritreans would derive out of (and act upon) the horrible experience and pass it along to their future generation – in whatever shape or form that future generation may be? If Eritreans continue with their parochial squabbling, the LESSON that may have been derived out of the ugly experience would simply vanish with the wind. And so goes Eritrea to the wilderness! A classical TRAGEDY, indeed!
4. Conclusion of the Book
The Author concluded in the simplest and effective form by declaring that the “ball is in the court of the people” (p335). Will Eritreans continue to argue, based on destructive parochial matters, on how to LOOK at the shape of the “ball” rather than at SCORING a point? The choice is ours >>> continue with being OBSERVANT indefinitely or be FREE and own the future?

5. Editorial >>> Proper Name
The Author, for his own reasoning, follows the naming-custom of the Western Society as opposed to the Eritrean custom, which served very well. He addresses the President of Eritrea as “Mr. Afwerki”, “President Afwerki” instead of Ato, Ayte or Mr “Issayas”, followed by the father’s name, “Abraham”. The name “Issayas” does not even appear in the book, except only once (spelled “Isaias”) on the back photo page (p341) and another on the back cover! The reason for this deviation (preference) is not explained in the book, thus creating confusion now, and perhaps to future generation of Eritrean Historians, as to ‘who is who’ and ‘who did what’ in the narration.
There is also a small matter of spelling: The spelling of the President’s father name is ‘AFWERKI’ instead of ‘AFEWERKI’. The reader can’t help wondering about the inherent preference of the first spelling over the last one – after all, both are derivative of Geez. [ “ኣፈወርቂ”፤ “ኣፍወርቂ”]
Finally, recognition must be given to the Author for being civil and respectful to the President of Eritrea [regardless of the deceiving trajectory of how it came about] addressing him as “His Excellency” etc leaving aside the emotional, hateful and unflattering caricature in the Internet. The short and paramount message is this: the salvation of Eritrea does NOT depend in rowdiness and name calling, but on mature, thoughtful and dignified manner of pursuing the cardinal issue at hand >>> THE LIBERATION OF ERITREANS and let the crimes committed by Eritreans on Eritreans during the last 55-years to future Eritrean judicial system. Cross your fingers! It will be horrendous uphill civil battle; it must be expected.

My commentary cannot be complete without the following observation about the Author’s admirable integrity. It is on page 127 of the book. In one of his visits to his Family, the Author learned from his father of the blood relationship between his father and Issays’s father. His father wanted to send a letter of introduction to Issayas with the Author. The Author refused flatly!
As a reader I am truly impressed by the Author’s sense of neutrality in a society in which ‘blood relationship’ means everything – to the point of even skewing the truth of history. The Author, in his entire book, didn’t show any sign of ameliorating the reality of Eritrean history as orchestrated by his close relative. On the contrary, he didn’t mince words to expose his cousin’s history (in its broad spectrum) in the struggle for the true liberation of Eritrea to this day. It is a refreshing example. Thank You, Mr. Fetsum Abraham.
THE END
17 August 2016
———————————
Footnote
{1} I stumbled over the following ‘stand-alone’ text in my disorderly file. It is dated “31 Oct. 2015”. Regardless of the reason for its being, I thought it is appropriate to include it here as a footnote for what ever it is worth:
“ By the time Issayas [whether he looks like Stalin, Hitler, Idi Amin…] is through with his vengeance and deep hatred, Eritrea, in the parlance of the Tigrigna language, will be “zeytiblaE zeytiste”. Issayas has accomplished what he set out to do, with the help of the manipulated Eritrean people and especially with the highly educated sector of the nation who were part and parcel of him, as knowledgeable people!!! Their vast superior knowledge couldn’t cut through the mind of a 21-year-old, first year college drop-out. It is not an exaggeration to say that Issayas knew the psyche of the Eritrean people deeply than any other soul on that Land. The epitome devilish accomplishment of Issayas is the ultimate daring scheme to arrest the mind, body, and soul of the Eritrean people – and he succeeded. Exaggeration? Let the eighty (80) “opposition” parties and civil organizations, safely situated in foreign countries, prove it otherwise. THE END”