Some 2,000 asylum seekers from Eritrea protested Tuesday in Israel, demanding the European Union moves to try senior members of the Eritrean government for crimes against humanity. Rallying outside the EU's representative office in Ramat Gan, 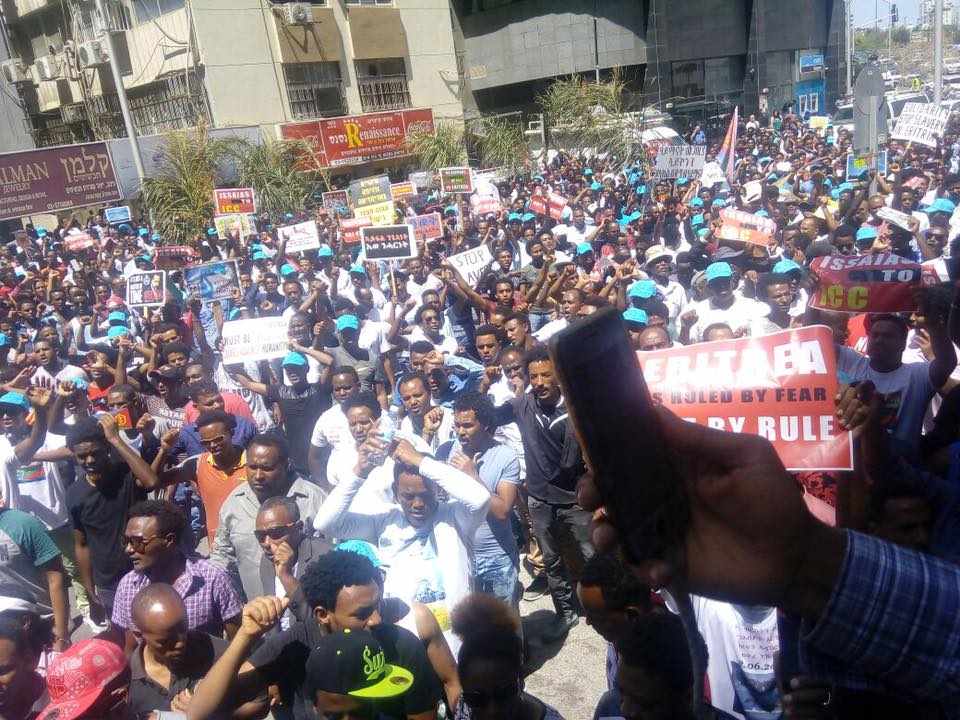 Some 2,000 asylum seekers from Eritrea protested Tuesday in Israel, demanding the European Union moves to try senior members of the Eritrean government for crimes against humanity.
Rallying outside the EU’s representative office in Ramat Gan, they called for the EU to adopt a recent UN report which recommends brining members of their belligerent government before the International Court of Justice. The protest was held against the backdrop of Europe’s decision to give Eritrea economic support, with the goal of preventing African refugees from arriving in Europe.
Protesters arrived on 22 buses from Israel’s Holot detention center, where asylum seekers and migrants denied residence visas are held without trial.

Signs carried by demonstrators bore photographs of Eritrean President Isaias Afwerki  and slogans demanding that he face the World Court in the Hague. “The game is over,” the protesters changed. “twenty-five years of crimes against humanity and Eritrea,” “Stop the slavery in Eritrea.”
A letter to the EU was also read aloud: “We stand here today to say our thanks to the UN investigation commission. Two weeks ago their experts said that they estimate there are about 400,000 enslaved people in Eritrea. We believe the international community including the European Union in particular are interested in resolving the problem in a way that will work for everyone,” it said.
“We hope the UN investigative team will make the EU nations and Israel advance the cause of human dignity, justice and truth,” the letter also said.

Mologata Tomozgehy, one of the organizers, said the protesters want to see Eritrea’s president punished “because he’s a murderer.”
The UN report calls on the UN Security Council to adopt sanctions against Eritrea and try its leaders for crimes.
Among the crimes cited in the report are charges that  the Asmara government forcibly recruits its citizens to the military for an unlimited amount of time, executes prisoners without trial, tortures and sexually enslaves citizens.
Haaretz.com – by Ofra Edelman