NEW HAVEN — New Haven diners who ate regularly at Caffe Adulis from 1992-2008 knew the affable chef Ficre Ghebreyesus as the man introducing them to the exotic cuisine of his native Eritrea. What they didn’t know 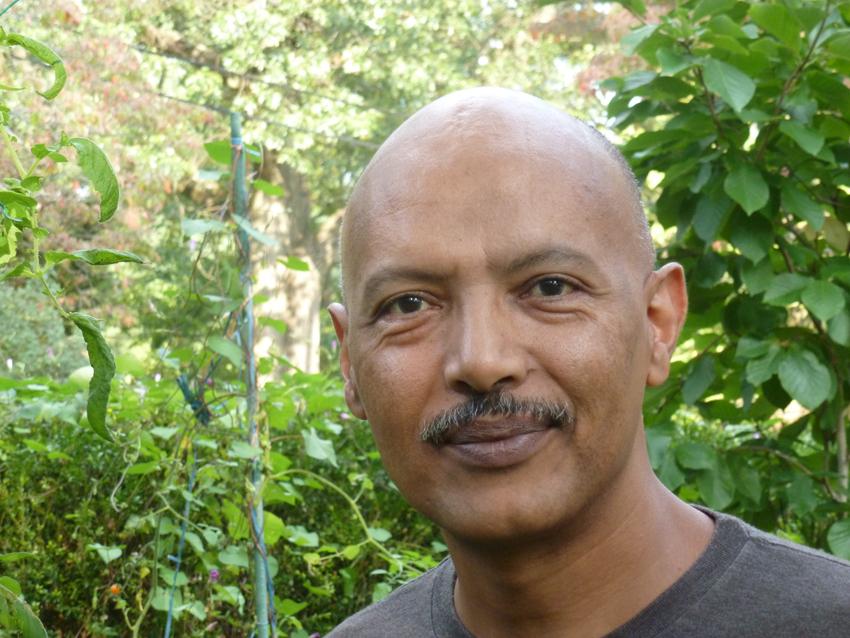 NEW HAVEN — New Haven diners who ate regularly at Caffe Adulis from 1992-2008 knew the affable chef Ficre Ghebreyesus as the man introducing them to the exotic cuisine of his native Eritrea.
What they didn’t know is that when the chef went home, he headed to his studio to paint — prolifically and often until dawn.

Few, other than close friends and his wife, Elizabeth Alexander, the renowned Yale professor and poet who penned the poem for Barack Obama’s first inauguration, were fully aware of how skilled he was and what his art meant to him.

Sadly, Ghebreyesus died suddenly on April 4, 2012. Artspace gallery lets the rest of us into Ghebreyesus’ world with the first exhibition of his work, “Polychromasia: Selected Paintings by Ficre Ghebreyesus,” running through April 24.

Artspace Executive Director Helen Kauder and Ghebreyesus first became friends when the gallery was located in the basement of Caffe Adulis, and he and his brothers would donate food to Artspace openings.

“I persuaded him to take a studio at Erector Square for City-Wide Open Studios,” she says, “so we had a strong connection.”

She approached Alexander in December with the idea of an exhibit, “because he died so suddenly, a lot of people in the community hadn’t had a chance to make sense of it and say goodbye.”

The exhibit, which had one of the largest openings in memory at Artspace, was curated by Key Jo Lee, a student of Alexander’s and a Yale doctoral candidate pursuing a joint degree in history of art and African American studies.

It’s a taste of the man’s life, from his humble beginnings in an East African nation torn asunder by war, to his time in New Haven with Alexander and their two sons, a joyful life rich in scholarly as well as family pursuits.

Alexander, who wrote one of the essays in the catalog, talks about her husband’s insatiable curiosity for art, books and language.

In honor of all those interests, she has organized An Evening of Music and Poetry, featuring Pulitzer Prize winners Yusef Komunyankaa and Tracy K. Smith, with Kevin Young, Hettie Jones and Aracelis Girmay, Friday from 5-7 p.m. at Artspace.

As one walks through the gallery, there is at once a feeling of joy and sadness. One can’t help but be touched by this colorful, skillful work, and Alexander’s words about urging him to show his work, echo. “People will know this work after I’m gone, sweetie,” he told her.

The artist’s statement is Ghebreyesus’ 2000 essay for his application to the Yale School of Art, from which he received an MFA in 2002, a mixed experience of which Alexander writes, “His particular African disapora aesthetics were sometimes misread by teachers.”

The exhibit is a fraction of the more than 800 items, including paintings, film, photography, 3-D works, works on paper, posters Lee cataloged in the Livingston Street home.

“What I wanted to accomplish in this show was to give an understanding of the diversity of his mode of working. This doesn’t even give us the full spectrum of the mood of his work, because his early work is very dark, dealing with life in Eritrea,” she says.

She calls Ghebreyesus “a colorist,” a gift that may have come from his mother, whose meticulously cared-for home was filled with colorful baskets and objects, her clothes trimmed in cheery textiles.

That influence is a motif that pops up over and over in his works, most dominantly in the large “City With River Running Through,” which also reveals his penchant for inserting lines through parts of the work or sometimes even objects, as he does in “Fish,” one of many works in which fish, an homage to his native country and perhaps even his culinary trade, repeat.

There’s a playfulness and a sobriety and sometimes a combination of both in the same work. “Red River” is a riot of color with a definite nod to Matisse’s work of the same name, but Ghebreyesus places a Yoruba warrior on a donkey amid a landscape of monochromatic red flowers. “Solitary Boat in Red and Blue” might either be a lonely vessel in a strange sea (or new land), or a whimsical vessel awaiting an adventure

Lee has made sure to include Ghebreyesus’ later abstracts which also incorporated text and poetry and show the versatility as well as transformation of his oeuvre, one tragically complete with the unfinished “Horseman,” which he was painting just days before he died.