Africa: A Rough Guide to Foreign Military Bases in Africa 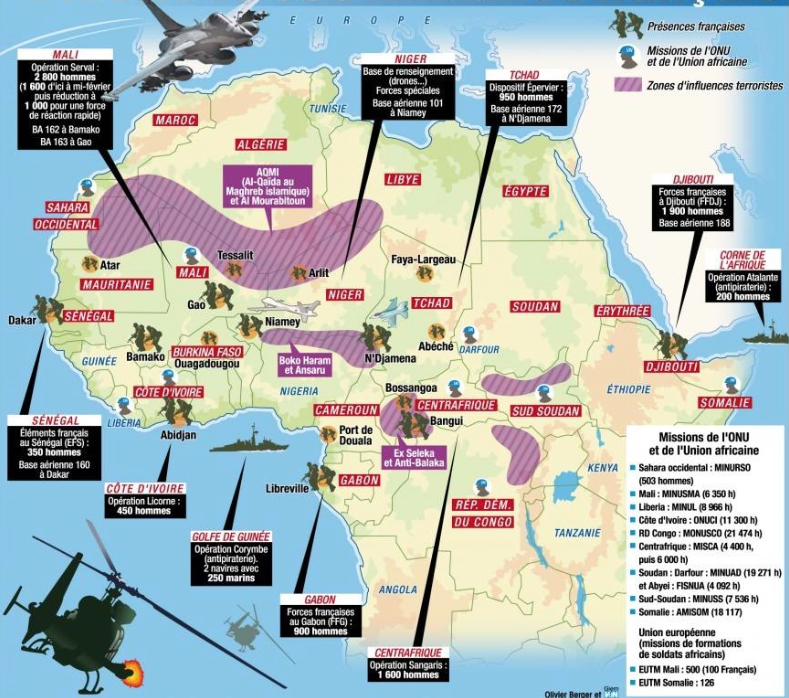 It’s a symptom of the fragility of African states, and the power of external interests. The long and inglorious history of intervention runs from colonial and post-colonial struggles, through to the Cold War, and up to the present day.

But we are now in a complex, multipolar world. The “war on terror”, the arrival of China, and the emergence of regional powers, jostling for influence, has complicated the map. Nothing better illustrates this than the spread of foreign bases on African soil.

The twin hotspots are the Sahel and the Horn of Africa. “It’s where Europe touches Africa, and where Africa touches the Middle East,” explained the Africa director for the International Crisis Group, Comfort Ero.

The Sahel controls the migration route that conveys young men and women across the Mediterranean. It’s also a zone of instability, where al-Qaeda, so-called Islamic State and Boko Haram operate. It’s where state administration and even basic services are absent, encouraging that flow.

From bases across the region, US drones and French soldiers have joined African armies to push the militants into the remote hinterlands. But blasting Jihadists from the sky does not win the hearts and minds argument.

“The challenge is, despite the rise of new security structures in the last few years, they haven’t done much to change the [political] dynamic on the ground,” Ero told IRIN.

Those alliances also give leaders like Idriss Déby in Chad and Ismaïl Omar Guelleh in Djibouti some regime security and a pass on their dodgy human rights record.

And Guelleh has milked it. Djibouti lies on the Bab-el-Mandeb Strait, a gateway to the Suez Canal, one of the world’s busiest shipping lanes. It’s also a waypoint between Africa, India, and the Middle East, and makes a lot of money from hosting seven armies – America, China, Italy, France, Germany, Japan, Spain, and soon Saudi Arabia.

The lease on the only permanent US military base in Africa, Camp Lemonnier is $63 million a year. China, building its own facility at the other end of the Gulf of Tadjoura, gets a bargain at $20 million. Only Iran seems to have been refused a berth in Djibouti.

The following is a rough guide to whose boots are where in Africa.

Djibouti: China is building its first overseas military base at the port of Obock, across the Gulf of Tadjoura from the US Expeditionary Base at Camp Lemonnier. It’s the latest in China’s $12 billion investments in Djibouti, including a new port, airports and the Ethiopia-Djibouti rail line. The base will have the capacity to house several thousand troops, and is expected to help provide security for China’s interests in the rest of the Horn of Africa.

Cote d’Ivoire: The facility at Port-Bouët, a suburb of Abidjan, is to be expanded from 500 to 900 men and form a forward operating base for West Africa.

Gabon: A key base that has contributed troops to France’s interventions in Central African Republic.

Niger: An air transport base at Niamey international airport to support Germany’s growing troop contribution to the UN mission in Mali.

Madagascar: India’s first foreign listening post was set up in northern Madagascar in 2007 to keep an eye on ship movements in the Indian Ocean and listen in on maritime communications.

The Seychelles: Has allocated land on Assumption Island for India to build its first naval base in the Indian Ocean region. The ostensible interest is counter-piracy, but India also seems to be keeping an eye on China.

Djibouti: Since 2011, a contingent of 180 troops has occupied a 12-hectare site next to Camp Lemonnier. This year, the outpost will be expanded. The move is seen as a counter to Chinese influence, linked to a new strategic engagement with Africa, underlined by the Sixth Tokyo International Conference on African Development held in Nairobi last year.

Djibouti: After falling out with Djibouti, Riyadh is now finalising an agreement to build a new base. Saudi Arabia is leading a coalition fighting Houthi rebels in Yemen, across the narrow Bab-el-Mandeb Strait.

Somalia: Ankara’s first military base in Africa is a training facility for Somali troops. Turkey has steadily increased its influence in Somalia, with major development and commercial projects. In 2011, then Turkish Prime Minister Recep Tayyip Erdogan became the first foreign leader to visit Mogadishu since the start of the civil war.

Eritrea: In 2015, the UAE began developing the mothballed deepwater port of Assab and its 3,500-metre runway, capable of landing large transport planes. Assab is now the UAE’s main logistics hub for all operations in Yemen, including the naval blockade of the Red Sea ports of Mokha and Hodeida. In return, the isolated Eritrean government has received a financial and infrastructural aid package.

Somalia: The UAE trains and equips Somalia’s counterterrorism unit and National Intelligence and Security Agency. It also supports the Puntland Maritime Police Force, which is believed to have played a role in interdicting Iranian weapons smuggling to the Houthis.

Somaliland: The UAE has a 30-year lease on a naval and airbase at the port of Berbera. Last year, Dubai Ports World won a contract to manage and double the size of the port, ending Djibouti’s monopoly on Ethiopia’s freight traffic. The UAE is reportedly providing military training and a security guarantee to the self-declared independent territory.

Burkina Faso: A “cooperative security location” in Ouagadougou provides surveillance and intelligence over the Sahel.

Cameroon: Garoua airport in northern Cameroon is also a drone base targeting Boko Haram in northeastern Nigeria. It houses unarmed Predator drones and some 300 US soldiers.

Chad: Predator and Reaper drones are based in the capital, Ndjamena.

Djibouti: Camp Lemonnier, a 200-hectare expeditionary base housing some 3,200 US soldiers and civilians next to the international airport. Home to the Combined Joint Task Force – Horn of Africa of the US Africa Command, it is the only permanent US military base in Africa.

Ethiopia: A small drone facility at Arba Minch was operational since 2011 but is now believed to have closed.

Kenya: Camp Simba in Manda Bay is a base for naval personnel and Green Berets. It also houses armed drones for operations in Somalia and Yemen.

Niger: An initial base in Niamey has been overshadowed by Agadez, capable of handling large transport aircraft and armed Reaper drones. The base covers the Sahel and the Lake Chad Basin

Somalia: US commandos are operating from compounds in Kismayo and Baledogle.

The Seychelles: Drone operations from a base on the island of Victoria.

Uganda: PC-12 surveillance aircraft fly from Entebbe airport as part of the US special forces mission helping the Ugandan army hunt for Joseph Kony and the Lord’s Resistance Army.

Read the original article on IRIN.