A strategic port is booming yet politically vulnerable 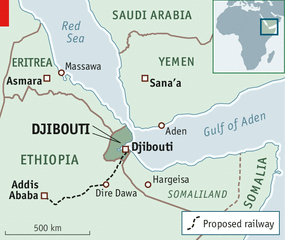 A strategic port is booming yet politically vulnerable

A RED shipping container is suspended from a crane above a tandoori-hot dock alongside the freighter on which it has just crossed the Indian Ocean. Suddenly something goes slightly wrong. The container slips, maybe by a foot: no harm done. Perhaps a mechanical fault is to blame, or a gust of wind that feels like the opening of an oven door. Men in bright vests scurry around the dock in a panic, trying to find the culprit. In Djibouti the port is everything.

No country depends more on a string of jetties than this former French territory on the Red Sea. Other states, such as Singapore and Hong Kong, that also began as ports have diversified in recent decades, but not Djibouti. It lacks the skilled workforce to become a financial-services centre. Yet thanks to three unrelated developments it has turned into an ever more extraordinary transit hub.

First, its backdoor leads to the world’s most populous landlocked country, Ethiopia, home to a fast-growing economy that needs access to the sea. Most of the food, oil and consumer goods imported for Ethiopia’s 83m-plus people passes through Djibouti. Instability in Ethiopia’s eastern neighbour, Somalia, and bad blood with Ethiopia’s other old enemy, Eritrea, mean that Djibouti is the only main transit option. Hence a new railway line to Addis Ababa, Ethiopia’s capital, is being built.

At the same time, freighters chugging between Europe and Asia have been seeking an alternative to their traditional halfway stop in Dubai, which involves a detour into the Gulf. Djibouti is more directly en route. In 2009 it spent $400m on a state-of-the-art container terminal, the only one in the region. In the five previous years, trade volume had already doubled and is set to do so again. To expand still more, Djibouti’s port authority is close to securing $4.4 billion from abroad for another five terminals which, it is hoped, will be ready in the next four years.

Third, the woes of Djibouti’s neighbours have brought the world’s most powerful navies to its shores. Piracy in Somalia and anti-terror campaigns on the Arabian peninsula, only 32km (20 miles) away across the water, have created what a new report by Chatham House, a London-based think-tank, calls an “international maritime and military laboratory”.

The United States is the biggest lab rat. Djibouti hosts the only permanent American base in Africa, home to 3,200 people, not all of them naval. Since 2010, American drones have been flying from Camp Lemonnier, beside the main airport, making it the busiest base for drones outside Afghanistan. Some 50 military flights take off every day, including a squadron of F-15E jets, which arrived in 2011. The Pentagon has drawn up plans to spend $1.4 billion to expand the base and triple the number of its special forces there to more than 1,000.

France, the former colonial master, still guarantees Djibouti’s security and keeps 2,000 troops there. The port-state also hosts the biggest military presence of Japan and China outside Asia, both drawn by the fight against Somali piracy. Along with Western countries, they co-operate keenly to protect commercial vessels—though everyone spies on each other. Djibouti also often hosts security-minded delegations from Russia, Iran and India. Even in the cold war, rarely was neutral territory so colourful or crowded.

All this toing and froing has brought Djibouti windfall revenues. President Ismail Omar Guelleh, whose family has been in charge since independence in 1977, dishes out a good slice of it to the country’s small elite, which is gratefully compliant. The rest of the almost 1m inhabitants are among the poorest in Africa, with 60% of them unemployed.

Rattled by the Arab spring and fearing that even minor instability could frighten away foreign military friends and investors, the president has embarked on a carefully staged course of political reform. During legislative elections in February a fifth of the seats were allocated in proportion to votes cast rather than under the previous winner-takes-all system that has long favoured the president’s allies.

Opposition parties were given access to state media and allowed to hold rallies. They won 16 out of 65 seats but then alleged fraud, leading to demonstrations, street clashes with the police and the incarceration of the leading protesters. For the moment, the president’s attempt to create a veneer of democratic respectability has been thwarted. Voters turn out to be trickier to handle than containers.