A naturalized citizen’s call for moderation on immigration

By Arkan Haile The America of the moment feels a little different, not quite as free or brave. Nativism, xenophobia and isolationism have taken a firm hold of our politics, as reflected by the steady stream of 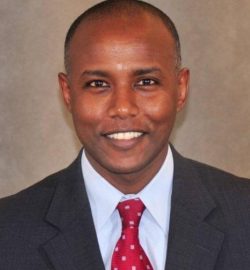 The America of the moment feels a little different, not quite as free or brave. Nativism, xenophobia and isolationism have taken a firm hold of our politics, as reflected by the steady stream of new laws or proposals designed to wall off the world (literally or figuratively) or diminish the aspirations of immigrants.

A rightsizing of our immigration policies may be in order, but the indiscriminate and sometimes hateful nature of the effort reeks of something un-American, at least the America I’ve known since immigrating here more than three decades ago.

Colorado Senate Bill 17-120, proposed earlier this year, is typical of the effort. It required citizenship for law enforcement officers over its sponsors’ unsupported claims that immigrants lack the requisite values and national allegiance for the job. The sponsors were aware of only 25 non-citizen officers serving among the state’s 246 law enforcement agencies.

The bill passed the state Senate despite opposition from Colorado chiefs of police and county sheriffs, who found the claims baseless and the remedy counterproductive. It ultimately failed to pass into law but succeeded in reminding immigrants and foreigners that they are increasingly unwelcome in this country.

The irony is that this country has a continuing need for immigrants, who are essential contributors to the American economy and way of life. Approximately 2 million, or 11 percent, of our military veterans are immigrants or children of immigrants (so much for immigrants lacking values and allegiance). Immigrants hold the overwhelming number of the dirtiest, most physically demanding and dangerous jobs, which native-born workers typically don’t want. They start 25 percent of all new businesses despite making up 13 percent of the population. Immigrants started more than 50 percent of all billion-dollar startups, and immigrants or their children founded 40 percent of the Fortune 500 companies.

I immigrated to the United States at age 10, along with my mother and two younger siblings, on Dec. 18, 1981. We spent most of that year escaping from the murderous Soviet-backed Ethiopian regime known as the Dergue and living as a displaced people in Sudan. My father was already in the U.S., initially as a graduate student on a government scholarship and later as an aslyee after Ethiopia aligned itself with the communist bloc. I was happy to put our precarious existence behind us and happier to see my father for the first time in six years. I was instantly and forever grateful for my new country but very wary of what lay ahead.

We settled in Fort Collins in the dead of winter. We might as well have landed on Mars.  Seemingly everything was new and strange. I was unfamiliar with the people and their culture and language. I struggled to make sense of the cold and snow. Even our “mobile home” was a puzzle — how can it be both? I vividly recall thinking on my first waking day in America, in knee deep snow, “This is like being born again except I’m 10 years behind my peers.”

For a competitive kid it was a crushing realization. I joke I had my midlife crisis as a preteen.  It wasn’t so funny then.

Shortly after arriving I was invited to a sleepover by a classmate. I was still getting by on “No speak English.” It struck me as an oddly intimate offer to make to a stranger, a foreigner at that. I accepted, with extreme reluctance. I stayed up a good part of the night, unable to ward off paranoid thoughts of what “these people” might have in store for me. Nothing, as it turned out. Sleep deprivation aside it was as mundane as it was revealing. I learned I could trust these people, a hopeful sign.

I would learn many more lessons over the coming years and decades, not all positively affirming, but through it all I came to believe in the fundamental goodness of the American people. There is a fearless spirit of tolerance, generosity and optimism that cuts across Americans of all stripes. It’s infectious. I was made to feel like a member of the club, not the outcast that I once assumed was my fate. My American dream was not achieved by personal accomplishments or material possessions but by the reality of living in a free society among such a people. It’s a rare luxury in this world.

At present, we are as likely to inspire fear, which is also infectious. Many immigrants — and native-born who “look foreign” — are living with a heightened sense of anxiety, if not dread. I imagine my 10-year-old self, today, wondering why this mighty nation finds my family so scary. We’re better than this.

President Barack Obama, son of an African immigrant, once said, “In no other country on Earth is my story even possible.” My own relatively modest story — of an African refugee turned corporate lawyer — is unlikely to have been possible in any other country. The same is true of countless other immigrants and children of immigrants, throughout history, with similarly improbable or uniquely American stories. Then again, the story of the immigrant in America is the story of America.

We must address our concerns in a more measured, creative and humane manner for the sake of all involved. Of course, there are legitimate issues for which there are no easy answers. Incorporating a foreign people, especially in large numbers, is not a trivial undertaking.

Those on this side of the debate must acknowledge as much and proceed more honestly and reasonably. Those on the other side must appreciate the need or desire for immigrants throughout our society and the limits of the law in dealing with those who are here illegally, and proceed in a more pragmatic fashion. Wherever we end up, collectively, let’s get there living up to our ideals rather than down to our base fears and tribal instincts.

Arkan Haile is senior corporate counsel at NGL Energy Partners. He is a 1990 graduate of Fort Collins High School.