A DUTCH MAYOR BANS ERITREAN POLITICAL MEETING IN THE NETHERLANDS GIVING IN TO PRESSURE FROM ANGRY ERITREAN REFUGEES.

Michael Abraha The key note speaker was to be Senior Official Mr. Yemane Gebreab at the city of Veldhoven where 650 young Eritrean regime supporters were expected to take part during the Easter Holiday weekend. Gebreab 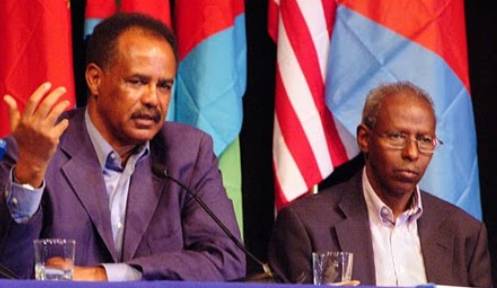 The key note speaker was to be Senior Official Mr. Yemane Gebreab at the city of Veldhoven where 650 young Eritrean regime supporters were expected to take part during the Easter Holiday weekend. Gebreab is the right hand man of Pres Isaias Afewerki who has been in power for over 25 years.

These annual gatherings have been taking place in several European cities over the years and the scrapping of this weekend’s conference is unprecedented with serious repercussions for the future of such gatherings. It means the Eritrean govt may no longer claim that it still controls supporters’ activities in Europe and may have to change tactics.

More importantly, it is high time for the Eritrean govt to realize that the status quo has run its course and it is time for Isaias and Yemane to start listening to the protesters who went through hell serving in open ended military service, then had to flee through heavily mined crossing points, and then moving on to the most torturous, deadly journey across the sea into Europe.

These are the lucky few to reach civilized societies where they can freely voice their deepest frustrations and disappointments without fear remembering well that there are hundreds of thousands of frustrated youngsters going through shitty existence inside Eritrea or in Sudan or Ethiopia as refugees.

They still love the homeland and would never hesitate to sacrifice their lives to ensure that its territorial integrity, sovereignty and independence are protected and upheld.

DEAR PRES ISAIAS AND ADVISER YEMANE: You were once young full of zeal and idealism when the bloody struggle for Eritrean self-determination and independence was fully under way in the late 60s and early 70s. And you chose to join in and play your part not just to free Eritrea from Ethiopia but also to have Eritreans enjoy liberty, democracy and free speech which they were deprived of by Emperor Haile Selassie and later Mengistu Hailemariam. Now you are repeating what these Ethiopian leaders did to Eritreans, only that you are much worse.

With due respect, as state leaders at the helm, you have the obligation to listen to the legitimate questions and concerns of these young Eritrean nationals who have been forced to become refugees in the Netherlands and other parts of Europe. What good is it for you to spend comfortable time at a conference with those who worship you and would never challenge you.

Nobody is challenging your Communist ideology. But the country is moving backwards not because of the massive exodus of our most productive labor forces whose departure also signifies the low morale of our fighters. This is easy to grasp unless you wish to dance with your head in the sand.

In my view, what the protesters in Veldhoven, Holland, are offering is pure, down to earth imagination and idealism. The country’s future is at risk unless our youth’s idealism and imagination are respected and promoted.