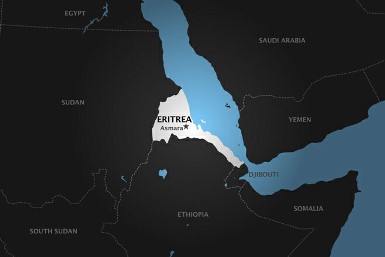 Reflecting on the systemic exclusion of blacks from the equality America promises its citizens, Langston Hughes, in 1938, wrote:

America never was America to me….

There’s never been equality for me,

Nor freedom in this “homeland of the free”

As Eritrea celebrates its 27th year of independence as a totalitarian state, similar thoughts come to mind. The bright future we all imagined in 1991 is nothing but fading memory today. The heavy sacrifices made in blood and limb were supposed to give birth to a free, inclusive and vibrant nation for all its citizens to realize their dreams within. Instead, 474,296 fled the country by 2015 (UNHR). Eritrea was never Eritrea, at least to these half million, who believed escape was their only relief from servitude.

Way back in 1988, when I was a believer, I wrote a letter to Ato Hagos Gebrehiwot through the EPLF office in California (with cc to RICE and others). I had just returned from Singapore and Hong Kong, with the hopeful thought the vibrancy I saw there can be mirrored in an independent Eritrea. At the time, the old Soviet system was also getting unglued under Gorbachev’s glasnost and perestroika (openness and reconstruction) with dire implications to Menghistu’s Ethiopia. The dawn of Eritrea’s independence seemed imminent.

With that in mind and a bit of naiveté on my part (reflecting on it now), the letter pleaded the EPLF to be more inclusive than it had been. It also urged for free Eritrea to take Singapore and Hong Kong as models of its economic progress.

The regime crushed the idea of inclusiveness immediately, banning citizens from engaging in the affairs of their own country (no ‘Hashewye’). But it continued to dangle the carrot of another Singapore in the Horn of Africa a bit longer. Soon, regime owned entities started to dominate the business sector. With that, the Singapore tease came to a crashing end. The abuses got progressively worse, eventually gutting out the nation’s insides (Fig 2).

The broad 20-60 cycle includes acquisition of higher education, fine-tuning careers and building families. Critical experiences and wealth are accumulated and re-invested to solidify existing foundations. In the spirit of “society grows great when elders plant trees under whose shade they know they will never sit”, those over 60 continue to re-enforce these foundations further by sharing their collective wisdom and experiences. 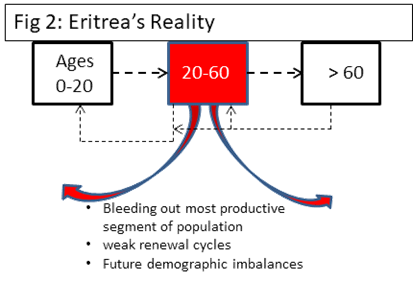 Unfortunately, Eritrea has been hemorrhaging this critical 20-60 link in the middle, starving the population pools on both sides. By contrast, with its pipelines relatively intact, it is encouraging to see what appears to be a dynamic young leader emerging from next-door Ethiopia. Given the feudal mindset of Eritrea’s ossified leadership and the massive exodus it has caused, however, someone like PM Abiy Ahmed emerging in Eritrea any time soon seems fairly remote. Why? Sustainable change can only come from inside Eritrea but the resource pool most likely to demand and bring about the desired change is drying up. Pockets of courage do pop up every now and then– like the Catholic bishops, wed Ali, Haji Musa; and though belatedly, the G-15, finance minister Berhane Abrehe and others. Yet, we consistently fail to pick up their batons, leaving them exposed and vulnerable — letting the momentum of the day die quickly. It is a worrisome culture where courage is not valued as a virtue worthy of our protection, leaving the villain as the only victor.

After 20 plus years, the opposition remains too fragmented to be of any threat to the regime. The regime is more likely to die suffocated under its own dead weight than through our efforts. The regime won. Not because it is better but because we are worse. At least this much must be admitted.

Over the years, I supported some groups and joined others as a member. All failed to execute their stated missions. One of the civic groups I joined affiliated itself with a political group violating its own mission statement. The second started out to develop an action plan with sufficient common ground for the various civic and political groups to rally around. Four years in, there was nothing to write home about. I am not a member of any group now but there is no escaping the fact that, I too, failed. Quite simply, I did not bring enough to the table to make a difference either.

If the opposition camp is to matter, these bad practices must be addressed honestly and directly: regular self-assessment how well we are executing against our stated missions – how close are we to the end goal, what is working, what is not and why; start and end meetings on time; show some humility; stop attacking each other (to see even non-political groups engaging in this is sad); collaborate to multiply individual efforts; deep and honest self-examination to see if the self (me, you, at the individual level) is truly liberated from biases against the “other”. A truly self-liberated Eritrean – one who has shed his/her  gender, ethnic, religious and regional biases; and one who fully accepts and supports a woman, an Afar, a Kunama, a Moslem, a Christian, a lowlander, a highlander to lead Eritrea at any level is a rarity. As obvious as this is, it is scary that we fall short repeatedly.

We all say we are for democracy and justice with no commitment to either. Even the feudal regime propagates this lie through its PFDJ acronym.

We have been “solving” the wrong “problems” for too long. To make matters worse, the only “solutions” in our tool box – exclusion and brute force – remain the same. I can’t even recall a single dispute for which our politics found a fair and lasting peaceful resolution since 1961. The enemy of the day may change — ELF, EPLF, menakaE, business people, criminal amiches, the educated, religious ‘extremists’, G-15, buildings to demolish, currency to be confiscated, elderly ‘criminals’ whose adult children fled the country, neighboring countries etc., etc. And each wrong “solution” breeds more false problems. Seventy odd years later, the national despair and poverty is deeper than ever.

If poverty did not exist in the world, it probably would have been invented in Eritrea. Human life — the only thing that should matter the most — is the cheapest commodity in Eritrea today. This devaluation of human life is the real problem we should have been solving all along. It is also the one we have been ignoring consistently.  We are in love with a geography that can’t love us back. In fact, geography is like a prostitute. It doesn’t even care whose flag is planted on it.

Our priorities are upside down. Eritreans drown in the Mediterranean and other nations show compassion and hang their flags half-mast. Not Eritrea. Awet nHafash has never (as in never) matched words with deeds (awaj of the day: people escaping slave labor camps will be shot — AwetnHafash). The regime never comes to the defense of its people (Libya, Sinai etc) but has no problem sacrificing them in mass for its reckless adventures. We build a monument for Pushkin, whose dubious ancestor left way before Eritrea was even Eritrea; but not for those who died for it. The colonial nostalgia lingers on, devaluing that which is ours.

WORSE THAN WE THOUGHT

Surprisingly, Ambassador Andebrhan’s book shows the culture of exclusion spares no one. He quotes a wounded Isaias saying “I know you call me Agame behind my back. I will show you! I will take this country down as I put it up”. But this is more about Andebrhan than about Isaias. It is bad enough Isaias tells them this to their faces. The real question is: what did Andebrhan and his senior peers do to re-assert their own life-long contributions and to honor those they left behind? That they don’t push back to cage his arrogance and meekly taking their place as if they were wall paper is puzzling.

But Isaias could also have said: “but remember the Agame is your boss now. What do you say to that, you Agame- serving Eritrawi?” as a humorous way to diffuse the slight. No adults in the room?

It was also dis-orienting to see Andebrhan write as a mere observer without a hint of self-examination.  In spite of his decade’s long elite status as a senior member of the regime (before and after 1991), he reports from a convenient distance to say the “regime has abused… Eritrean society”, that Isaias is “selfish to the core”, and “vindictive to the extreme”. Thathe is “ruthless in his punishment of ‘disloyalty’” where “no one is spared or forgiven; not even his most loyal henchmen or his closest comrades-in-arms”.

Good heavens!! First, Andebrhan and his peers ARE the regime. And knowing all these, they willfully condemned the unsuspecting population (and themselves) to the terrors of this thug? Those who we believed (at least I did) to be less than no one, were enablers all along is hard to take in.

Eritreans are strange creatures. In his trademark vulgar style, Isaias says diaspora Eritreans will only come home in caskets and will not live in the houses they are building. Yet, these very people support him, hoping to “protect” the houses he tells them they won’t enjoy. The caskets may not be welcome either.  Some villages are asking relatives not to send bodies home because there is shortage of young people in the villages to dig burial grounds (Fig 2). Maybe Isaias is right to say he can destroy the country after all. Those he despises so openly – senior tegadelti, diaspora fools whose money he is after and even some refugees in Israel who justify their asylum applications on his brutality – turn out to be his key enablers and die-hard supporters. How is that for irony?

CAN ERITREA BE ERITREA AGAIN?

Eritrea is a lawless nation. Random “laws” can pop up over-night to demolish homes families have been living in for years; or to limit the amount you can withdraw from your own savings. Easy answer: if you can’t withdraw your own money from the bank, then keep it at home, right? But then an aggressive confiscation campaign kicks in to punish the very behavior the law encouraged in the first place. You just can’t win. Eritreans now go to Sudan for their simple health care needs as the regime closes functioning “Catholic” clinics; there are no safety nets against poverty – even highly educated professionals cannot survive without remittances. The list is too long.

Our culture of exclusion is killing us. The regime doesn’t talk to anyone. The numerous opposition groups don’t even talk within each other. It is time for a new approach. A “positive jealousy” for what Ethiopia is doing would be a good start. i.e. forgive and start direct dialog with ALL actors. Create a bigger tent. IF we can do that, then, yes, Eritrea can become the Eritrea we imagined in 1991 again – free, inclusive and economically viable.  It is a big IF but as bad as things were in 1938, Langston Hughes also finished with a loud optimism to say:

The land that never has been yet—

And yet must be—the land where every man is free.

And he was right. The damage is deep and the journey to recovery long, but amen to that for Eritrea too.