Al Mukalla: Yemen’s Minister of Fisheries said that Eritrean authorities have released 154 Yemeni fishermen who were arrested in the Red Sea months ago and they are now in a coastal region in the southern 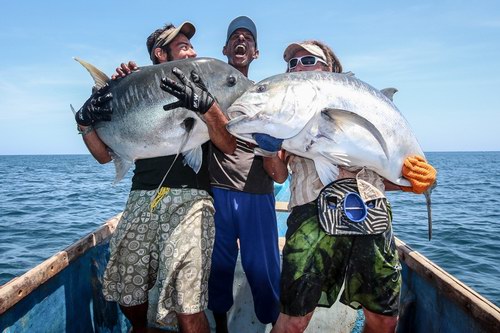 Al Mukalla: Yemen’s Minister of Fisheries said that Eritrean authorities have released 154 Yemeni fishermen who were arrested in the Red Sea months ago and they are now in a coastal region in the southern province of Lahej.

Fahed Kafayen told Gulf News on Wednesday that his ministry formed a committee to look into whether the fishermen were subjected any kind of mistreatment during detention in Eritrea.

“I have asked local authorities in Lahj to help the fishermen reunite with their families,”

A territorial dispute between the countries over Zukur-Hanish archipelago led to Eritrean invasion of Hanish Island in 1995.

Yemen regained control of the islands three years after the Permanent Court Arbitration ruled that they belong to Yemen, but gave the Eritreans the right to fish in their waters.

The minister said his ministry is still receiving reports about missing fishermen in the Red Sea and he suspects they might have been detained by Eritrea.

Meanwhile, local media reports in Yemen said a senior military figure loyal to the ousted president Ali Abdullah Saleh was killed in a Saudi-led coalition air strike in Al Houthis heartland in northern Yemen. Al Masdar Online reported on Wednesday that Colonel Abdul Khaled Saleh Al Bayadhi, a commander in the elite Special Forces, was killed in Saada several days ago. Saleh’s supporters on social media mourned the death of Al Baydhi and claimed he was killed in clashes wish the Saudi army in the Saudi province of Najran.

Military sources in the southern city of Taiz said that a senior Al Houthis commander called Hussain Ali Al Yarie was killed in clashes with the government forces on Monday on eastern suburbs of the city.

On Tuesday, Mansour Al Hassani, a spokesperson for the government loyalists, told Gulf News that 41 Al Houthis were killed in two days of intensive fighting in Taiz.

In the province of Shabwa, residents said that a suspected US drone fired missiles at a car carrying suspected Al Qaida militants in a remote area near the giant Balhaf gas export terminal on Tuesday night. Aden Al Ghad said that the drone destroyed the car and killed and injured several militants.