May 6, 2014 (KHARTOUM) – The Eritrean president, Isaias Afewerki, will arrive in Khartoum on Thursday to hold talks with his Sudanese counterpart, Omer Hassan Al-Bashir, to discuss bilateral ties and means for furthering cooperation 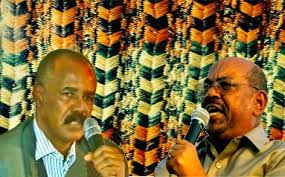 May 6, 2014 (KHARTOUM) – The Eritrean president, Isaias Afewerki, will arrive in Khartoum on Thursday to hold talks with his Sudanese counterpart, Omer Hassan Al-Bashir, to discuss bilateral ties and means for furthering cooperation between the two countries.

Informed sources told the pro-government al-Rayaamdaily newspaper on Tuesday, that Afewerki will be accompanied by several ministers and advisors.

The same sources stressed that a summit between the two presidents will be followed by a ministerial meeting to discuss bilateral relations besides regional and international issues of common concern.

It added that Afewerki’s program of work would include field visits to several projects and large enterprises on top of which is Al-Gaili oil refinery.

Last April, Bashir disclosed during a visit to Sudan’s eastern state of Kassala intends to establish a joint Sudanese-Eritrean force to combat human trafficking and smuggling.

He said that Khartoum would provide Asmara with its fuel needs in order to curb smuggling, underscoring existence of a high level of security coordination between the two countries to control borders and achieve security and stability.

Bashir also called upon the government of Kassala state to carry out its responsibilities in order to achieve the required living standard for the residents along the borders.

The head of neighboring countries’ department at the foreign ministry, Ibrahim Bushra, described ties between Sudan and Eritrea as good, pointing to the repeated mutual visits of the two leaders.

Bushra added that Bashir had in the past offered to mediate between Eritrea and Ethiopia in order to clear the atmosphere between the two neighboring countries.

He further stressed that Sudan supports the regional campaign led by Eritrea to lift the sanctions imposed upon it by the United States, saying that Sudan suffers from similar sanctions.

Eritrea became an independent state in 1991 after a bloody war of independence with Ethiopia. The two countries fought a border war in 1998-2000 that has killed an estimated 70,000 people.

The two East African adversaries remain at loggerheads since the disputed key town of Badme had been awarded to Eritrea by an international border commission.