In High Court discussion, state says deal reached whereby undisclosed country will absorb illegal migrants from Eritrea. A third country has agreed to absorb the majority of Eritrean migrants to be deported from Israel, it emerged 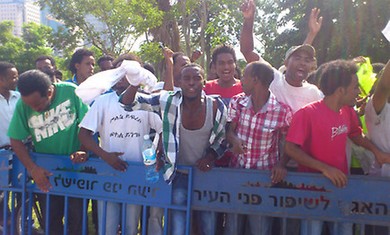 A third country has agreed to absorb the majority of Eritrean migrants to be deported from Israel, it emerged during a hearing at the High Court on Sunday.

Attorney Yochi Gnessin, representing the state, said a third country had agreed to take in the Eritrean deportees when the time comes, and that Israel was in talks with two other countries to allow Sudanese migrants to return by way of their territory, as was done for an estimated 2,100 Sudanese who have returned to Sudan from Israel through a third country.

Gnessin also said that the percentage of Eritreans in Israel who were dissidents who opposed the regime was very small, and that the state was expected to reject nearly all of the asylum requests for the around 35,000 or so Eritreans in the country.

Following the statement by Gnessin, the court ordered the Justice Ministry to present an explanation of the agreement reached, including the countries involved. A ministry representative said that when the information was presented to the court, it would most likely be released to the public.

Gnessin’s statement came during a hearing held before a panel of nine High Court justices on a petition to overturn the amendment to the Prevention of Infiltration Law (1954) that was passed by the Knesset in January 2012. Some 2,000 people are being held under the amendment, which allows detention for at least three years of a person caught illegally entering the country.

On March 12, the High Court issued a conditional order against the state regarding the amendment, demanding a response to the claim that it violates the fundamental rights of African migrants.

The order did freeze implementation of the law. The order was given in response to a petition filed by six migrants’ rights organizations, including the Association of Civil Rights for Israel on its own behalf and on behalf of five Eritrean asylum-seekers, including a child, being held indefinitely in detention camps.

The petition stated that most of the detainees are from Sudan and Eritrea, countries to which “the Israeli government itself recognizes that it cannot deport people because of their expected fate upon their return.”

The petition argues that under Israeli and international law, the state cannot detain migrants in cases where they cannot be deported. It added that the law also violates the Basic Law: Human Dignity and Liberty, which would require the High Court to strike it down.

In an unusual development, the UN, which has repeatedly been publicly critical of the amendment, filed an amicus curiae brief on the subject.

Prime Minister Binyamin Netanyahu, meanwhile, responded to statistics released by the Population, Immigration, and Borders Authority on Sunday showing that only two infiltrators came across the southern border last month, as opposed to 2,031 in May 2012, by saying that the fence built on the Egyptian border achieved its aims.

Netanyahu shepherded through construction of the NIS 1.6 billion, 230-kilometer fence that was completed in January.

The prime minister said that now, since the waves of infiltrators had been stemmed, it was necessary to focus on sending back those infiltrators illegally in the country.

“We will also achieve that goal,” he said.

In December, Netanyahu appointed former Mossad official Hagai Hadas as his envoy to spearhead efforts to send the migrants back home or find third countries willing to take them.

Diplomatic officials said they did not know whether Hadas had indeed succeeded in finding a third country to take the infiltrators.

The Foreign Ministry, meanwhile, refrained from commenting on the state’s claim that an undisclosed third country had agreed to absorb the majority of Eritreans who illegally entered Israel.

A ministry official said Sunday was the first time he had heard of such an agreement, adding that it sounded implausible that a third country would agree to take in tens of thousands of Eritrean asylum- seekers. He said it was most likely that there was an agreement for a certain country to be used as a transit point for returning Eritreans, and that Israel probably would not have the money to pay the incentives necessary to convince a third country to take the deportees in indefinitely.

Officials at the Interior Ministry and PIBA both referred questions about the reported agreement to the Justice Ministry.