South African President Jacob Zuma on Thursday appealed for calm as a wave of anti-immigrant violence spread to Johannesburg, raising fears the country's dire economic woes could spark widespread unrest. At least six people have been 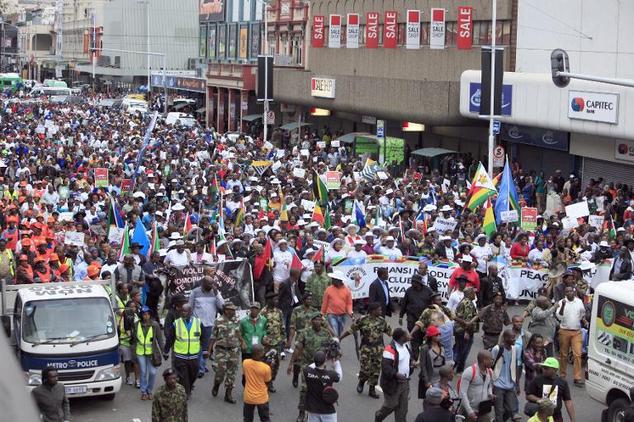 At least six people have been killed in the last two weeks in attacks in the Indian Ocean city of Durban that targeted shops and homes owned by Somalis, Ethiopians, Malawians and other immigrants.

Police in the Actonville area of Johannesburg used tear gas and rubber bullets to disperse hundreds of anti-immigrant protesters on Thursday, while foreign-owned shops in the Jeppestown area of the city were attacked overnight.

“We have witnessed shocking and unacceptable incidents of violence directed at foreign nationals,” Zuma told parliament in Cape Town.

“No amount of frustration or anger can ever justify the attacks on foreign nationals and the looting of their shops.

“We appeal for calm, an end to the violence, and restraint.

“The police have been directed to work round the clock to protect both foreign nationals and citizens and to arrest looters.”

Thousands of people marched through Durban to call for better protection for immigrants, more than 1,000 of whom have fled their homes in the city and sought shelter in camps.

Marchers chanted “Down with xenophobia!” and “A United Africa” at an event attended by residents, students and local religious and political leaders.

Police have vowed to quell the unrest, which claimed its latest victim on Monday when a 14-year-old boy was killed in KwaMashu, a township north of Durban.

“There are tensions in various parts of the country between some locals and foreign nationals (but) lawlessness will not be tolerated,” National Police Commissioner General Riah Phiyega said in a statement.

Police, who also reported tensions in Pietermaritzburg, a city some 80 kilometres (50 miles) from Durban, called for community leaders to help reduce friction and added that false rumours of attacks were increasing fear.

Earlier this year, similar xenophobic violence erupted in Soweto, near Johannesburg, as frustration deepens over lack of opportunities for many young blacks 21 years after the end of apartheid in 1994.

South Africa’s economic growth was just 1.5 percent last year and unemployment is at around 25 percent — soaring to over 50 percent among the young.

Violence against immigrants in South Africa is common, with unemployed locals accusing foreigners of taking their jobs.

In 2008, 62 people were killed in xenophobic violence in Johannesburg townships.

One of the marchers in Durban, Eric Machi, 34, said he rented rooms to Zimbabweans and Malawians until they fled from attackers in recent weeks.

“We are trying to make peace with those people who came here from Africa, but now they are gone,” he said.

“It started late at night. The attackers were shouting and throwing stones, and breaking some houses.”

Zuma told parliament he wanted to address the root cause of the attacks — including illegal immigration and accusations that many migrants are criminals.

“Many (immigrants) bring skills that are scarce that help us to develop the economy and are most welcome to live our country.

Many shops in the centre of Johannesburg were shut on Wednesday and Thursday after threats spread via social networks and text messages.

“Anytime (it) can happen now,” said Ali Abdi, a Somali who runs a clothes shop but is now sleeping in a camp in Durban.

“There is not just one reason. Some of it is foreigner hatred, especially against African foreigners. The other reason would be jealousy.”