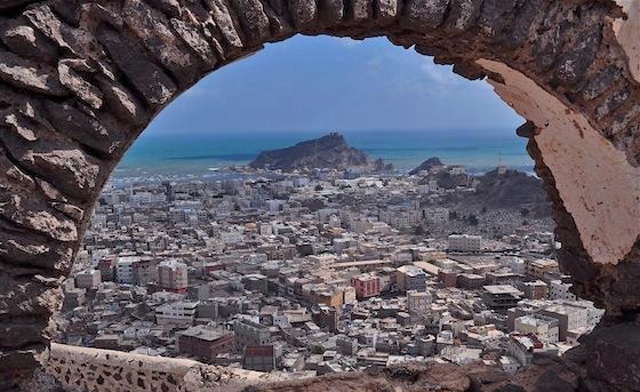 “…Huzeifi did not say how the delegation reached Aden….But Saudi-owned daily Asharq al-Awsat quoted a Saudi security official as saying that they had flown from Riyadh to Eritrea and then travelled on by boat.”

Aden (AFP) – Yemeni ministers have arrived back in Aden from Saudi exile after the government announced the “liberation” of the country’s second city from Iran-backed rebels, the interior minister said on Saturday.

It is the first time members of the internationally recognised government have returned to their homeland since the Huthi Shiite rebels entered the southern port city in March, forcing President Abedrabbo Mansour Hadi and his ministers to flee their last refuge.

Huzeifi did not say how the delegation reached Aden.

But Saudi-owned daily Asharq al-Awsat quoted a Saudi security official as saying that they had flown from Riyadh to Eritrea and then travelled on by boat.

The minister said that the rebels had been pushed out of the city, except for “few besieged groups that are refusing to surrender.”

The Riyadh-based government said on Friday that its loyalists had freed the city after four months of ferocious fighting with rebels and renegade troops loyal to Hadi’s ousted predecessor, veteran strongman Ali Abdullah Saleh.

“The government announces the liberation of the province of Aden,” Vice President Khaled Bahah said on Facebook.

A spokesman for the rebel forces dismissed the boast as “psychological warfare and an attempt to improve the crushed morale” of loyalist fighters.

“The advance that they are boasting about does not exceed a few kilometres (couple of miles) here and there over front lines where they incurred heavy losses,” the spokesman said in a statement carried by the rebel-controlled news agency.

Witnesses said the rebels remained in control of the city’s Al-Tawahi district on Saturday and that heavy fighting was continuing there.

Southern militiamen of the Popular Resistance launched Operation Golden Arrow against the rebels on Tuesday, boosted by reinforcements freshly trained and equipped in Saudi Arabia.

A Saudi-led coalition has also kept up the air campaign it launched in March.

AFP could not independently verify the toll.

In an assault on the rebel-held Al-Anad air base, north of Aden — Yemen’s largest — they captured 47 fighters, including officers of the Republican Guard which has remained loyal to Saleh, he said.

Witnesses said that the attack was backed by Saudi-led air strikes on the base.

Aden was Hadi’s last refuge after he fled the capital Sanaa earlier this year as the rebels took over the government and launched an offensive in which they seized much of the country.

Swathes of the city have been reduced to rubble by the four months of ferocious fighting.

The United Nations has declared Yemen a level-3 humanitarian emergency, the highest on its scale.

After weeks of shuttle diplomacy between the two sides, it announced a humanitarian truce last weekend to allow the delivery of desperately needed relief supplies, but the ceasefire failed to take hold.

More than 3,200 people have been killed in the fighting — many of them civilians, the UN says.

AFP: Yemen ministers back from Saudi exile in ‘liberated’ Aden