Assenna.com News In a two-hour long interview with ERI-TV that took place on 27 Jan 2017, Isaias Afwerki, the Eritrean president, referred to the leaders of EU as insane for helping Eritrean refugees in Ethiopia and 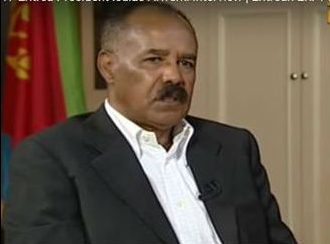 In a two-hour long interview with ERI-TV that took place on 27 Jan 2017, Isaias Afwerki, the Eritrean president, referred to the leaders of EU as insane for helping Eritrean refugees in Ethiopia and Sudan. Angered by EU’s funding for two projects designed to aid Eritrean refugees in Ethiopia and Eastern Sudan that are worth €500 million and €170 million respectively (in 2016), the president labelled the aid packages as ill-conceived conspiracies to deplete the country of its youth.  The interview, produced for local consumption, made numerous intemperate claims including the West’s elaborate scheme to squash Eritrea.

‘The world has declared war on Eritrea’, said the president.  ‘The main aim of this conspiracy is to dampen our resolve by enticing our youth out of the country’, he added.  ‘The money is earmarked for the upkeep of and to create jobs for Eritrea refugees outside the county which I find totally bizarre’, he said.  ‘Why doesn’t the EU give us the money to train our youth in our country instead?’, he argued without mentioning why tens of thousands of young Eritreans took flight, making Eritrea one of the world’s top producers of refugees.

President Afwerki equally blasted the aid package that was granted to Sudan.  ‘According to the donors’, claimed the president, ‘the plan is designed to enhance the capacity of reception centres in Eastern Sudan that are supposedly overwhelmed by thousands upon thousands of Eritrean refugees’.  Having questioned the motives behind the West’s generosity, the president re-iterated his claims by saying: ‘this is an organized machination by the West to weaken Eritrea’. However, the president fell short in explaining why the West is hell-bent on weakening the small east African country.

The rest of the interview focused on hurdles to the economic development of the country. He explained in detail the chronic shortages of supply of electricity and energy in urban areas. He acknowledged that factories are sitting idly because there is not enough supply of water and electricity. He said there is enough water in the country’s dams and reservoirs and yet there are no functioning water supply networks.  He openly touched on infrastructure problems such as roads, sea freights services and air transportation that have failed to facilitate adequate public services.  Again, the president failed to mention that Eritrea is lacking resources and professionals to maintain such services.   There are no well-trained experts in the country. And many of the trained personnel had fled the country.

In what seemed inadvertent, the president admitted that the majority of the country’s budget is spent on wages for armed forces, security institutions and government employees. He ignored to mention the role the private sector plays in the country because it is of little consequence within the scheme of things in the country’s economy.  He re-assured the public that the government has plans in pipelines to rectify those major scarcities. However, it is to be remembered that similar pledges were made last year and the year before regarding water and electricity shortages.

The president took ample time to explain why wages-increase, which was promised last year, failed to materialize. Instead he went on to explain why the government took action in improve the purchasing power of the Nakfa, the country’s currency. He launched into a long-winded explanation of how the plan was not carried out as planned by talking about market speculation, metrics, consumer protection, fiscal policy, income distribution, market failures, risk and return, human resources and more without addressing why the government failed to make good on its promises.  Lastly, he spoke of the chronic shortage of living accommodations for people in government and forces employed by the government. He blamed the shortage on greedy landlords. Although it was not clearly delineated, the president fired warning shots to home-owners.

Lastly, the president expressed his frustration in catching up with corrupt official, traffickers, and money-launderers without addressing the implications of last year’s change of currency, ‘money rationing’ and other financial constraints prevalent in Asmara and other towns.  He concluded by saying the government has devised plans that have yet to be prioritized concerning urgencies within Education, Health, agriculture, communications and other sectors. The rest of the interview will be aired today at8:00, local time.