Between 2007 and 2015, Export-Import Bank provided 48 insurance policies to Connell Company to work with mining companies in seven African countries An obscure US government agency has provided $315m in taxpayer-supported financing over the past 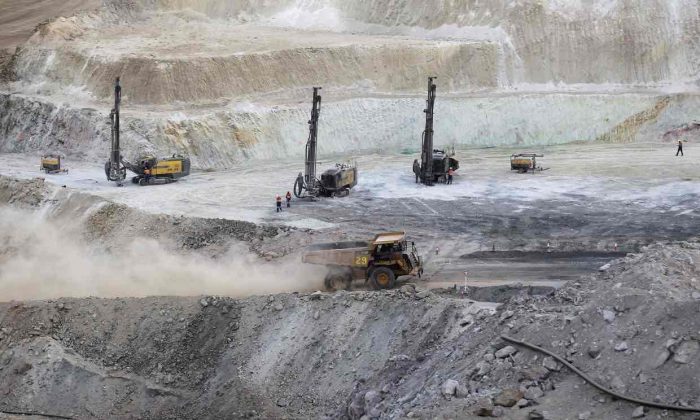 Between 2007 and 2015, Export-Import Bank provided 48 insurance policies to Connell Company to work with mining companies in seven African countries

An obscure US government agency has provided $315m in taxpayer-supported financing over the past decade to a company that has supplied equipment to African mines accused of slave labor, human rights violations and environmental destruction.

Between 2007 and 2015, the US Export-Import Bank provided 48 insurance policies to the New Jersey-headquartered Connell Company to pursue deals with at least 17 mining companies in seven sub-Saharan countries. These included a $20,000 policy to supply equipment to the Bisha copper mine in Eritrea, which is being investigated by a Canadian court amid accusations of slavery, according to an investigation of the bank by the Guardian and the Columbia University Graduate School of Journalism’s Energy and Environment Reporting Project.

The bank provides US exporters with financing – in the form of loans, guarantees and insurance policies – to sell goods and services overseas. Bank officials say they create US jobs and fill a financing gap by allowing companies to access funding when private lenders will not.

But Nevsun Resources, the Canadian mining company that controls Bisha, faces a lawsuit in which 30 plaintiffs allege that the mine engaged two Eritrean state-run contractors and the army to force hundreds of military conscripts to work there under abhorrent conditions.

“The financing that Connell is getting is quite significant,” said Doug Norlen, director of economic policy for Friends of the Earth US. “Whether it’s loans or insurance, the same obligations exist to carry out human rights due diligence. Some of these projects are associated with some pretty serious human rights abuses.”

The bank also insured export deals between Connell and seven mining companies in the Katanga region of the Democratic Republic of Congo, where the proximity of mines to villages means thousands of people are exposed to fumes, dust, noise and effluent water, says the Centre for Research on Multinational Corporations.

The group says that addressing Katanga’s human rights and environmental violations requires the engagement of all actors in the mineral supply chain, including mining equipment providers and financiers – such as Connell and the US Export-Import Bank.

The Connell Company, an opaque business conglomerate founded in 1926 and managed by four generations of the Connell family, is one the top 40 recipients of the bank’s insurance policies. Commercial banks, such as Wells Fargo and JP Morgan, are the largest recipients – receiving more than $30bn of the more than $50bn the bank authorized in insurance policies between 2007 and 2016.

The government-backed insurance policies protected Connell against buyer non-payment, in effect transferring the risk of doing business in these troubled countries to US taxpayers.

Caroline Scullin, the bank’s senior vice-president for communications, said that short-term insurance deals – like those it provided Connell – were not subject to environmental and social due diligence procedures.

“Short-term insurance does not cover projects per se; rather, it generally covers goods that are not capital in nature or destined for new projects,” she said.

But to critics of the bank, this lack of oversight means the US is potentially financing corrupt and dangerous projects across the globe.

“In the case of a mine, the mining equipment is the most central thing that enables a project to move forward,” said Norlen.

He said the bank’s lack of due diligence violated the UN’s Guiding Principles on Business and Human Rights, which stipulate that export credit agencies are responsible for investigating projects that could involve human rights abuses before financing.

The bank, instead, follows guidance from the Organisation for Economic Cooperation and Development, which Norlen says is weaker than the UN’s rules.

The Connell Company, which is privately owned, does not release financial information to the public, but its website describes it as “one of the largest diversified” companies in the United States.

Connell did not respond to repeated requests for comment.

Allegations of forced labor in a repressive country

The bank has supplied a safety net of insurance policies for Connell in mineral-rich sub-Saharan countries such as the Democratic Republic of Congo, Liberia, Eritrea and Mauritania, which have been associated with corruption, political violence and internal instability in recent years, according to organizations such as Human Rights Watch and Amnesty International.

For instance, in 2010, the bank approved an insurance deal between Connell and Eritrea’s Bisha mine, which is at the center of a slave labor lawsuit brought by 29 men and one woman who say they were forced to work at the mine.

In affidavits, claimants say they were abducted from their villages and forced to work shifts of over 12 hours, with barely any food or water. These abuses allegedly began in 2003 and continued after 2010.

“The case alleges that military intelligence forces actually operated inside the mine and detained and disappeared people working at Bisha, and that several conscripted laborers were tortured,” said Matt Eisenbrandt, who works as legal director for the Canadian Center for International Justice, and who is part of the legal team representing the claimants.

Nevsun issued a statement in October saying it was considering appealing against the supreme court of British Columbia’s decision to proceed with the case, and that the company complies with “international standards of governance, workplace conditions, health, safety and human rights”.

The company referred all reporters’ questions to the statement.

“Beyond just the issue of forced labor, the bigger picture is that Eritrea is an incredibly repressive country. Any company that is providing funding, or equipment or insurance, has to go in there with its eyes open and do its due diligence,” adds Eisenbrandt.

An ore deposit five times the size of Central Park

Another Connell client in the region that has received scrutiny is Ambatovy, a cobalt and nickel mine in Madagascar operated by the Toronto-based Sherritt International Corporation. Between 2010 and 2012, Connell was provided with about $500,000 worth of insurance policies to supply goods to the mine. TheAmbatovy development includes an ore deposit that covers 1,600 hectares (almost 4,000 acres, or a space roughly five times the size of New York’s Central Park), a 220km (137-mile) pipeline (equal to the distance between Los Angeles to San Diego) and a processing plant the size of 250 football fields.

Although Ambatovy has an environmental management program, biologists say this gigantic project has scarred an ecologically unique country whose lush forests are home to hundreds of native animals, including about 100 species of lemurs, as well as the cat-like fossa.

“The Ambatovy mine has destroyed a lot of primary rainforest habitat in Madagascar,” said Chris Raxworthy, a curator-in-charge at the American Museum of Natural History, who has studied reptiles and amphibians in the African island country since 1985. “At the moment, it is not clear what positive offsets the mine development has provided for Madagascar’s biodiversity.”

According to the Center for Responsive Politics, the Connell Company donated almost $5.8m to politicians from 1990 to 2016. The company’s founder and CEO, Grover Connell, has contributed almost $800,000 over the past 20 years, mainly to the Democratic party, which has long supported the bank on the grounds that it helps export-oriented companies create jobs.

While regulatory loopholes allow the bank to skip due diligence procedures for many of Connell’s deals, their 40-year relationship was celebrated in 2014, when the company was honored with the bank’s sub-Saharan AfricaExporter of the Year award.

The partnership between the bank and Connell “is bringing new economic opportunity to sub-Saharan Africa, while creating jobs at home”, read astatement released by the bank about the award. “It’s a win-win.”

The Energy and Environmental Reporting Project is supported by the Blanchette Hooker Rockefeller Fund, Energy Foundation, Open Society Foundations, Rockefeller Brothers Fund, Rockefeller Family Fund, Lorana Sullivan Foundation and Tellus Mater Foundation. The funders have no involvement in or influence over the articles produced by project fellows in collaboration with the Guardian