April 13, 2013 (JUBA) – Friday’s meeting between South Sudan president, Salva Kiir and his Sudan counterpart, Omer Ahmed Al-Bashir has widely been viewed as gesture of improve relations between the two ex foes. The two 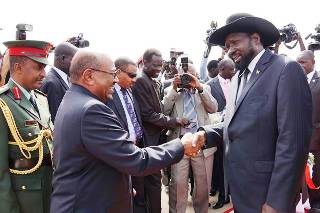 The two leaders, at a press conference held in Juba after their meeting, said they both agreed to form a joint high level committee to work out modalities seeking to resolve the remaining outstanding issues between them.

Bashir, making a first time visit to the South Sudan capital since it got its independence in July 2011, said he ordered for resumption of Sudan’s border with its southern neighbour and pledged stronger ties with the latter.

Ban Ki-moon, the UN Secretary-General, in a statement, said he was encouraged by the constructive discussion between the two leaders on the implementation of the agreements they signed in Addis Ababa on 27 September 2012.

He however, urged both Kiir and his Sudanese counterpart to “maintain this positive momentum.”

The South Sudanese president and his visiting Sudan counterpart ended their talks on Friday without striking a deal on the issue of the contested Abyei region.

Bashir, however, vowed to work hand to hand with Kiir to resolve the outstanding issues including Abyei where they are yet to establish temporary institutions and set up a referendum commission.

“The Secretary-General commends both Presidents for their decision to continue their efforts to resolve the Abyei issue in accordance with the implementation matrix,” the statement reads in part, further urged the two leaders to resolve their differences regarding the final settlement of the disputed region.

In a related development, Chairperson of the African Union, Nkosazana Dlamini-Zuma, congratulated both Bashir and Kiir for their fruitful summit meeting in Juba.

The meeting, she stressed, was a further “demonstration of their commitment to foster the normalization of relations between the two countries and promote the wellbeing of their peoples.

Zuma, in a statement, particularly commended the two Presidents for upholding the letter and spirit of the Cooperation Agreement of 27 September 2012, and for reiterating their commitment towards the full implementation of all its nine components.

“In this respect, she notes with satisfaction their decision to direct all joint mechanisms and committees to accelerate their efforts, in order to enhance the relations between the two countries in all fields of cooperation,” the statement says.

She however welcomed the commitment of the two presidents to resolve the issue of Abyei, in accordance with the Implementation Matrix, as well as their decision to establish a High Ministerial Joint Committee to be chaired by the two vice Presidents of both countries, in order to facilitate speedy decision-making regarding the enhancement of relations between the two countries.

The AU, she stressed, will continue to support the two countries in the implementation of the agreements they have signed and towards the achievement of the overall objective of two viable States mutually supportive and at peace with one another.

The two leaders, according to South Sudan Information minister, agreed to set up a joint administration in Abyei, but failed to agree on how the local legislative council should be composed.

“President Salva stressed on the need to respect previous arrangement. He wants the 60% representation and 40% representation for the government of Sudan. This was how it used to be but president Bashir said it is better to use 50-50 representation”, Barnaba Marial said

He further said the two presidents convened to continue their discussions on the issue and pointed out that Bashir had asked Kiir to visit Khartoum for further engagement on issues which remained unresolved.

“They will continue dialogue. You know nothing gets finished at once. There are issues which need consultations and explanation for better understanding”, the minister said.

Khartoum says it had previously accepted the 40% share because it wanted to encourage Southerners to vote for unity. But now as things are different it wants to re-establish the share of 50% as it is provided in 2005 peace agreement