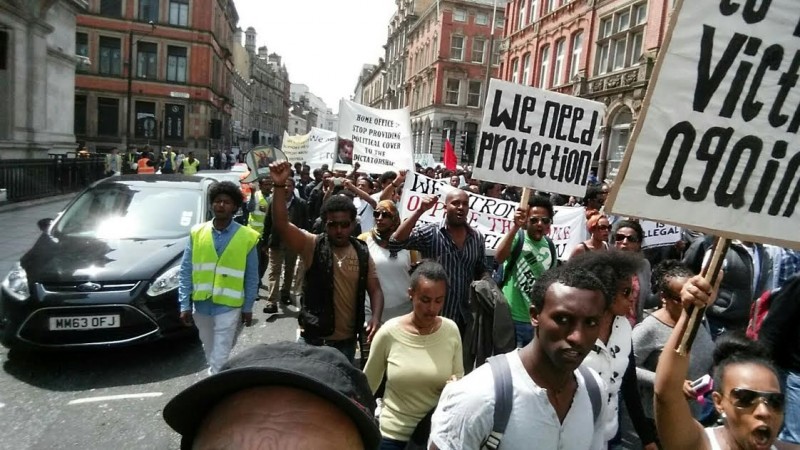 London, July 2, 2015) – The United Kingdom’s Home Office should issue new guidance to staff screening Eritrean refugee claims that reflects the continued real risk of persecution and other abuses there, Human Rights Watch said today in a letter to the Independent Chief Inspector of Borders and Immigration.

Three key changes to recent Home Office asylum guidance on Eritrean asylum claims are based exclusively on a flawed Danish report that suggests there have been improvements in the human rights situation in Eritrea and on statements by Eritrean government officials. But the most up-to-date evidence, including a June 2015 UN Commission of Inquiry reportand recent Human Rights Watch interviews with Eritreans who have fled the country, indicates that long-standing abuses continue.

“The reliance on a weak and discredited report suggests the Home Office is more interested in keeping asylum seekers out than in protecting people in danger,” said Gerry Simpson, senior refugee researcher at Human Rights Watch. “Instead of relying on Eritrean government ‘plans’ to end decades of human rights abuse, the UK should draw on current independent evidence of repression to assess Eritreans’ refugee claims.”

The UK’s new guidance could lead decision-makers to erroneously dismiss Eritreans’ genuine protection claims stemming from draft evasion and desertion, the harsh conditions of prolonged national service, or from punishment for leaving Eritrea without permission.

Deporting such people would amount to refoulement, the forced return of a person to a place where they would face a real risk of persecution or other serious harm, Human Rights Watch said.

The vast majority of those lodging asylum claims in 2014 did so in Germany, Sweden, and Switzerland, with much lower numbers in the Netherlands, Norway, Denmark, Malta, and the UK, where 3,280 people registered claims. A chief immigration adviser at the Danish Immigration Service who co-authored the Danish report has said that the report was hastily produced in response to the increasing numbers of Eritreans lodging claims in Denmark in 2014. By the end of the year, 2,275 had registered in Denmark.

Eritrea was one of eight African countries that met with EU member states in November 2014 as part of the EU-Horn of Africa Migration Route Initiative, also known as the Khartoum Process. Its stated aim is to stop trafficking and smuggling of migrants from the Horn of Africa to Europe. The change in the UK policy probably stemmed from this effort along with the increasing number of Eritreans arriving in the UK, Human Rights Watch said.

Between January 1 and the end of March 2015, record numbers of Eritreans – 3,552 – lodged asylum claims in the UK, according to the Home Office.

In March, the Home Office published two reports on Eritrea announcing key changes in guidance for reviewing Eritrean asylum claims. The reports say that the Eritrean authorities no longer view draft evaders or deserters as traitors or political opponents, that they and others leaving Eritrea without permission no longer automatically risk persecution or other harm on return, and that not all military service conscripts face abuse.

The changes are based almost exclusively on the discredited December 2014 Danish Immigration Service report, which suggests that the Eritrean government may be carrying out reforms that would allow Eritrean asylum seekers fleeing Eritrea’s abusive, indefinite national conscription program to be safely returned to the country.

However, the conclusions in the Danish report are based mostly on interviews with members of the diplomatic community in Asmara who have limited ability to speak freely to people in Eritrea and who qualified their statements, including by saying that the fate of people returned to Eritrea is unclear, and that government reforms of the national service conscription are rumoured, but not confirmed. No independent human rights investigators – including members of the UN Commission of Inquiry – have been able to investigate the situation in Eritrea.

Western diplomats have also openly told visiting Norwegian immigration experts that what they can say about human rights conditions in Eritrea amounts to little more than “views and … speculation.”

The UK report also says Eritrean government officials’ claim they plan to limit national service to 18 months. The authorities had made similar announcements previously, but there is no evidence they have made these changes on the ground.

In December, the UN refugee agency criticized the Danish report on a number of grounds, including that interviewees’ information had “often been used selectively in the report.”

These and other concerns undermine the Danish report’s two key conclusions, Human Rights Watch said. The report says that anyone leaving Eritrea illegally, including draft evaders, can safely return if they pay a 2 percent diaspora tax and sign a letter of apology at any Eritrean Embassy worldwide for having left the country illegally, and that draft evaders and deserters are no longer considered by the Eritrean regime to be traitors or political opponents.

On June 29, the UK’s Independent Advisory Group on Country Information (IAGCI) – which makes recommendations to the UK’s Independent Chief Inspector of Borders and Immigration about the content of material produced by the Home Office’s Country of Origin Information Service – published its criticism of the Home Office reports, which it said were “marred by serious methodological concerns.”

Human Rights Watch said that evidence from other sources, including the June 5, 2015, UN Commission of Inquiry report on Eritrea and recent Human Rights Watch interviews with Eritreans who left the country in 2014 and 2015, indicates there has been no change in the pattern of serious abuses in Eritrea.

“Until there is clear evidence, substantiated by international human rights investigators, that Eritrea has ended its abuse of national conscripts, the UK and other countries should base their policies on the best available independent evidence,” Simpson said. “That includes the words of Eritreans brave enough to speak out over Eritrea’s ongoing human rights crisis.”