U.S. defends visit by Sudanese officials for talks in Washington

February 5, 2015 (KHARTOUM) – The United States acknowledged on Thursday the visit by two Sudanese officials to Washington which drew criticism from activists and some congressmen.   Sudan’s foreign minister Ali Karti who arrived in a 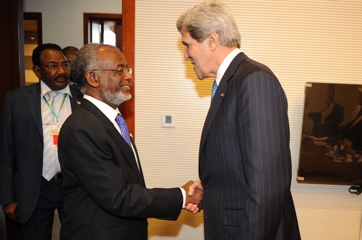 February 5, 2015 (KHARTOUM) – The United States acknowledged on Thursday the visit by two Sudanese officials to Washington which drew criticism from activists and some congressmen.
Sudan’s foreign minister Ali Karti who arrived in a low-profile attended the annual National Prayer Breakfast which took place Thursday with the presence of US president Barack Obama and other faith and political leaders.
The event is hosted by members of the United States Congress and is organised on their behalf by The Fellowship Foundation, a Christ-centered group.
The State Department told rights activists who protested against the visit that Karti was invited by the organisers of the event in appreciation for his decisive role in the release and departure from Sudan of Merriam Ibrahim who was spared the death penalty after her conviction for apostasy in July last year.
Regarding the presidential aide Ibrahim Ghandour who is expected to arrive in Washington , the State Department informed the activists, he is invited to deliver him “officially and directly” the position of the American administration on a number important issues related to the bilateral relations.
State department spokesperson Marie Harf told reporters Thursday that Karti and Ghandour will hold discussions with US officials next week.
“We can confirm the official visit of senior Sudanese Government official Ibrahim Ghandour. Next week, he’ll meet with senior U.S. Government officials,” Harf said.
“This visit and also the discussions with Foreign Minister Karti are a continuation of dialogue on a number of issues of longstanding concern to the U.S. Government, with the Government of Sudan. It’s part of the engagement process where we raise concerns, certainly, that you are well aware of. And we engage them in a frank and frequent manner to discuss this full range of issues,” she added.
US Congressmen Jim McGovern and Tom Lantos, co-chairs of Lantos Human Rights Commission, issued a statement criticising the invitations extended to the two officials.
“We are deeply alarmed by reports that two alleged perpetrators of genocide in Sudan, Sudanese Foreign Minister Ali Ahmed Karti and Dr. Ibrahim Ghandour of the ruling National Congress Party, have been invited to the National Prayer Breakfast. Quite simply, these officials should not have been invited to attend an event held in the name of the U.S. Congress, which has passed legislation denouncing the Sudanese government for acts of genocide and crimes against humanity” the statement says.
“This breakfast, an occasion where the 100th Anniversary of the Armenian Genocide will be recognised, should be a moment to ensure that the words ’Never Again!’ have genuine meaning. We call upon all participants at the National Prayer Breakfast, including the President of the United States, to publicly and forcefully denounce the continuing human rights crimes being carried out in Sudan by the government of Omar al-Bashir, especially the atrocities taking place on a near daily basis in Darfur, Blue Nile and South Kordofan”.
The Sudan People Liberation Movement North (SPLM-N) Secretary-General and chief negotiator Yasir Arman denounced the visit of the two officials saying they are invited to visit the US at the time they and their government are committing gross human rights violations and genocide.
“Ghandour is one of the architects of the one party election. We should mobilise against this visit,” he stressed.
Ghandour, who is the chief negotiator for talks with rebels on the conflict in South Kordofan and Blue Nile, will seek to persuade Washington to support their efforts to convince the rebel groups to sign cessation of hostilities agreement and to join the national dialogue launched last year by president Bashir.
Sudan is on the list of terror sponsoring countries and subjected to harsh economic sanctions. Washington admits Sudan’s cooperation in the fight against terrorism, but attached new conditions to normalizing ties related to the end of the conflicts in Darfur, Blue Nile and South Kordofan.
Sudanese officials however, insist that issues of bilateral relations should be discussed without interfering in Sudan internal affairs.
The US special envoy to the Sudans Donald Booth visited Khartoum twice since his appointment in 2013 where he received a cold reception from Sudanese officials. Since, Khartoum reportedly refuses to receive him.
(ST)