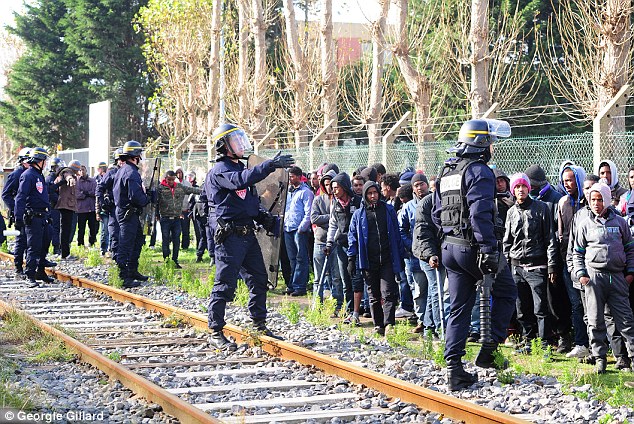 A Polish lorry driver was being interviewed by French police today after two UK-bound migrants burned to death in the back of his lorry.

They are the latest in a growing list of would-be asylum seekers to die as they try to get across the Channel.

The horrific tragedy took place outside a ferry terminal near Dunkirk on Wednesday evening.

There was ‘an explosion in the trailer’ as the HGV travelling from Poland to Britain went through customs at the Loon-Plage port.

‘An emergency call was made soon after 7pm,’ said a local police spokesman. ‘By the time firefighters reached the scene, the tarpaulin cover of the lorry trailer was alight.

‘The driver of the lorry, who is Polish, is being interviewed.’

The charred remains of the migrants, who have not been identified, suggested that they had been trying to escape following an explosion.

Dunkirk prosecutor Eric Fouard confirmed that the men were ‘carbonised’ in the blaze, with an initial enquiry pointing towards ‘an accident’.

After visiting the scene, Mr Fouard said the truck, which was carrying foam insulating material, was practically destroyed.

One theory is that a stray cigarette may have caused the fire, and forensic experts are carrying out tests on the remains.

The incident highlights the massive dangers migrants face as they try to get to the UK in the back of lorries.

Around 2,500 are currently massing around Calais alone, with many more in other Channel ports such as Dunkirk and Cherbourg. Last month a teenage girl hoping for a new life in Britain was killed as she ran across a motorway in Calais.

The 16-year-old Ethiopian, who would have travelled some 4000 miles to get to northern France, was hit by a car on the massively busy A16 – a road always full of UK-bound trucks

Border guards regularly report hundreds of migrants hiding in shrubs along roads leading into the port, with many attempting to jump on lorries as they slow down.

A Sudanese migrant was killed in June after trying to conceal himself under the axle of a British coach in a supermarket car park.

And four migrants died in one week alone in March this year. On March 9 an Albanian man was killed on a motorway outside the town. Three days later, Ethiopian Mesfin Germa was hit by a lorry as he walked to the port.

The body of a 25-year-old Ethiopian man, Senay Berthay, was found in Calais’s Batellerie dock on March 14 and the next day a fellow Ethiopian in his 20s was crushed to death by a car while hiding on a vehicle transporter.

It is thought he had been among a group of three men who got on the truck and then realised it was going in the wrong direction.

Calais Mayor Natacha Bouchart has long argued that Britain’s ‘generous welfare system’ is the real cause of the migrant crisis in her town.

She told a House of Commons committee last month that migrants were ‘prepared to die’ to get their hands on UK benefits.

The mainly Eritreans, Sudanese and Afghans in ports like Dunkirk Calais squat in disused buildings in Calais, or live in temporary camps – ones which the French regularly raze.

Fights between rival groups have become common place, as well as disturbances involving people smugglers who charge the equivalent of around £1000 for a passage across the Channel in a lorry or car.