Turkey car bomb and gun attack near courthouse in Izmir

Two attackers, a policeman and a court worker have been killed in a car bomb and gun assault on a courthouse in the Turkish city of Izmir, state media say. A number of people were wounded 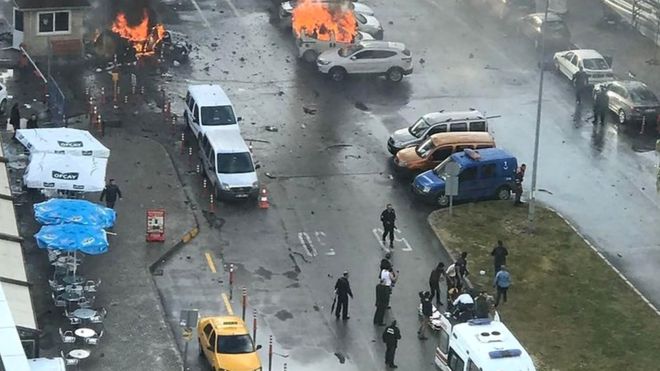 Two attackers, a policeman and a court worker have been killed in a car bomb and gun assault on a courthouse in the Turkish city of Izmir, state media say.

A number of people were wounded in the explosion, some critically.

Images showed two cars ablaze and the body of one man carrying a weapon. Reports say a third attacker is being sought.

It is not clear who is responsible but Turkish officials say initial findings point to Kurdish rebels.

Some of Turkey’s big cities have been targeted recently both by so-called Islamic State (IS) and by Kurdish militants.

Turkey launched a military operation in Syria in August to push back IS and Kurdish forces from the Turkish border.

IS had said it was behind last weekend’s Istanbul nightclub attack that left 39 people dead.

Izmir’s Governor Erol Ayyildiz said a car had stopped in front of the Izmir courthouse, sparking an exchange with police, after which the car bomb detonated.

The attackers were armed with Kalashnikov rifles and grenades.

Reports of the number of people injured in the explosion ranged from five to 10.

A second car was destroyed in a controlled explosion, the governor said.

Deputy Prime Minister Veysi Kaynak said that, judging by the weapons found following the raid, a much larger attack was being planned.

No-one has yet said they carried out the attack but the governor said initial findings pointed to the involvement of Kurdish fighters from the outlawed Kurdistan Workers’ Party (PKK).

The PKK is fighting for an independent Kurdish state within Turkey.

It has carried out many attacks on Turkish security forces, particularly in the south-east.

In August a PKK car bomb in Cizre killed 11 policemen and injured 78. Another 10 soldiers and eight civilians died in a car bomb attack on a checkpoint in Durak in October.

In claiming the Istanbul nightclub attack, IS blamed Turkey’s military involvement in the Syrian civil war.

At least 36 people are now in custody in connection with the attack, including many in Izmir, although the main suspect remains at large.

A number of those arrested in Izmir are from the Uighur ethnic group. They are believed to have come from China’s Xinjiang region and have ties to the nightclub attacker, the state-run Anadolu news agency says.

Mr Kaynak said they were closing in on the gunman, saying he was possibly an ethnic Uighur.