The Upcoming NYC Demo: Empowering the Youth with Technology to make a leadership Difference

The Upcoming NYC Demo: Empowering the Youth with Technology to make a leadership Difference Nowadays, the combination of youth and technology, as change agents, make social and political impacts.  The youth with technology were seen during 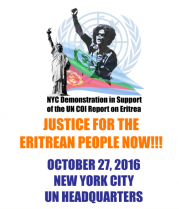 The Upcoming NYC Demo: Empowering the Youth with Technology

to make a leadership Difference

Nowadays, the combination of youth and technology, as change agents, make social and political impacts.  The youth with technology were seen during the Arab Spring revolutions to raise public awareness and motivate the people into peaceful and organized-collective actions as well as disseminate plans and decisions of the minute and the day to guide the participants to the right place of the rally to show support for the cause.

The Eritrean youth believe in action.  Their believe in action makes them effective leaders that can create a conducive space for all of the Eritrean opposition members to interact and send strong messages of the demonstration far and wide with rippling effects.  It is believed, if the demonstrators can shake the streets of New York City with their voices, so also the youth can shake the world with the same voices reaching every corner of the world with their advanced technologies.  And, for sure, the youth’s technologies are threats to the thugs of the tyrant, warning them – “you dare disrupt our demonstrations, your pictures will readily be disseminated to the world by our cameras and technologies.”

The Eritrean youth are ready to take more initiatives to prove their effectiveness in the use of technology as a tool of directing and guiding demonstrators in the upcoming demonstration, in New York City, in support of the UN COI Report on Eritrea.  They have to prove that they can effectively plan and guide such demonstrations with the help of technology.  Yes, they have to prove that they can use technology to bring changes in the way demonstrations are conducted without disrupting businesses and traffic of the city.  In case of any threat from the thugs of the regime supporters, the youth with their technology will ensure the safety and peacefulness of the demonstrators.

The message of the demonstration must be directed at 10 percent to Eritreans and 90 percent to non-Eritreans.  The message must be clear and in a clear language.  The demonstration’s plan should focus on ensuring that what is being read and said is clearly understood by the non-Eritreans.  Thus, the youth, here too, can be effective in communicating the right message in the right words and language clearly (with no accent).

Like any peaceful rally, voices must be raised to send the message.  But out there, it may be anticipated, that the thugs of the tyrant may come to raise their fists to stop the message.  Such anti-peaceful rally problems cannot be prevented from happening without a strategy to confront, control and contain the potential problem before it becomes a real threat to the demonstrators.  The strategy should include avoidance management that enables to handle troublemaking thugs that are sent by the tyrant’s representatives.  The thugs should not be ignored in the event they appear to be posing threats to the demonstration and demonstrators.

By giving the youth the language leadership, the youth’s technologies can be used effectively to achieve quality demonstration that will continue to echo the voices of the voiceless endlessly.  Since written materials are crucial to communicating messages, measurements must also be taken to ensure that written materials (leaflets and pamphlets) are ready to be passed out by assigned demonstrators to bystanders and passersby.  Similarly, at the conclusion of the demonstration, feedback and questionnaires to evaluate the demonstration may be handed out to the participants or demonstrators.

Entrusting today’s Generation with Delivering on the Unfulfilled Promise

The new generation lost hope because the Eritrean Revolution’s promises were broken.  But once the promises are well understood, the youth will be committed to reinforcing each word of the promises back into power.  Since the new generation, as active revolutionary force, can reinforce the lost promises and guarantee bright days ahead in Eritrea, it is expected that the old generation should begin considering the youth for posts where they have skills in order for them to help the opposition become more effective.

The new generation or youths have advanced skills in social media and group organization.  Any function associated with group organization and social networking is best for the youth and they can help the opposition function better in sectors where instantaneous communications and actions are vital.  Using the social networking, the youth can strengthen the social relations among the youth including connecting the youth inside Eritrea with the outside world.  Since the youth are specialized in social media, they can be entrusted with disseminating political issues for wider discussion by the public.  Thus, the youth can effectively participate in mass political organization recruiting new members and in areas of information services.

In each political party, the department for mass political organization has the responsibility for maintaining and motivating the existing members as well as recruiting new members.  Depending on the status of the youth, as part or full-timers, and who are reinforced by fresh willingness to contribute, the youth can engage the silent majority politically better and deeper to awaken them and break their silence.  After all, the fact that change is overdue in Eritrea is a widely accepted truth by the Eritrean Diaspora and those politically conscious people inside Eritrea.  The action needed is, therefore, to convince the silent majority to openly stand on the side of the victims of the tyrant or the Eritrean people.  Thus, the silent majority’s inaction or silence is not only due to the fact that they feel politically unsafe but because of lack of convincing political connections, which the youth are good at.

Most political activities believe that the Eritrean oppositions’ ineffectiveness can get straightened out with the effective participation of the youth.  Since the youth constitutes the biggest threat to the regime in Eritrea, the Eritrean youth should be allowed to master their fight against the regime.  With the guidance of those in the opposition leadership, the youth can make better decision in their fight against the tyranny in Eritrea, benefiting the people and preparing the silent majority to become effective majority politically.

Every day the policies and political questions of the day for Eritreans include conflicts between proponents of constitutionalism and absolutism.  The pro-absolutism praise the regime for being able to provide peace and order in Eritrea at the time when the neighboring constitutionalist governments failed to do so.  What the pro-constitutionalism hate is that the neo-principle of “divine rights of kings” claiming the tyrant Isayas is to be considered as untouchable despite the king’s (the tyrant’s) incompetence, mismanagement and corruption.  Indeed, if a leader cannot promote freedom, he must be for slavery.  If a leader rules through empowering guns and criminals, he must be for injustice and inequality.  And, if a leader never knows how to build bridges between the needs of the country and needs of the people, he must cease to be a self-elected leader and lay a foundation for elected leadership.

The other everyday political question is about the tyrant’s total control over the country’s economy under the pretext of the best way to achieve a quick economic self-sufficiency for Eritrea.  However, the tyrant’s 25 years evidences tell different stories that the country has had the quickest economic devastation ever, which was brought about by the self-sufficiency program.  Because the program was made to constrain economic opportunities, it has failed to address the needs of the people and the country.  As the result, the old and the new Eritrean capitalists were compelled to leave the country.

Thus, the regime’s failure to rebuild the Eritrean people along with rebuilding the nation in order to create jobs and retain the new generation led to making everything obsolete in Eritrea as well as stalling out the economy of the country despite the booming mining industry.  With the departing or fleeing youth becoming more adventurous to reach their dream-destinations, the tyrant’s generals have become more involved in smuggling and trafficking lucrative businesses.  In so confronting, the tyrant’s generals are playing the predator’s game trapping the fleeing youth wherever they are to devour them bite by bite to the end.  Unless the predators are turned into victims by exterminating their cruel nature and taming them, the fleeing youth will not be at peace wherever they go and wherever they are.

The Eritrean youth know well who (and why the tyrant’s generals) are interested in them for their kidneys and who (and why the Eritrean opposition groups) are interested in them for their skills.  The Eritrean youth, as millennial generation that excel in social-media, can easily take their grievances to streets and social media, participate in exploring means of fighting tyranny, negotiate as well as obtain support from the international peace-loving forces.  What the new generation needs is to learn from the old generation all the strategies include the ABCDs of political organizations and their structures as well as how to identify and fight the political lies of the tyrant.  In the process, the new generation has to gain and build the needed political knowledge, acquire the true Eritrean perspective of the Eritrean revolution including political tolerance, political engagement and how to spark dialogue with other political forces.

Many of those youth in the Diaspora, who fled the regime, still have fresh circling memories in their subconscious of their experiences including all shocking harassments, abuses, and rapes as well as the list of names of those innocents who perished at the hands of the tyrant’s security apparatus members and those kidnapped or disappeared.  The youth who fled the regime are considered eye witnesses that the tyrant is so brutal to his own people.  It will be politically wise of the opposition to invite these youth to play central roles in devising retaliatory strategies and giving hand to the leaders who are leading the fight to free the oppressed people in Eritrea.

The regime enablers fear bitter revenge from those abused at their hands.  The youth suffered and is suffering extremely under the tyrannical regime.  The indignant and angry youth once well positioned can effectively erase or neutralize the fear and terror imposed on the Eritrean people in Eritrea.  If the abused youth at the hands of the tyrannical regime have to have a direct impact on the ongoing fight against tyranny, they have to become involved in key political activities and key leadership roles.