Ezana Sehay 02/10/17 It is conventional wisdom that politicians are more likely than the general population to be susceptible to sociopathic traits. Such politicians tend to be selfish, callous, remorseless, users of others, irresponsible, glib, con 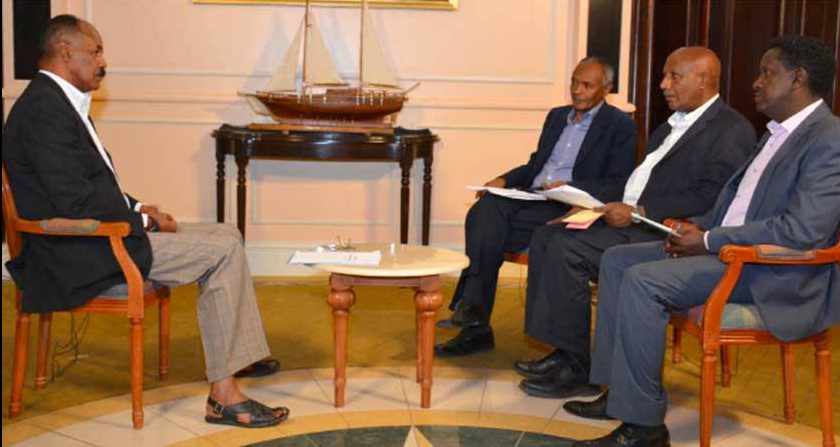 It is conventional wisdom that politicians are more likely than the general population to be susceptible to sociopathic traits. Such politicians tend to be selfish, callous, remorseless, users of others, irresponsible, glib, con artists, and of course pathological liars. Furthermore, they have high sense of self-worth, are chronically unstable, and poses unrealistic goals.

Brimming with seemingly easy charm and boasting calculating mind, a psychopath politician promotes populist agendas.  But should something go wrong, like the criminal psychopath, exhibit failure to accept responsibility for his/her actions. Such a leader eventually creates pathocracy – a totalitarian system bent on power, control, and deprivation of basic human rights.

I don’t think I need to hit you over the head too hard with the point here, do I?  The world has come to know Isayas Afeworki, the Eritrean president, as a petulant, vindictive, and pathologically narcissistic demagogue.

So, when the Eritrean state media announced he [Isayas] is going to give an “interview” initially I shrugged it off.  The problem with Isayas’s interview – – it is monotonous. But against my intuition [hopping he might say something new and relevant] I proceeded to watch the “interview”. Boy! Was I wrong. As I watch him unwind his thousands-word toxic screed on national TV, almost felt sorry for the man – the once astute statesman is now reduced to self-parody. What could be sadder than a man in his 70s mumble incoherently for hours. Listening to him; would annoy you, make you sad – to keep listening you need to have semantic anesthesia.

The first part dealt with internal issues, particularly the economy. Isayas’s assessment of the economy is as gloomy as ever, he admitted that there is not a single sector of the economy that is functioning.  Yes, it is that bad, so bad, even Isayas couldn’t pretend otherwise. But none of it is his fault, apparently. Per him the blame falls on the usual external suspects. Further, displaying his customary show of contempt for the Eritrean people, he didn’t bother to forward a remedy for the ailing economy. He just told the people to suck-it up.

The Eritrean people are being asked to sacrifice even more precisely when the pain of prevailing socio-economic situation is becoming unbearable – there is precious little left to squeeze out of the ordinary Eritrean, either by bankrupt economy or bankrupt state.

In his second part of the interview [by far his favorite] he dealt with politics – not local of course.  Isayas the habitual scrambler of chronology; started mumbling about irrelevant [geopolitics] gibberish and then steered to his usual cheap chicanery argument of “we are surrounded by enemies”.  Having lost the most pointless game of political chicken; you would expect a grand sense of reflection and change of approach, not Isayas.

A typical dictator that he is, Isayas is a man of many plots. He is a plotter who is for ever plotted against, at least in his own mind. As he sat there in his Masawa palace, controlling his hermit kingdom with lies and suppression, he has grown convinced that his enemies are scheming against him. He assumes they are like him.

Throughout the two-part interview there have been so many lies, contradictions and distorting claims made by Isayas, that by the end of the interview, I couldn’t tell whether his claims are laughable, annoying or both.

Much of Isayas’s misleading and irresponsible rhetoric may be nonsense, but there is no denying the real damage such nonsense can do to everyone listening. As nonsense is a disruption of reason or meaning, it necessarily shatters our most fundamental beliefs, which is what makes it so captivating, and so dangerous. Hearing Isayas’s brand of nonsense in the context of national affairs may fall short of apocalyptic, but it does feel truly dystopian.

By any socio-economic metrics, Eritrea has become a failed state. But that is not a concern, not a bit for Isayas, so long he thinks his power is safe. Isayas’s willingness to prioritise power above all else; including the welfare of the Eritrean people who have sacrificed a lot for almost a quarter of a century, his ruthlessness, and utter lack of social conscious is with no parallel.

He, if ever, no longer sees the Eritrean people with dignity and worth but as things to be manipulated, maneuvered, canned, in to believing he has their best interest – but kills, incarcerates if they dare step out of line – all the while refusing to own up to his failings, God knows how many.

The mounting failures and blander of Isayas and the government he leads has made Eritrea a one-legged stool. Check this out.  Isayas has been in power of government for 26 years, that is equal to a period of one generation. If we take the average African annual birth rate [the government haven’t conducted an official census] as a guide, the population of the country should’ve grown by almost two million.

Consider the following fact: according the UNHCR data, in the time between 2000-2015, almost 700,000 Eritreans youth have fled the country. This number doesn’t include the tens of thousands of undocumented ones. Those who remain inside the country are condemned to a perpetual slave labour camps. Put another way, thanks to Isayas the youth of post-independence Eritrea has become a disposable-generation. Consequently, concerned Eritreans are voicing their anxiety as this is leading to the “Palestine-ization” of Eritrea.

To recap: what ever hopes the Eritrean people may have had of Isayas salvaging a vestige of responsibility from the charred rubble of his rule: those are now gone.  Instead, the president retreated further in to his dogmatic cocoon. He turned in a braying, scowling, often in coherent rendition, which he capped, astonishingly, by declaring to strengthen his party [PFDJ] and restructuring the country’s admirative zones for the sheer purpose of control.

Put differently, the “interview” was a display of incompetence and ignorance to put all his previous forays to shame.  Isayas has proven to be a consummate aloof. When it comes to politics and statesmanship, it’s accurate to say he has no idea what he’s talking about. What’s more: He expresses no desire to learn. Instead he spins his ignorance as a virtue all the while distorting the facts.