The Story of Dr. Petros Habtemikael – On the 43rd Anniversary of his brutal Execution by the Dergue Regime

During the period of the Dergue (1974-91) there were a number of egregious abuses against academic freedom at Asmara University. An early incident was the killing of Dr. Petros Habtemikael, an economist, in 1975. Dr. 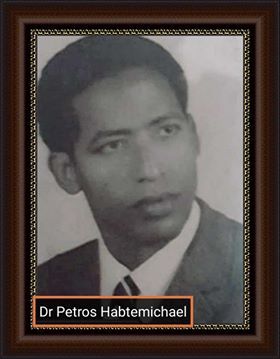 During the period of the Dergue (1974-91) there were a number of egregious abuses against academic freedom at Asmara University. An early incident was the killing of Dr. Petros Habtemikael, an economist, in 1975. Dr. Petros taught extension courses in the evening, and some of his students were Ethiopian military officers, who objected to his use of Eritrean rather than Ethiopian examples in his coursework, and to the low grades they were given. It is believed that the officers caused Dr. Petros to be detained and executed.

Source Freedom of Expression and Ethnic Discrimination in the Educational System: Past and Future

Excrept from Long way from Adi Ghehad a biography of Dr Teame Mebrahtu, Chapter 20 University and the Death of a Friend Dr Petros was an old friend of Teame’s whom he had first met at the student conference in Bologna during his time at Beriut in 1964.

Petros had joined Teame in distributing propaganda protesting at the annexation of Eritrea by Ethiopia whilst attending the conference of student leders in Bologna in Italy. At that time Dr Petros represented Switzerland, while Teame was representing the Middle East.

Teama joined the University of Asmara in late 1974, the particular problem that Teame encountered soon after he joined the University was the decision by the Dergue to implement a policy of sending students out into the village to work on the land with farmers harvesting and maintaining crops. It was not popular with the Asmara University students-99% of them Eritrean who already opposed to the Mengistu regime.

Teama found himself pulled into the controversial new policy when the President of the University, Dr Assefa Tekle, a former head of the Pasteur Institute in Addis Ababa, received a letter from the regime ordering him to implement the new policy.

Dr Tekle asked Teama and another Professor, Dr Petros Habtemichael, to take on the responsibility of telling the students what was asked of them and to report back to him.

Teama was not not comfortable with the idea, But he and Dr Petros had no option but to comply with the request from the University President.

Teame had taught an Ethiopian military officer in one of his classes and had no problems with him. But Dr Petros, who taught him in his economics class, got into constant arguments with him—particularly when he expounded his view that Eritrea could be self-sufficient economically. The country had, he said, copper and gold as well as petroleum in the Red Sea. He was giving an honest opinion (which history has since proved to have some substance). But it was dangerous politically. It went against the Ethiopian view that Eritrea could not survive on its own and needed Ethiopian support.

The Ethiopian officer would angrily confront Dr. Petros. They would have fierce arguments with Dr Petros challenging the Ethiopian propaganda of the time which also claimed that Eritrea got its cereals from Ethiopia. Dr Petros put forward the view that, with the right resources and support, Eritrea could be the bread basket of East Africa.

But whatever the rights and wrongs of the argument, Teame was worried that his friend was being a little too honest in putting forward his viewa so forcefully at a time when the Dergue did not react well towards critics of the regime. He understood that he was thinking of his Eritrean students when he sopke out. But he feared Petros was being politically naive. He seemed unwilling to keep his view to himself and was determined to keep to principles of human rights and freedom of speech. His principles would have been easier to uphold in Western Universities where Petros once taught, but were dangerous notions in Mengistu’ns Ethiopia.

The hunt by the army for the student leaders continued. The university staff were asked to produce those on the list. But they said they had no idea where they were. The soldiers did eventually find some of the students they were looking for although many of them had just disappeared. They also rounded up students who had remained on the campus. The village scheme eventually fizzled out, with the government, although not actually cancelling it, not forcing it through in Eritrea. It operate for a few more months in Ethiopia where the students there did not oppose it.

With the situation now calmer the university returned to something like normal. Teame and Petros along with other staff, including a brilliant Accountancy lecturer, Ato Woldetsion Kelati, went back to teaching their classes. Part of the regular routine, both at the university and in the civil service, was to breake from work at about 1.00 pm and go home for lunch returining at 3.00 pm.

Petros did not have a car. Teame had a small Volkswagen and would grop him off at his home for lunch e-route back to his house. He would pick him up again on the way back. Petros lived in a small flat in an apartment bolck above shops. He had wife and small child with another one on the way. Teame and Teblez had been instrumental inpersuading him to get married and organised the wedding with the support of the relatives of both the groom and the bride. One of these on the bride’s side was Memher Hailemichael Ghebreysus, the man who taught Teame at Dekemhare Elmentary School and who played a great part in shaping his future role as an educator.

One day Teame arrived back from lunch to pick Petros up at his house.He rang the bell and Petros’s wife appeared at the window upstairs to tell him that Petros had aleardy gone. He had left the flat to wait outside for Teame whilst enjouing a somke- a habit Teame had been trying to make him give up.

Apparently another car, also a Volkswagen had drawn up and driven off with Petros. His wife thought it was Teame picking him up as usual. Now worried about his friend, Teame retuned to the university to discover that Petros was not there. He sometimes walked back from lunch. Teame reported his disappearance to the university authorities. With no sign of him after several hours that alarm was raised and the police were called in.

The police found two witnesses who said they had seen Petros being picked up by the occupants of a Volkswagen. He had been heard to say ‘Who are you?’ He was then pulled into the car which drove off. It had all the signs of a kidnapping by the Mengistu death squads who opearated in the city and often lefy bodies of their victims in the gutters in the early hours of the morning. Teame felt that kidnappers must have been watching Petros and noticed his habit of waiting outside the apartment block near Cinema Roma to be picked up.

Search parties were organised to look for him. Relatives and friends took part. Teame joined one which went to a large park on the road to Massawa. To their horror, although not completely to their surprise, they found Petros’s body. It had the tell-tale marks around the neck which showed he had been killed by strangulation with oiano wire, a trade mark of the death squade.

When the police investigators arrived they discovered that he still had his expensive watch and a large sum of money which would have been the bulk of his wages that were, at that time, paid in cash and would have been collected a few days earlier. Clearly it had not been a robbery. His outspokenness had caught up with him.

News of the murder quickly spread around the city. Dr Petros was very well known in Asmara. The student population knew him as a prominent nationalist. His death was greeted with shock and anger. Rumours started that the Ethiopian air force officer he had argued with in his class might have had something to do with his death.