The life of a state journalist in Eritrea – The Independent

Journalist Abraham T. Zere has been identified as a 'security threat', and watched his colleagues go to prison. Now exiled in the USA, he reveals the dangers facing writers in the "world's most censored country". In 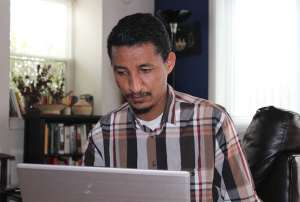 Journalist Abraham T. Zere has been identified as a ‘security threat’, and watched his colleagues go to prison. Now exiled in the USA, he reveals the dangers facing writers in the “world’s most censored country”.

In early 2016, journalists and staff members who held key positions in Eritrea’s ministry of information were required to fill out a detailed personal form, including information on their bank accounts, and where their family lived. The threat to those thinking of leaving the country was clear.

It has been more than 10 years since I stopped working for the ministry of information. In that period, it has evolved into a centre of terror, more militarised than ever and more overtly interfering in journalists’ lives.

In April, exiled journalist Bekeret Abraha gave an interview to Ethiopian radio station Radio Wegahta. Abraha, who has been jailed three times, confirmed that state journalists now had their performance measured mainly by the military, and many journalists have been imprisoned as a result. Since 2012, journalists have also been required to attend military drills and guard government offices. Eritrea currently ranks last (180th) in the Reporters Without Borders’ World Press Freedom Index. The Committee to Protect Journalists has called it the world’s “most censored country”.

I was young when independent newspapers still operated in Eritrea, before they were banned in 2001. I was an active contributor to one of them, Zemen, during my last year of secondary school.

If journalists stepped out of line, even slightly, they faced arrest and would only be allowed to resume their work after being “rehabilitated”. Information Minister Ali Abdu was also sending journalists to be jailed in army prisons, the most brutal in the country.

For a long time I played safe. I was getting along well with the editor-in-chief and was valued as a prolific journalist who was available in emergency situations. This was until the newspaper published a letter that attacked my column, saying it was undermining Eritrean society. Knowing the system, I realised it was a warning.

I was fairly certain the complaint had come from Information Minister Abdu. In my three years at Haddass-Ertra, I never had any personal contact with Abdu. I never approached him for a favour or approval, which was no doubt an unforgivable offence in his eyes. I was quite aware of his reputation for reading and approving all local news, and monitoring international news with an almost pathological fixation. I suspected he did not appreciate my articles. So the day after I read this letter, I handed my resignation letter to the editor-in-chief.

My requests for permission to leave the country and take up a scholarship at a US university were repeatedly denied. I finally used my contacts to get approval for a study trip to South Africa in 2012 and from there travelled to the USA, where I remain today.

This is an edited extract from an interview with Eritrean journalist Abraham T. Zere, for Index on Censorship magazine. To read the full piece click here.