The Israel Government have decided to deport Eritrean and Sudanese refugees to Rwanda: Time to peak up for those who can’t

By Petros Tesfagiorgis  African asylum seekers, mostly from Eritrea, take part in a protest against Israel’s deportation policy in front of the Israeli Knesset in Jerusalem, on January 26. (Photo Newsweek) These days are the darkest days 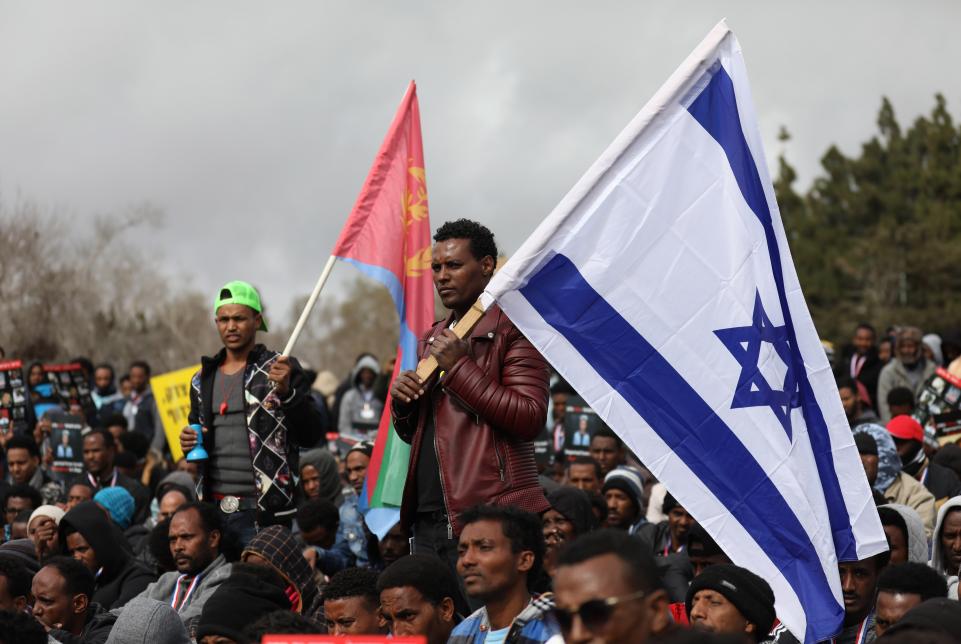 African asylum seekers, mostly from Eritrea, take part in a protest against Israel’s deportation policy in front of the Israeli Knesset in Jerusalem, on January 26. (Photo Newsweek)

These days are the darkest days not only for Eritrean and Sudanese refugees but also for the people of Israel and the justice loving people all over the world.   To deport 40,000 Eritreans and Sudanese by the Israeli Government is a racist decision.   This forceful deportation of Africans who have nowhere to go is shameful history of Israel against Africans and will go down into history books as such, like the history of holocaust. It is sad to see people who suffered a lot under Nazi atrocity to be cruel against other people because of the colour of their skin.

What is worse is that the Israeli Government has bribed an African nation, Rwanda, to accept the expelled refugees alleged to be in exchange of arms and military training and financial help.  This is slave trade by other means. And there are precedents that the few who left voluntarily to Rwanda are being damped in no man’s land in the border with Uganda with no document putting their life at risk. There were reports that some have died. These shows that the refugees are disposable and for the Israeli and Rwandan Government their life does not matter at all.  What a shame and humiliation for African governments. African Union should seize of the matter and rise up to the challenge presented to them by Netanyahu.

However, what is encouraging is that many Jew groups have started to denounce the dangerous decision and are working hard to reverse it.  I quote from Newsweek.

“Israel’s failure to follow the Jewish imperative to protect and care for the gerim—the landless sojourners who seek refuge among us—is a far greater threat to the Jewish character of the state than is the community of African migrants and asylum seekers who have escaped forced military service, torture and crimes against humanity in Eritrea and Sudan and sought safe haven in Israel,” Rabbi Michael Lezak, co-chairman of T’ruah, a human rights group, told Newsweek.

Ralca Gian, the secretary general of Israeli NGO   Zizim Community action, wrote a letter to Israeli civil aviation and pilots association to disobey the cruel and inhuman step of deporting refugees. That started to bear fruits as some pilots refused to fly refugees out of Israel.

Israel’s rabbi have started a movement that pledges to hide African refugees facing expulsion. Hundreds of Israel rabbis were inspired by the Sanctuary movement in the United States.

What is to be done by Eritreans in Diaspora: Many Eritreans are entertaining the idea of launching a demonstration outside the Israeli Embassy in London. The question is not what is to be done but how is it going to be done. There is a committee that organises events in UK. The committee has to invite many groups in the planning stage in order to be inclusive.  And it is in the initial stage that innovative ideas flow. Invite groups other than Eritrea for example – “African Lives matter.org” who are the main driving force in the successful demonstration against African slavery outside the Libyan Embassy.   There must be some division of work. Because it should not only be demonstrations.  In the UK there are many Jews institutions. They are influential and can be asked to appeal to the Israel Government to change their decisions. The organisation, Eritrea Focus Ltd (EF) works closely with APPG (All Party Parliament Groups for Eritrea) – and can   ask the APPG to raise the issue with the Israel’s Embassy or raise it in the Parliament. It can also prepare appeal letters to go to people who are concerned about the urgent situation.

It is possible to coordinate the work with other EU countries.  For example with the group in Holland. The group has succeeded in the cancellation of YPFDJ conference and their contribution in exposing the Eritrean Embassy activities to collect 2% tax by intimidation was substantial, and it gave rise to the expulsion of Eritrean Ambassador from Holland. Kubrom Dafla had clarified the two events in his interview with Assenna.com. If possible to coordinate with other countries such as USA, Canada and Australia is very important.

If some sort of coordination is achieved a task force can be formed – to follow what is going to happen to the refugees and find out if their safety is guaranteed. All the names of the deportee must be registered and in collaboration with UNHCR, IOM and other bodies appeal to Governments in Europe, Canada, Australia and USA to take their share of the expelled. The world must not see the demise of 40,000 people. The Netanyahu Government can be sued for selling African refugees. In order to hide the human trade, the contract with Rwanda is shrouded in secrecy. The case must be handled by lawyers.  All these needs to have a task force to follow it up after demonstrations. The world must learn about the Persecution of African Refugees in Israel.

As I was about to post this article news in WhatsApp popped up that says “there is an initiation to do a demonstration in Front of the Israeli Embassy next Saturday. Well done, It is a good beginning.