The Holy Bishop, Mekarios in Stockholm

Stockholm 22 December, 2013 ናይብጹዕኣቡነመቃርዮስ:ሓዋርያዊዑደትኣብስቶክሆልም The Holy Bishop, Mekarios in Stockholm This Sunday (December 22, 2013) Eritreans in Stockholm were blessed (blessed, in its true sense/meaning) by the presence of his Holiness Aba Mekarios, an Eritrean bishop and 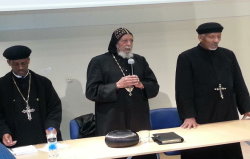 The Holy Bishop, Mekarios in Stockholm

This Sunday (December 22, 2013) Eritreans in Stockholm were blessed (blessed, in its true sense/meaning) by the presence of his Holiness Aba Mekarios, an Eritrean bishop and member of the Holy Synod of the Coptic Orthodox Church of Alexandria. As was previously announced in a number of media outlets, Aba Mekarios came to Sweden to give a much appreciated church service to the followers of Christianity especially during these times of Christmas as well as the much anticipated teachings concerning the social and political injustice in Eritrea. The mass was held in the orthodox church of Södertälje, south of Stockholm during the morning hours and later in the afternoon, our Holy Father were scheduled to meet Eritreans in Stockholm and around. This day I should add was special in the sense that: 1) Our holy father met us Eritreans and shared both their spiritual and political/human wisdom, 2) This Sunday happens to be the fourth advent, the last Sunday before Christmas, never mind that the actual orthodox Christmas is celebrated in some weeks from now, 3) Thousands of Swedes were not only shopping around for Christmas gifts but were demonstrating against the latest racial incidents in Sweden. The demonstration was prompted due to the latest incident (two weeks ago) at Kärtorp, southern suburb of Stockholm where hundreds of residents’ mainly Swedish families poured out to the streets to show their contempt to the neo-Nazi groupings in that area and were attacked by the same people they were objecting. Luckily, nobody was seriously heart in that incident but the neo-Nazis got the publicity they were craving for. This Sunday was therefore declared a day against the Nazis and the racist groupings and a demonstration was held in several cities in Sweden the biggest being here in Kärtorp, South of Stockholm where all political parties except “Sverige Demokraterna” (extreme right and racist represented in the Swedish parliament) were represented. This of course I’m telling not to alarm anybody but am trying to give you the general picture and political atmosphere here in Sweden, especially those of you across the Atlantic and the Middle East. Additionally, we have parliamentary election this coming year in Sweden where the outcome is not known as is usual. This naturally prompts a lot of activities from politicians representing all colors of the political spectrum except those mentioned above.

Back to the real event that concerns Eritreans these days, i.e. the meeting conducted by the Holy Bishop Abona Mekarios. The meeting was held at the Kista conference hall, northern suburb of Stockholm and a conservative estimate of the attendees was ca: 350. The hall was full of Eritreans who want to hear the wisdom of the great Father Bishop Mekarios not only on the secrets of the spiritual scripts but on how to dismantle the evil in Eritrea.

Personally, I was expecting an elderly man aged 82 and whatever you can imagine of an old man. Alas, I was wrong and ashamed of my prejudice as the saying goes “all that glitters is not gold” and in the same manner all who is of age is not old and fragile. Abona Mekarios was a man of exceptional stature and strength. After the introductory prayers everybody was seated but not the Holy Father. As you can see from the photo above and as you will see from the video footages of the Smerrr TV and TV Dimtsi Hizbi recorded by its tireless manager, Antonio Tesfai the Father is in a very good physical posture as if they were in their sixties or fifties.

The father spoke for ca: an hour and half, and the main message colored by their wittiness and fluency in several languages such as Arabic, French, Amharic, English and others captured the audience. When I was against colonialism, I was nationalist and patriot and now that I’m against tyranny I’m dubbed traitor from the dictatorial sections was their starting expression. But, my message all along has been that of respect and human dignity and the rule of law. My feelings emanate from my heart and anybody can read it on my face. We have fought for 30 years and we don’t need another 30 years of fighting for our rights, for detailed understanding of my activities I refer you to my speeches and teachings in Atlanta, USA and Israel recently. The tragic death of our children recently should be enough. We should understand that those children have families, mothers, fathers, brothers and sisters. The Holy Father referred to the Eritrean hero of the beginning of the last century, Abona Ra’esi Tessema who had warned against colonizers to no avail (zsemom AireKebun).  I should admit that this speech presented by the Holy Father was so special in the sense that it was full of witty proverbs accompanied not only in Tigrigna but also in Amharic, Arabic, French and English. Thus, the caliber of some Eritreans (who write in English) in the cyber world of Eritrea and whom I have noticed and have great respect and appreciation (without naming one) would be needed to reflect the appropriate interpretation of what was said.

For example, (Kun kemehagerke zebehal gega eyu) “respect or live the culture of your adoptive country” is silly and does not always make sense because it would mean if you were to find yourself in India, you would end up worshiping to the cattle. Yet in another witty saying, the Holy Father tells us that we should quit smoking and drinking “Shigara yitref, meste mewredi ember meHtsebi kiKewn yeblun” and that we are better off mastering the language spoken in our adoptive land.

All we asked for was and is that the nation be governed by the rule of law. Once the constitution and the rule of law are in place, we the Eritrean people are capable of managing our businesses be it political, social or economic. (ማሕለኻ ዘይብሉ ጸባ ድፉእ: ዳኛ ዘይብሉ ነገር ጥፉእ) We never expected them to feed us (ፍትፍት ከብልዑና ኣይተጸበናን) and we never said Mr. X should govern us. All we said and we are saying is for Eritrea to be governed by the constitution and the rule of law. My message is simple and emanates from the wishes I have for Eritrea to be prosperous peaceful and equal for its inhabitants which appeals to all Eritreans irrespective of their religious persuasions, Muslims or Christians alike. Unfortunately, for Eritrea “ላም ኣለችኝ በሰማይ ወተቷም ኣላይ” the appropriate proverb which describes its sad situation meaning a house built on dreams and wishes is useless. Isn’t it ironic that Pushkin, a Russian poet of “Eritrean decent” whom I have heard of in the 1950’s is honored by a sculpture in the heart of Eritrea and Eritrean heroes are chased and imprisoned? (ናይ ምዉታት ኣስከሬን ከተምጽእ ብሂወቶም ዘለዉ ክትሰጉግ ግቡእዶ?).

Abona Bishop Mekarios is highly educated, intelligent and well versed not only in the theological scriptures but also in the social, cultural and political as well as economic life of Eritrea and the world which we Eritreans including the bloody dictator should appreciate. After all Aba Mekarios is the only non-Egyptian member of the Holy Synod of the Coptic Church of Alexandria which should make us Eritreans proud to say the least.

Finally, the session for questions and answers was dedicated and everybody was asked to express their questions in writing and a number of questions were read by Father Yonas of Umeå and the Holy Father answered them in such a manner that everybody was laughing. Two of the first questions are mine and for the rest of the other questions and the details of the whole meeting, I refer the reader to the audio and video recordings of TV Smerrr and TV Dimtsi Hizbi (Kerkebet on YouTube): 1) The Eritrean orthodox church being the largest non-Muslim denomination is so quite concerning the mistreatment of our people in the hands of the pfdj gangsters, isn’t it odd? 2) Why is it not allowed for Eritrean Christians not to eat any flesh slaughtered by Muslims and vice versa? 3) Where are we supposed to baptize our children now that there are two churches, one that abides by the rules of the dictator and one that doesn’t?

The Holy Father gave a brief and concise answer to each and every question posed by the audience, 1) The Orthodox Church is in no position to oppose the brutal regime in Eritrea. 2) It is only cultural and baseless. 3) The bandits (shiftas) are found not only in the jungle/BereKa but also in the towns and cities like the current regime in Eritrea, so do not follow the jungle law.

A brief session was dedicated to the fearless priest Teklemariam Merkazion chief of priests in Europe (ርእሰ ካህናት ናይ ዞባ ኤሮጳ) who was imprisoned in the hands of the pfdj gangsters in Asmara for seven months. He briefed us on the messages of the Orthodox Church in Europe and what is expected from each one of us.

Finally, I once again refer the readers to watch the video footages at kerkebet and Smerrr TV in YouTube for details. This piece is only a brief reflection of my own observations. Apparently, we Eritreans at least here in Sweden can’t expect more than the presence of his Holiness Bishop Mekarios or maybe there is something bigger and that should only be the demise of the dictator in Eritrea, Amen!

Thank you Our Holy Father Mekarios, Bishop of North America, Europe and the Middle East!

Thank you Father Teklemariam Merkazion, Chief of priests in Europe!

Thank you Father Yonas, priest of the Eritrean congregation in Umeå!

Thank you Haben, the Deacon in Stockholm! And

Thank you so much once again to the organizers of this important event!

Glory to the Eritrean People!