By Petros Tesfagiorgis On Friday 11 October 2019 Prime Minister of Ethiopia Abiy Ahmed has been honoured with the award of the Nobel peace Prize for his efforts on the Ethiopian-Eritrean peace deal and international cooperation. 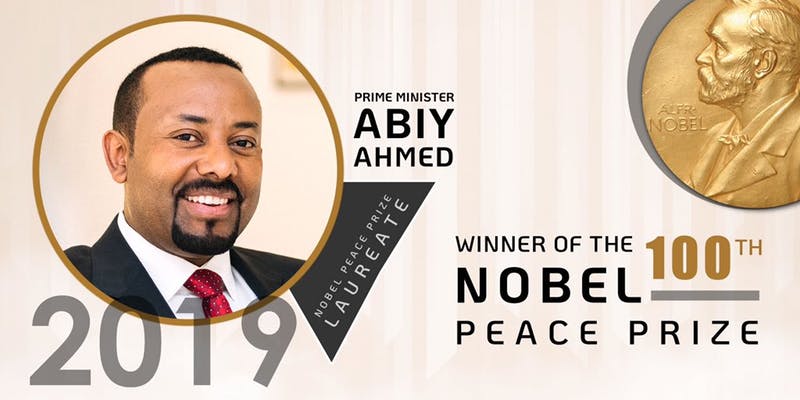 On Friday 11 October 2019 Prime Minister of Ethiopia Abiy Ahmed has been honoured with the award of the Nobel peace Prize for his efforts on the Ethiopian-Eritrean peace deal and international cooperation.  The award was announced by the Nobel committee Chair Berit Reiss-Anderson at the Norwegian Nobel Institute.

There were various comments on this issue: those who support the award and those who have reservations. The Sydney Morning Herald reports that the Norwegian Nobel prize committee agreed that Ahmed’s attempt for peace “deserve recognition and need encouragement”.

Some critics claim that this prize might be somewhat premature. Human Rights Watch (HRW) also notes that Ethiopia’s internal situation recently faced “increasing ethnic conflicts and an ongoing breakdown in law”.  The award relates more to the peace between Ethiopia and Eritrea, and it is therefore more rational to discuss in that terms. The bold move of Dr Abiy to break the 18 years stalemate means a lot for the people of Eritrea. The life of Eritreans under the threat of Ethiopian invasion – was very stressful. It was used by Isaias as escape goat to control the people of Eritrea, maintain the indefinite national service that destroyed the future of the youth and justify the shoot to kill policy. The peace has made all these unnecessary.  Eritrean life under siege by Isaias has created instability in the Eritrean mind-set and created divisions along lines of region, religion and ethnicity and political views. There are more than 15 political organisations in Diaspora.

The peace has given hope to the Eritrean people. The world has witnessed the happiness of both the Eritrea and Ethiopia/Tigreans peoples at the border in Zalambassa as they embraced, kissed and hugged each other, tears running down their cheeks. It was unforgettable time. Eritreans took advantage of the cheaper basic commodity goods, such as the stable food teff, as well as other necessities. But it was short lived as the Eritrean regime closed the border crossings making it difficult for people to freely meet let alone trade.

The UN Special Rapporteur on Eritrea stated that “the dividends of peace are not yet benefiting ordinary Eritreans, nor are there any signs to suggest they will.

Yes.  Significantly, Isaias has done nothing to end the tyrannical practice in his own country. Since the agreement more Eritreans than ever have fled over the border, many to refugee camps in Ethiopia. Indefinite National Service is still imposed on young people, and dissidents, including journalists, are still incarcerated in secret prisons without trial. Very soon the border was closed by Isaias with no explanation.  Isaias instead of reconciling with all people in Ethiopia, continued his hostility with TPLF/Tigray interfering in the internal affairs of Ethiopia.

After the signing of the peace with Ethiopia the youth saw no reason to serve the indefinite national service, and started campaigning (Zur Fenkil campaign) to end it. They were bold enough to distribute leaflets.  It started in the Capita, Asmara, and many high schools in the country did the same.

Sadly, the Diaspora justice seekers did not campaign and demonstrate in solidarity with these committed young Eritreans, which was expected from them as justice seekers whose main slogan is “the voice of the voiceless”.

The closure of 22 medical centres run by the Catholic Church that served about 200,000 people a year, and the 7 High Schools run by religious establishments is deemed to be the height of the regime’s cruelty.  To all these gross violations, not only the Ethiopian Government but also no other countries have condemned it or put pressure on the Eritrean government to reopen the clinics and the schools. Whether we like it or not, first and foremost, the responsibility to denounce the closures lies with the people of Eritrea, especially with the Diaspora justice seekers who have the luxury of opposing and condemning.

The recent defection of four young players from the Eritrean national under 20 football team during a tournament in Uganda is an indication of severe repression.

Mewal defected with three teammates. But after applying for asylum they are in hiding in Uganda, fearful that authorities from home are looking for them.

The peace is being sabotaged by Isaias. Isaias is playing with fire by telling Abiy to represent him in any international agreements. Such moves undermine the sovereignty of Eritrea.  One thing has become clear to the people of Eritrea, particularly to his supporters, that Isaias has no good intention for the people of Eritreans.

Because of all these Eritreans in Diaspora have risen up and started a powerful movement saying enough is enough (YEAKL), the regime has to go. It started in Washington DC and is spreading like a wild fire in all countries were Eritreans live.

What remains is for the YEAKL movement to strategize its action plan and proceed fast to its implementation. I am afraid the movement have lost a lot of time in organising itself and might have missed many opportune momentums.   The closure of the health centres has been raised by Eritreans in Italy and Germany.  Pope Francis has addressed the Eritrean vigil in Vatican and said “I pray for your people”.

Focussing on a disgraceful incidents such as the closure of many health centres and schools cannot be ignored by the UN, the International community and foreign governments, but we have to knock their doors. Staging demonstration can be done parallel with lobbying governments – and making representations to WHO (World Health Organisation) and UNESCO and other interested parties.

We are now reaching a crucial moment; the “Yeakel movement” are well organised to be able to work on advocacy campaign more effectively.  As I write this article I heard that TEMESGHEN  Net WORK revealed that Yeakle USA is organising a demonstration.  I suggest that they raise the issue of closures of clinics and schools.  It is a going issue that needs follow up and investigating the impact of the closures on the beneficiary villagers who are the poorest among the poor.  The study can be done by professionals, journalists and others.  It is a move that can connect Yeakle movement with the people. Putting the pains and suffering of the people at the centre of the campaign is the best strategy.