The absence of peace is ruining the life of Eritreans and the neighbouring people. – Time to start peace movement. 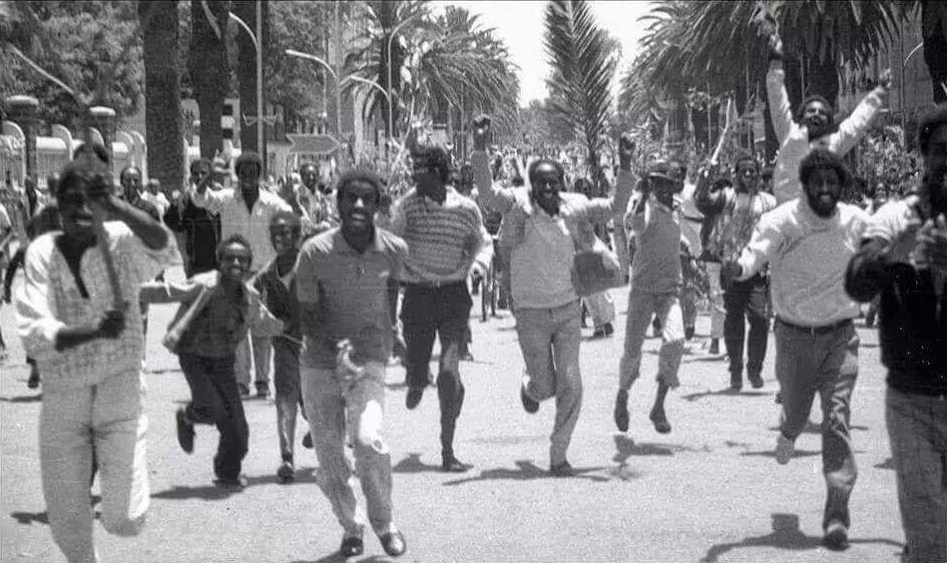 The absence of peace is ruining the life of Eritreans and the neighbouring people.

The absence of peace is ruining the life of the people of Eritreans.  The people express their longings for peace at funerals during New Year celebrations and at religious events. The people of Eritrea are crying out for peace.  But their voice has remained unheard.  The people inside Eritrea cannot organise a campaign for peace, other than express their wishes and pray. There is no freedom of expression, let alone the right to demonstrate for peace. But the Diaspora can do it. If they do, it will give energy to their activities for unity and justice. So far most of the activities are reactive and short term. Peace movements are proactive with a proper action plan.   For the religious leaders it will be a spiritual journey.

To initiate a peace dialogue with the people of Ethiopia is a priority because no-peace, no war has   served the Eritrean regime as an escape goat to hold the Eritrean youth hostage under the programme of indefinite national service/forced labour, which gave rise to the influx of huge number of refugees to exile, as well as other forms of human rights violations. Today Eritrean refugees are part of “Europe’s Refugee Crises”. Because of this, Western countries has a stake in peace in the Horn.

Peace with the people of Ethiopia is not as difficult as people may think.  There is deep rooted historical and cultural link between our peoples.  Co-operation in the fight against the Military Junta that deposed Emperor Haile Selassie in February 1974 built strong bonds of solidarity and trust. In the middle of the 1998-2000 war concerned Eritreans have formed an organisation called “Citizens for Peace in Eritrea” of which I was a founding member. Unity among Eritreans and peace with the people of Ethiopia. When it organised the first peace conference in Keren and Asmara – the support it got from the people was amazing.  That experience has convinced me that peace movement will work.  (I will write about CPE separately).

In late 60th the Haile Sellasie 1 University students were extremely concerned of the poverty and lack of development that prevailed in Ethiopia. Progressive Ethiopian University students were inspired by the teachings of Marx and Lenin and started to see the socialist ideology as a way out of poverty and oppression.  Slowly the socialist leaning, progressive university students got the upper hand in the students union and began exposing the feudal regime for mismanaging the people and the economy in their newspapers and in debates.  They also organised demonstrations – condemning the Imperial government for ignoring the 1972 famine in Ethiopia and the unfair land holding system which deprived the Oromo population   of their ancestral lands. The rallying cry was “Land to the tiller.”   Land was at the centre of the uprising of the Oromo people, the largest ethnic group in Ethiopia: about 45% of the population.  It was the 1972 famine and the unfair land holding system that led the downfall of Emperor Haile Sellasie.

The Ethiopian University students were the most radical students in Africa.  They managed to influence the high school students – and created a revolutionary climate in Addis Ababa and in the provinces.

The reaction of Eritrean Students:  The Eritrean progressive students came to realize that if the oppressive feudal system was replaced by a socialist Government the problem in Eritrea could be solved peacefully based on the right of people to self-determination.  At that time an armed struggle was raging in the lowland of Eritrea that stated in 1961 by Eritrean Liberation Front (ELF). This was labelled as the mother of the Eritrean Revolution.

The Eritrean university students saw a light at the end of the tunnel and became very active in the Ethiopian students’ movement. Thus the Addis Ababa University has become the melting pot of revolutionaries. It brought together students from different nationalities to get to know each other.

The Eritrean students were encouraged to involve more when, for the first time, the question of the right to self-determination of the oppressed nationals was raised by an outspoken activist, Walelegn Mekonen (1).  After that the question of Eritrea was being discussed openly, but informally between Eritreans and Ethiopians and this worried the Imperial Government.

Many Eritreans   had played a pivotal role in the student movement, including Temesgen Haile and Petros Yohanees Adgoi both editors of the radical University City Wide Union newspaper.  Yohannes Sebhatu was one of those who became Marxist Gurus who supported   the out spoken   Berhane Meskel Redda– the pioneer leader of the left in the university.  There were others from different   nationalities such as Gebru Mersha and Gebru Gebrewold.

Accordingly, the EPLF changed its political narrative to one that declared that the EPLF was fighting against the repressive regime in Ethiopia, and not the people of Ethiopia, who were oppressed themselves. When it became clear that the Ethiopian army had hijacked the revolution, the revolutionaries saw no alternative except to resort to armed struggle. It is at this decisive moment, when events in the Horn were at cross-roads, that The Ethiopians People’s Revolutionary Party (EPRP)   and the Tigray People’s Revolutionary Front (TPLF) were formed. There was urban confrontations, during which thousands of university and high school revolutions lost their lives, as the Military unleashed the red terror campaign.  It was a massacred, among them was Haile Fida, the leader of MESON party.

The EPRP and the TPLF got their first training in Sahel with the EPLF. TPLF grew into formidable force and had a successful militarily cooperation with EPLF. Unfortunately the EPRP did not. The EPLF alliance was not only with TPLF, but with other liberation forces as well. There were times when the Oromo Liberation Front (OLF) and EPLF fighters carried out military operation together. The most successful   lighting attack by combined EPLF and OLF forces against the Ethiopian army took place in mid-1980 in the South of Ethiopia.  It struck fear into the Military Junta. At that time the EPLF army travelled all the way through the Sudan, to join the OLF in the South.

Finally it was the military coordination of EPLF and TPLF that defeated the repressive Ethiopian regime in 1991, despite the Junta’s sophisticated military equipment, such as Stalin Organ, Migs and gunship helicopters supplied by the Soviet Union. 7 Soviet advisers were captured during the famous battle of Afabet in 1987. Afabet was the strongest military garrison in the lowland area.

When in 1991 the Ethiopian army finally surrendered to EPLF in Asmara – the jubilant residents went out to the streets dancing. It was time to celebrate and be joyful.

For the people of Eritrea the end of the 30 years was the mother of all wars.  The people thought there would be no more wars. It was time to rehabilitate the society and the economy; time to live in peace with Ethiopia. Soon enough the two Governments agreed to allow the free movement of people and goods between them, and the use of both Eritrean ports, Massawa and Assab by Ethiopia.

Both governments revived IGAD and planned to connect all the neighbouring countries by road and cable etc. Hitherto   dormant IGAD was re-activated   an Eritrean Dr Tekeste Gebrai was appointed as its Secretary. He has a story to tell of projects to integrate the countries of the Horn and nearby countries which was frustrated because of the war.

All this won the leaders of Ethiopia and Eritrea the respect of many countries and especially American President, Clinton – who expressed the dawn of   new era in Africa. He declared   President Isaias, Afewerki, PM Meles Zenawi, Uganda’s Yoweri Museveni and South Africa’s Nelson Mandela as ‘Africa’s renaissance leaders.’  Hilary Clinton visited Eritrea, and she was given a traditional white dress during her invitation by the Eritrean National union of women.

In one of her meetings in the United States Hilary Clinton spoke highly of Eritrea’s organised civil societies, which rendered services to their communities voluntarily, with diligence and total commitment. The EPLF mass associations were the Ambassadors of the struggle, soliciting political, diplomatic and humanitarian support in the countries they lived. Unfortunately the EPLF dismantled the well organised mass association at the eve of independence. Today there is no room for independent civil societies in Eritrea.  The National Union of Eritrean workers, the youth and the trade unions and the YPFDJ in the Diaspora are mere tools of disinformation. They just do what they are asked to do.  They never raise the gross human rights violations in Eritrea with the regime they support.

After independence Eritrean professionals and business people flooded back to Eritrea to participate in the economic and social rehabilitations of the country. After the war all these people returned to where they came from not only because of the war, but because the private sector, the engine of economic growth was not allowed to flourish in Eritrea. Eritrea is one of the poorest countries in the world.

The EPLF/PFDJ has won the war but lost the peace: PFDJ has maintained the culture of war. Isaias thrives by wars.

In essence, the senseless Ethio-Eritrean war that started in August 1998 damaged the solidarity and trust between the people of Eritrea and Ethiopia, a relationship cemented in sweat and blood. It is simply a tragedy.  I and my friends felt helpless and powerless to do anything about it. This was true for the rest of the Eritrean people. But at least we started an organisation called Citizens for Peace in Eritrea (CPE). I was refused   demobilization and was assigned to work for the Commercial Bank of Eritrea so I had spare time for CPE.  It gave me some consolation during those dark days. It is not only the wars that affected the people but the silent war, war in the form of gross human rights violations against the people, the absence of the rule of law and the abolition of freedom of expression that is destroying the fabric of the Eritrean society.  Thus our dream of building prosperous Eritrea at peace with itself and its neighbours especially Ethiopia was shattered. The senseless and avoidable war was brought about by quarrels between the two hitherto friendly governments. They could have   solved any quarrel on the negotiation table. Indeed, this is what happened finally, in Algeria.  At the Algiers negotiations the person who advocated ceasefire   with passion and diligence was the martyred foreign minister, Haile Woldetnsaie (Durue) together with his counterpart, Ethiopian Foreign Minister Seyoum Mesfun. The best way to remember the death of Haile Durue is to campaign for peace which was close to his heart. (6)

Today   the Eritrean and Ethiopian people can re-claim their lost relationship and campaign for peace but it is a very challenging initiative. I end my article congratulating Dr Abdi Ahmed for his success in getting elected as the Ethiopian Prime minster. I hail his conciliatory and full of wisdom talk in his inauguration and his peace gesture towards Eritrea.

To be continued in part 2.  The challenges of peace campaign: