Education is one of the most important national investments that has to be done to impact the life of people and their futurity. A radical societal transformation cannot be achieved without well synchronized educational system, 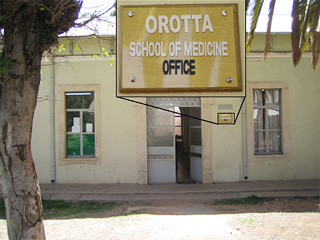 Education is one of the most important national investments that has to be done to impact the life of people and their futurity. A radical societal transformation cannot be achieved without well synchronized educational system, but the standard of higher education is moving down. It is less likely that Eritrea could advance in science and technology in short time.

Most of the outstanding Eritrean students often join Orota Medical School as they are less interested in studying at substandard colleges. Initially, the medical school had better affiliation with Cuban University and George Washington University; and started gaining a decent academic standard through their channels. The performance of the students, gained in different areas of medical education, was approved by experts from the United Kingdom, the United States, some others from the Middle East and other countries in Africa. The architect of the medical school was Dr. Haile Mezghebe in collaboration with late Minister Saleh Seid Meki who was a renowned government diplomat in an era of authoritarianism. Nonetheless, Dr. Haile Mezghebe was totally frustrated…

The promising medical school is being turned into a ground of psychological harassment; and the school system is causing a dilemma among outstanding MD candidates, who are investing their time for more than 7 years. These are the ten reasons why Orota Medical School in silent demolition:

Therefore, school dropout is going up; and students’ performance becomes stagnant or partly deteriorated. All concerned Eritreans in general and academic professionals and Project Orotta in particular should investigate the ill-management of the school. We need more medical doctors to meet the shortage of human power in health sectors and ensure the health quality of our people.  Our young successful female MD candidates should be motivated for their consistent efforts that they are doing to build a healthy community. We have moral obligation to pay a particular attention to female students who are strongly fighting against all odds. We cannot change the life of the society without educating our female students.