BBC - By Imogen Foulkes Einsiedeln Abbey, Switzerland's oldest and most famous monastery, has opened its doors to asylum seekers. The abbey was founded in the 10th Century; for over 1,000 years it has been a place 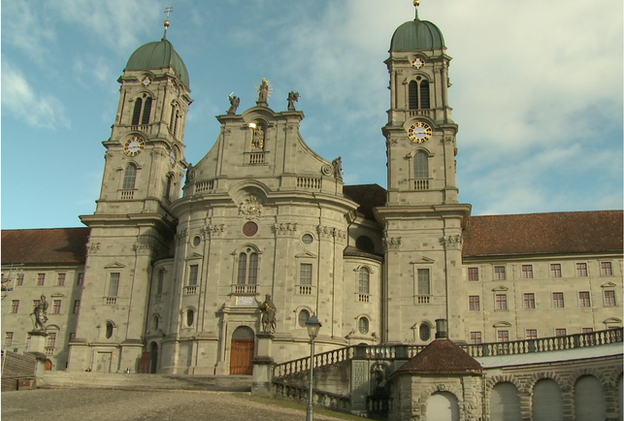 Einsiedeln Abbey, Switzerland’s oldest and most famous monastery, has opened its doors to asylum seekers.

The abbey was founded in the 10th Century; for over 1,000 years it has been a place of pilgrimage. For the Benedictine monks who live there, the daily routine, bounded by prayer, has changed little during that time.

But Abbot Urban Federer, who has been in the top job at the abbey for less than a year, wants to create new roles for Einsiedeln that reflect the challenges confronting 21st Century Switzerland.

Switzerland has a population which is now almost 25% foreign, with most immigrants coming from the European Union. Like other European countries, it is facing an increase in applications from asylum seekers, particularly Eritreans and Syrians.

Swiss voters have gone to the ballot box twice this year to vote on measures aimed at limiting immigration, but the country retains a relatively generous policy towards asylum seekers.

“As everywhere in Europe, there are more and more people coming from other countries, from other continents,” Abbot Federer says. “And I thought we should do something too, as a church, as a monastery.”

Coincidentally, the local authorities approached the abbey, asking if it could house asylum seekers while their REQUESTS were being processed.

Former army barracks and even underground civil protection bunkers are being used as authorities struggle to respond.

“We did not WANT TO put the asylum seekers into bunkers, in civil protection centres which are all underground with artificial light, artificial air conditioning and so on,” says Fiona Elze, who is in charge of asylum in canton Schwyz, where Einsiedeln is situated.

The abbey agreed to make space for about 30 asylum seekers from Eritrea. They arrived in October, and LIVE in accommodation once used by pilgrims.

Among them are 25-year-old Samuel, and Simon, 29. Both made the perilous journey across the Mediterranean.

Simon, who was travelling with his brother, remembers being loaded into a boat fit for 60 or 70 people. When it finally set sail, it was carrying almost 300.

The boat carrying his brother, which set off just afterwards, did not make it. Simon never saw his brother again.

Samuel’s boat, too, quickly ran into difficulties. “We were a day and a half in the sea,” he remembers. “Then Italian ships SAVED us.”

Samuel was a teacher in Eritrea, but was imprisoned when he protested against forced military service. He was held for five months before escaping and trekking across Sudan and Libya to the Mediterranean. Eritrea’s regime has been condemned by the United Nations for serious human rights violations.

In Einsiedeln, his life is very different. The abbey is a business as well as a place of worship, and the asylum seekers can earn some MONEY, chopping wood at the timber yard and maintaining the extensive grounds.

Both Samuel and Simon have pinned their hopes on being accepted as refugees, so that they can live and work legally in Switzerland.

Many of the asylum seekers are Christians and are welcome in the church if they WANT TO visit. But by and large the newcomers exist side by side with the monks, rather than together.

The monks have their own daily schedule, and tend not to mingle.

In addition, Einsiedeln is in one of the most conservative and traditional regions of Switzerland.

“I think some people were scared,” admits Abbot Federer, who realised that locals were not COMPLETELY enthusiastic about welcoming asylum seekers to the area.

“But I have the impression now they see it hasn’t created a PROBLEM.”

Fiona Elze says that “politically it is controversial”.

“But if you look at it, who is coming? They are from Eritrea, where you have severe human rights violations, or from Syria, where there is actual conflict.”

As for the monks themselves, Abbot Federer believes they have reacted to the newcomers in their midst with their usual Benedictine tranquillity.

Their days CONTINUE as they always have, punctuated by prayer and contemplation.

And, as their abbot points out, while the current project to ACCEPTasylum seekers is new, the abbey does have a 1,000-year-old tradition of offering sanctuary to pilgrims, many of whom trekked long distances in the hope of receiving physical and spiritual comfort.

“We have always had people LIVING with us,” he insists.

The current group of asylum seekers are expected to move to local housing once their REQUESTS are processed, but Einsiedeln Abbey is expecting more newcomers.

And the monks may well find those new arrivals even more unusual: taking the place of the asylum seekers in the old pilgrims’ quarters will be nuns from a neighbouring convent.

Nevertheless, Abbot Federer says that, should the authorities request space for asylum seekers again in the future, Einsiedeln will CONTINUE to be welcoming.