The Supreme Court has nullified the re-election of President Uhuru Kenyatta. A six-judge bench, by majority decision, on Friday indicted the Independent Electoral and Boundaries Commission (IEBC), saying it conducted the elections contrary to the dictates 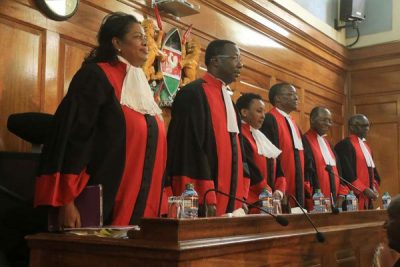 The Supreme Court has nullified the re-election of President Uhuru Kenyatta.

A six-judge bench, by majority decision, on Friday indicted the Independent Electoral and Boundaries Commission (IEBC), saying it conducted the elections contrary to the dictates of the Constitution and poll laws.

“A decision is hereby issued that the elections held on August 8, were not conducted in accordance with the Constitution and the applicable law. The results are therefore invalid, null and void,” Chief justice David Maraga said.

“Elections is not an event but an process. After considering the totality of the entire evidence, we are satisfied that the elections were not conducted in accordance to the dictates of the Constitution and the applicable principles.”

Judges Jackton Ojwang and Njoki Ndung’u dissented while judge Mohammed Ibrahim, who fell ill on the second day of the case hearing, did not take part in the decision because he is still in hospital.

Justices Ojwang’ and Ndung’u said the petitioner, National Super Alliance (Nasa) leader Raila Odinga, had failed to prove claims that the polls were rigged in favour of Mr Kenyatta.

The two said the polls were free, fair and credible as described by international observers.

Justice Ndung’u said challenges face every election and if they occurred, they were not deliberate or in bad faith.

The top court in Kenya, in a bold move, ordered the IEBC to conduct a fresh presidential election within strict confines of the law within 60 days.

Lawyers who represented President Kenyatta and the IEBC protested the judgment and sought explanations and clarifications from the judges.

Lawyer Ahmednasir Abdullahi, for Mr Kenyatta, faulted the court, saying it had made a political decision because no one is disputing that the voter made his decision.

According to him, Lady Justice Ndung’u upheld the wishes of Kenyans.

But Justice Maraga said, in due time, they would be able to demonstrate why they reached their decision.

Nasa lawyers, led by James Orengo, were happy with the decision and thanked the court for agreeing with them that IEBC flouted electoral laws.

“The decision is history. The first judgement in Africa that has upset a presidential election. Supreme Court has done Kenya proud and lived up to the principle and law regarding election,” he said.

“The decision by the court means well have new presidential election within 60 days. We hope this time around, they will not make the mistake of generating elections through computers.”

“What IEBC did was treasonable because they wanted to declare the presidency against the Constitution. I don’t think IEBC will preside over the election.

The decision has is a big win for Mr Odinga and his running mate Kalonzo Musyoka, who accused the IEBC of rigging the election in favour of Mr Kenyatta.

The two rejected the results even before they were announced on August 10, accusing the commission of imposing “computer-generated leaders” on Kenyans.

The quashing of Mr Kenyatta’s victory is particularly important to Mr Odinga because it has granted his political career a lifeline.

Aged 72, Mr Odinga had promised his opposition co-principals that it was the last time he was running for State House after previous three barren attempts.

After the vederct, Mr Odinga told his supporters that their march to what he has branded “Canaan” , the famed promised land, was unstoppable.

“This is a historic day for Kenyans and Africa. For the first time in history of democratisation in Africa, ruling made to nullify a presidential eletion,” he said

‘’Our journey is unstoppable. IEBC committed criminal act and belong to jail.”

Mr Musyoka, on his part, said Friday was a historic day not just for Kenya but Africa.

“The dignity of Supreme Court has been established. I am happy to be a Kenyan today. We will have to look deeply into the conduct of IEBC. We do not have faith that they can conduct a credible election,” he said.

After issuing the verdict, Mr Maraga, who is also the president of the court, urged Kenyans to maintain peace, saying an election is a process and not an event.

He pleaded with lawyers to help the country in maintaining the peace.