November 9, 2014 (KHARTOUM) – The Sudanese police have freed six Eritrean nationals who were abducted by a human trafficking gang in the state of Kassala in eastern Sudan following fierce armed confrontation. The hostages were 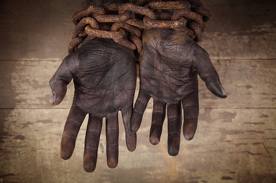 November 9, 2014 (KHARTOUM) – The Sudanese police have freed six Eritrean nationals who were abducted by a human trafficking gang in the state of Kassala in eastern Sudan following fierce armed confrontation.

The hostages were found chained to each other in east Atbara River area waiting for payment of ransoms to secure their release.

Kassala police chief, Omer al-Mukhtar, said the kidnappers demanded ransom to free the abductees, saying that police raided the area where the hostages were kept and freed them based on information made available to it.

He added the victims were found chained to each other and suffering from hunger and thirst, pointing the perpetrators fled during the confrontations to free the abductees.

The director of the anti-smuggling department at the eastern sector, Murwan al-Hussein, told the official news agency SUNA that the police received information about existence of smuggled goods and suspicious vehicles in the area.

He said that a police force searched the area and exchanged fire with the gang members, pointing the abductors fled the area leaving behind 6 hostages and a truck loaded with foodstuff besides 6 boxes of cigarettes and a G4 rifle.

Al-Hussein called upon all citizens to cooperate with the police and report on the negative phenomena and unusual and suspicious movements, urging refuges not to fall prey to the human-trafficking gangs in their quest to migrate to Europe.

“Victims said that Sudanese and Egyptian security officers facilitated trafficker abuses rather than arresting them and rescuing their victims.” the report said.

Last Month, Khartoum hosted a conference on human trafficking in the Horn of Africa, organised by the African Union (AU), the UN High Commissioner for Refugees (UNHCR), the International Organization for Migration (IOM) and the Sudanese government. Fifteen countries and European Union representatives attended the meeting, during which a joint strategy and action plan to combat human trafficking was adopted.

Sudan’s commissioner of refugees affairs, Hamad al-Gizouli, had previously said that 102 human trafficking incident has been registered in Sudan during 2013.

Eastern Sudan in particular is believed to be serving as a passage to migrants from Eritrea, Ethiopia and Somalia who seek to reach Europe with the help of human smugglers.