By Rally Organizers The day was Thursday, 7th 2013, the weather of Stockholm was sunny but very cold minus eight degrees centigrade.. Demonstrators started gathering at 12.45 local time. They came from cities of Uppsala, Sheleftea, 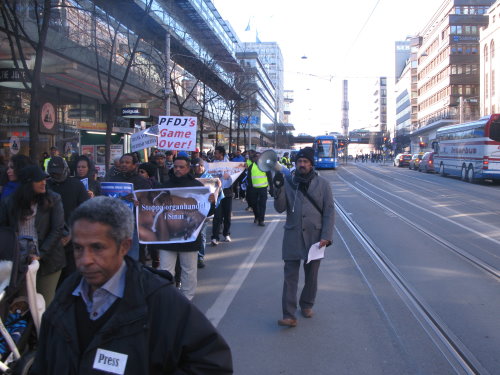 The day was Thursday, 7th 2013, the weather of Stockholm was sunny but very cold minus eight degrees centigrade.. Demonstrators started gathering at 12.45 local time. They came from cities of Uppsala, Sheleftea, Malmo, Katrineholm from Sweden and a bus carrying about 30 people came from Denmanrk. They all met in the heart of the city of Stockholm with their slogans , streamers and brochures explaining the Eritrean Refugees suffering in Sinai and giving tribute to the Forto Asmara Martyr Wedi Ali- the symbol/icon of the struggle for democrtic change. The rally was all inclusive in its composition – representing unity in diversity. Rally organizers welcomed the demonstrators defying the cold weather  and their steadfastness and determination to demonstrate against the totalitarian regime in Eritrea which is the main root of ll these agonies.

When all the assumed participants arrived in the decided place after 40 minutes it started its march towards the Swedish Parliamnet escorted by police and own guards. Shouitng and reciting slogans and catchwords made the whole city and trafic wait and watch the rally. On their way to the Parliament through the main street all trafic stopped and echoes of the slogans were heared in all the city of Stockholm. The marching rally was as long as one 1km. It was the first time to conduct such marching rally in Stockholm since the foundation of the partnership for democratic change was established in 2009 comprising all political, civic and independents in Stockholm and its suburbs. The marching from the centre of the city to the parliament has taken 30 minutes

Mr. Arhe Hamednaca  from Social Democratic party delvered his speech stressing the illegal activities of the regimes emabassy extorting and collecting taxes from Eritrean diaspora. He further analysed that the his party is working hard to stop this illegal activities and instead support the democratic forces in Eritrea. He urged the demonstrators to come united and and appela the international community together instead coming in groups.

Mr. Kaplan Mehmet from the Green party , in his part, presented the situation in Eritrea as inhumane and brutal. He appreciated Mr. Arhe’s courage to bring the case of Eritrea in the Swedish parlaiment and het old the rally that they will drive the case until they persuade the governmewnt of Sweden to take a clear stand  against the regime in Eritrea. Both of them agreed that the silent diplomacy has no effect and cannot function with dictatorship in Eritrea.

Meron Estifanos presented her speech focusing the tragedy of the Eritrean refugees in Sinai/ Egypt. She stressed  the brutalities, rape, torture and murder with illustrative pictures.  She urged the Swedish government and parliament to act to save these refugees.

Br. General Tekeste Haile  presented his speech on the current situation in Eritrea and urged that the  opposition forces unite their efforts to get rid of the dictatorship in Eritrea and build a democratic Eritrea representing all the Eritreans.

A wonderful support speech was delivered by a journalist from Syrian. Het old the demonstrators that the Syrian people and their movements for democratic change are on the side of the Eritrean people.

Other speakers were the youth born in Sweden who has explained their anger against the systme in Eritrea that has been the root cause of refugees.

The rally submitted its memorandum both to the government and parliament early in the morning.

The rally was concluded successfully at 16.00 local time.