Mike Tekeste held the woman’s hands for 10 minutes as her body dangled off the side of the Wabasha Street Bridge in downtown St. Paul one morning last August. She begged him to let go. She said she wanted to die. “If 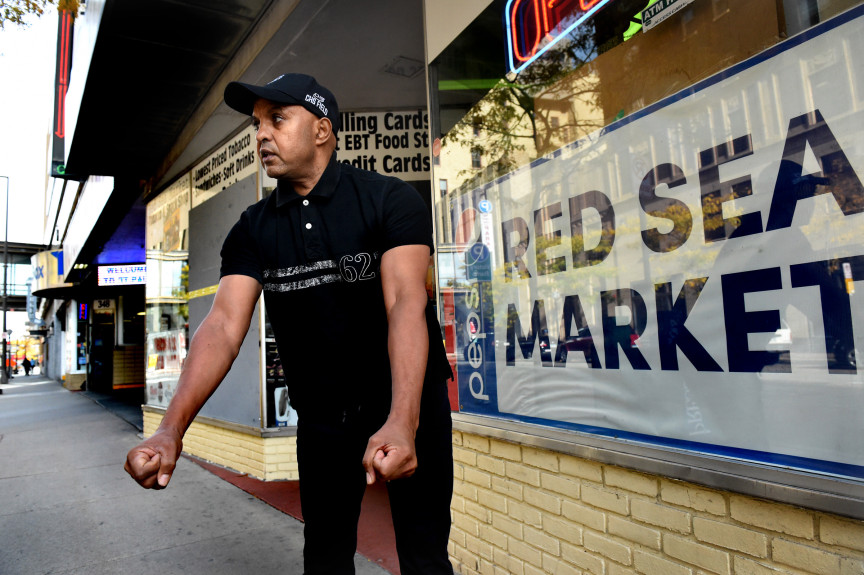 Mike Tekeste held the woman’s hands for 10 minutes as her body dangled off the side of the Wabasha Street Bridge in downtown St. Paul one morning last August.

She begged him to let go. She said she wanted to die.

“If you love your family, you don’t have to do this,” Tekeste told her. Soon, Ramsey County sheriff’s deputies arrived and helped Tekeste lift her over the railing.

On Monday, Tekeste will receive the Ramsey County Sheriff’s Award for Excellence for his lifesaving work. Deputies Tom Maher, James Moeschter and Tony Gutzwiller also will receive awards for aiding the effort.

On most workdays, Tekeste parks his vehicle right outside the Red Sea Market, a convenience store he owns on Wabasha Street across from the Ramsey County’s attorney’s office. But the weather was especially nice on Aug. 9, so he decided to park on the other side of the bridge and walk to his market.

Tekeste said he saw a piece of luggage as he crossed the bridge. He then looked over and saw a woman hanging from the railing. She told him to tell her family that she loved them, he said.

Tekeste grabbed her hands and talked and pleaded with her as he shouted for help. Another man stopped and took one of the woman’s hands when Tekeste’s began to slip. Another passerby called 911. The deputies arrived and helped lift her back over the railing.

Many of Tekeste’s customers have heard the story and are not surprised by it.

“It’s not shocking,” said Dan Sorensen, who has visited Tekeste’s store almost every workday for nearly a decade. “He’s a good guy.”

Tekeste has owned and operated the Red Sea Market for 11 years. His shelves are lined with everything from candy and chips to laundry detergent and greeting cards. His regulars stop in primarily for cigarettes or caffeine fixes.

“Most people are nice,” he said. “A few people always have problems, and those people aren’t going anywhere.”

Earlier this month, someone kicked his store window and shattered it. Video surveillance footage on his phone shows people stealing candy bars and bags of chips by shoving them down their pants.

But it didn’t spoil Tekeste’s demeanor. He still makes small talk with his customers and blasts ’80s Billy Ocean tracks from his computer, often while dancing behind the counter.

“If you don’t like something, change it,” a sign near his register reads. “If you can’t change it. Change your attitude. Don’t complain.”

Along with those who saved the bridge jumper, Ramsey County Park and Recreation lifeguards Mason Krelitz, Yudeli Perez, Daniel Rapartz and Nick Schlecht will also be honored Monday by the sheriff’s office after saving a man who was assaulted July 30 by three other men near Lake McCarrons in Roseville.

Deputy Jason Mikle will also receive a lifesaving award for helping a man in a motorcycle accident.