KASSALA CATHOLIC SCHOOL FOR THE REFUGEES. CLOSING OF THE 2016-17 SCHOOL YEAR. FORTY YEARS OF SERVICE

Dear friends and benefactors, We are glad to share with you a descriptive and photographic account of the ceremony of the closing of the 2016-2017 academic year of our Catholic School for the Refugees in Kassala, 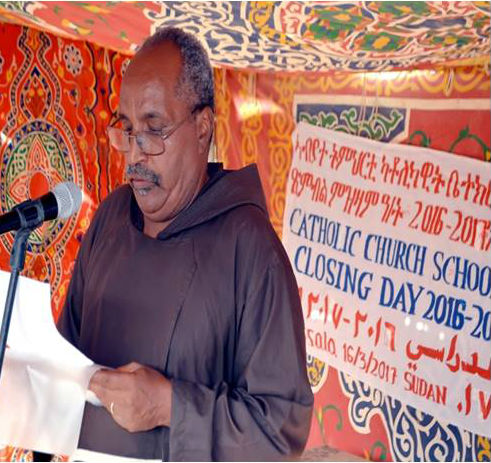 We are glad to share with you a descriptive and photographic account of the ceremony of the closing of the 2016-2017 academic year of our Catholic School for the Refugees in Kassala, Eastern Sudan. The celebration had a particularly significant flavour,  as it comes to bring the 39 years of the existence of the school into the fortieth (1977-2017). This is another more year that your generous support has made possible, thus donating to our young men and women, to their parents and teachers, and to ourselves, the joy of reaping  the fruits of a job well done, the result of an ongoing commitment to a serious work. All the more so if one considers all the odds that the life of a refugee community brings with itself. For all of this there is, in all of us, a legitimate sense of pride and joy, something that our photographers have tried to “capture” in the pictures accompanying the present report. The ceremony, involving the three sections of our school – i.e. the elementary, the junior and the senior high classes – took place on 16 march 2017 in the premises of the elementary school. It highlighted three different events: the closing of the academic year, the commemoration of the 40th anniversary of the founding of the institution, and the graduation of the young men and women who have successfully completed the last year of high school (12th grade).

To share in, and honor the, event were present, with us, the priests of the local Most Holy Saviour’s and St. Michae’s  Orthodox churches, the ministry of education’s  sector-head for the non-governmental schools of the province of Kassala his Excellency Mr. Staz Babuker Kelay, the president of the same province’s Teachers’ Association, and the leaders of the Eritrean, Ethiopian, Sudanese and Indian communities.

At 15.00, teacher Weldehiywet Kelete opened the program with words of welcome to the participants, to leave then the floor to the male and female students of our three schools. It turned out to be a five  hours extremely enjoyable  entertainment, interspersed with poems, sketches, recitals, songs and dances rich with messages and contents. It was a colorful prism of cultures and languages – Tigrigna, Amharic, Tigrè, Bilen, English, Hindi -, a mirror of the multi-cultural peculiarity of the communities revolving around our schools. What clearly emerged from the whole program was how successful has been the effort we have always put on keeping our youngsters entrenched in their cultural roots on the one part, and the enhancement  of a reciprocal enrichment between the various cultures, on the other. This “banquet of differences”, in fact, has always been a distinctive mark of our school right from its inception, forty years ago. A song composed and performed by the students articulated, with moving words, their deep gratitude to the founders, benefactors and teachers, for making the forty years of the existence of this institution a “success story”.

Here below are a few  fragments from the various talks delivered during the program.

A delegate of the students touchingly evoked the memory of the late Fr. Marino, to whose prophetic insightfulness we owe the first steps of this schools. He understood, before anybody else, the critical importance of an institution such as ours for the moral and intellectual growth of the younger refugees. Ever since, until his untimely death in 2013, he continued to support it  with all the means he was able to muster. His life and work will be ever remembered and blessed by all those who had the opportunity to seat in the  classrooms  of our schools. No lesser a tribute, the student added, is due to Fr. Ghebray, current general director, who has taken over from his late confrère. He continues to spend his energies tirelessly for the life and the growth of our school, particularly by conveying our call for financial help to our benefactors abroad.

Representing the teachers, Mr. Kiflay entertained the audience on the topic “The Catholic School for the Refugees 40 years from its inception”. While expressing deep appreciation and gratitude for the past four decades in general, and for the past school year in particular, he went on to illustrate the interaction between the educator and the educated, by comparing it to the relationship between the peasant and the land: the fruitfulness of the outcome depends on both the receptivity of the terrain and the diligence and industriousness of the peasant. Such an outcome has been exemplarily achieved in the  past forty years, just as it has been confirmed by the school year we are closing today. Suffice it to mention that, so far, no less than 24.000 Eritrean, Sudanese, Ethiopian, and Indian young men and women have passed through our classrooms, steeped in a unique atmosphere of cultural plurality and religious diversity, characterized by the  harmonization of differences. Hence therefore, on behalf of the beneficiaries, I pay homage to all those who have contributed to this outcome: students, teachers, parents and, above all, the Catholic Church in General, and the Capuchin friars in particular. It is for all of us now to continue on the same path for the incoming decade that will lead us towards the golden jubilee  of the school, as we commit ourselves to continuing to build our future in that unity of intents that has always accompanied us, along with  the compliance with the rules of the school and the diligent commitment of the parents. Their contribution  within the family walls constitutes the foundation of our work as teachers.

Second to take the microphone was the general director of the school, Fr. Ghebray Beedemariam. He first of all thanked the Sudanese government for its openness to, and its collaboration with us. Most praiseworthy is also, he said, the freedom it gave us to educate our young men and women in full respect of their cultural, moral and religious roots and identities. I wholeheartedly wish to thank the government authorities for their support and encouragement in all circumstances, and for the concrete opportunities they have always offered us. We are as much grateful for the designation of our city, Kassala, as the venue of  “The Student’s National Festival”. The Catholic Church has, during the forty years of the unremitting  inflow of refugees, stood by us and met all our needs through the presence and ministry of the Capuchin Friars, so as to provide our students with a qualified moral and academic education. Such a commitment has entailed a great deal of hard work on the part of the friars, particularly in terms of raising the much needed financial resources. Our benefactors in Europe have generously and tirelessly responded to our call for support. To them goes our overwhelming sense of gratitude and appreciation.

Without their helping hand these 40 years would have never existed! We salute the memory of the late Fr. Marino Hailè, whose loss is so deeply felt by each one of us. His name will perpetually remain on top of the list of the Capuchin friars who throughout the years have ministered to the refugee community in this country and have educated its younger members.  The beginnings of the school,  very much like all the beginnings, were quite humble. It all started in 1977 with the first elementary classes, held under a rudimentary  tent. Within a few years the other classes of the same section and the junior secondary classes were added. In 1997, when the UNHR planned the closing of its senior secondary school, we asked and obtained to move in. After three years of joint running of the institution, we took up full responsibility for it in 2000. The output of the past 40 years have already been mentioned: 24.000 students, 60% boys and 40% girls, have been educated in our classrooms.

Today a sizeable number of them is filling respected professional positions and jobs. The success however is not only numerical, but also qualitative, as it is attested to by the excellent results achieved by our students in the  university’s admission tests. All of this is the outcome not only of the students’ effort, but also the fruit of the close collaboration between parents and teachers, all the more remarkable if we take into consideration the harshness of the life conditions of a community of refugees. I scarcely need to insist on the responsibility of the parents to watch over, and pay attention to, the use that their children make of modern technological instruments. An unwarranted and uncontrolled access to them may cause the waste of precious time and, more importantly, endanger their balanced psychological development and healthy human growth.

Fr. Gherbay’s talk was followed by the conferral of awards to the most veteran teachers who served in the school during the course of the past 40 years.

The last speech was given by His Excellency Mr. Babeker Kelay, responsible for the non-governmental schools in our province. He paid tribute to our institution for the 40 years of its indefatigable  service to the youth of the refugee community. Thanks to this commitment, this school has emerged as one of the best non-governmental educational facilities in the whole region.  Its inter-cultural character and its respect for the variety of races, religions and traditions of the student body – just as evidenced once again by this afternoon’s successful cultural exhibitions – deserve our highest appreciation. The school, Mr. Kelay concluded, will be most welcome to participate, with its own contributions, in the upcoming “Students’ National Festival” to be held in this same city.

At the end of the afternoon, Fr. Gherbay and his two fellow Capuchin friars, Fr. Solomon Negga and PietrsWelde, went up on the stage to distribute various prizes to students who have distinguished themselves for their academic commitment and profit. All in all, a joyful afternoon and a rewarding shared experience!

Dorector of the schools