World leaders are attending a major conference on the future of Somalia in London to focus on finding peace and ending threats of terrorism and piracy. As it opened, UK Prime Minister David Cameron said he 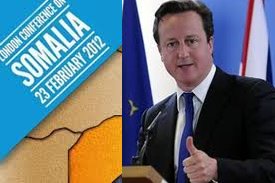 World leaders are attending a major conference on the future of Somalia in London to focus on finding peace and ending threats of terrorism and piracy.

Somalia has endured more than two decades of civil war and famine.

Representatives from many Somali factions are also attending, but not the Islamist group which controls much of the centre and south of the country.

The UK has described Somalia as the “world’s worst failed state” but said it needs a “second chance”.

Mr Cameron told the gathered leaders, who included US Secretary of State Hillary Clinton, Nigerian President Goodluck Jonathan, Ethiopian leader Meles Zenawi and UN chief Ban Ki-moon, that the world would pay a high price if it ignored the plight of Somalia.

During his speech, Somalia’s President Sheikh Sharif Sheikh Ahmed called for an end to the arms embargo.

Yoweri Museveni, the leader of Uganda – which has provided the bulk of troops for African Union (AU) forces in Somalia – told the gathering African solutions to African problems worked best.

On Wednesday, the UN Security Council approved a resolution increasing the number of AU troops in Somalia by 5,000 to more than 17,000. Council members also agreed to extra funding for the mission and to extend its mandate.

This is about trying to put in place the building blocks among the international community but, above all, among the Somalis themselves for a stronger and safer Somalia”

At the same time, Ethiopian and Somali troops took the strategic stronghold of Baidoa in the south-west of the country held by militant group al-Shabab, which recently merged with al-Qaeda.

On Wednesday evening, officials said a bomb planted by the militants exploded in the centre of Baidoa causing minor injuries.

Islamist insurgents who have been fighting the internationally recognised government since 2007 have said the London conference was “another attempt” to colonise Somalia.

“They want us under trusteeship and we will not allow that. God willing we will face the outcome with full force and stop it,” a spokesman for al-Shabab, Ali Mohamud Rage, said.

“A stronger America failed and all these Africans failed and we say you should not waste your time, you will lose. We also tell them not to waste their resources.”

The UK says its increased focus on the country is justified as the activities of militant groups and pirates operating off the coast of Somalia pose a direct threat to British interests in the region and to both regional and global security.

Naval ships from the UK and other countries around the world have been sent to patrol the Indian Ocean off the Somali coast to deter pirate attacks.

They have foiled a number of kidnapping attempts in recent months but attacks continue – and have been staged further from the shore.

Kenya has also sent troops into Somalia to tackle al-Shabab, blaming the group for a number of kidnappings on its territory last year. Its forces will now be absorbed into the AU force following the UN resolution.

Mr Cameron told the UK Parliament on Wednesday that a more co-ordinated approach was needed by the international community to tackle the multiple challenges facing the country.

“This is about trying to put in place the building blocks among the international community but, above all, among the Somalis themselves for a stronger and safer Somalia,” he said.

“That means taking action on piracy, on hostages, to support the African Union’s mission in the country, it means… working with all parts of Somalia to try and give that country a second chance.”

UK Foreign Secretary William Hague, who visited Somalia earlier this month, says he is “realistic” about what can be achieved in a single day but a more stable Somalia would benefit the region as well as the UK.

Somali leaders have said its challenges cannot be solved by military means alone and a parallel focus is needed on boosting humanitarian aid, education and law and order.

Somali Prime Minister Abdiweli Mohamed Ali told the BBC that his country was at a “crossroads” and needed a massive injection of money.

“It is at a very critical juncture in its history,” Mr Ali said. “We are moving from an era of warlordism, terrorism, extremism and piracy and we are moving into an era of peace, stability and normalcy.

“Twenty years of lawlessness, violence and chaos is enough. Somalis are ready to move on.”

Despite being forced out of the capital, Mogadishu, last year, al-Shabab has continue to stage suicide attacks in the city.

The BBC’s Mohammed Dhore in the Somali capital, Mogadishu, says security is extremely tight in the city because of the conference, with more than 50 roadblocks compared to the usual five.