The breakaway region of Somaliland has started to offload the arms cargo from a ship that recently docked in one of the ports in the region under the cover of darkness, officials have confirmed. The MV 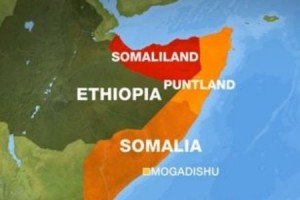 The breakaway region of Somaliland has started to offload the arms cargo from a ship that recently docked in one of the ports in the region under the cover of darkness, officials have confirmed.

Among the weapons offloaded was the famous Sturmgeschutz SAV 101 tanks, that the Nazi leader Adolf Hitler his troops used during the World War II, armoured vehicles, ammunition and other military equipment.

Days later, Officials from the separatists administration insisted that they had seized the weapons while other goods were being unloaded from the ship. A team from the UN monitoring group was denied entry to the port that was expected to carryout investigations on the unknown cargo.

Horseed Media has learnt that the port was under an unofficial state of emergency as crates of weapons were being offloaded from the ship and loaded onto several trucks. The trucks later drove to unknown places.

The weapons are thought to have been purchased from Eritrea,  credible sources have confirmed.

According to reliable sources, a Sudanese based company which is yet to be identified is believed to have purchased the weapons on behalf of Somaliland – which is not recognized by the international community. But during the agreement, one of the Somaliland’s President close aides Hirsi Hajji Hassan was there to observe, who serves as a minister in the administration.

Eritrea, a tiny state in Eastern Africa is facing sanctions from the United Nations after it was accused of aiding Islamist militants. It is a state that has been fuelling the Somali crisis for the past decades and found of supporting extremist groups such as al-Shabaab by arming and training its fighters.

It is also accused for abusing human rights such as jailing oppositions and journalists.

However, analysts have said that Somaliland is playing ‘’a low-strategy by informing the world with inaccuracies yet the ship was bound for its port.’’

The neighbouring Puntland administration has accused Somaliland of clearly breaching the 1992 UN sanctions on Somalia, which prohibited the importing of arms to the war-ravaged nation.

It has also violated THE DANGEROUS WEAPONS (ALDERNEY) ORDINANCE, 1965, which its section 21 says: ‘’a person shall not purchase, acquire or have in his possession any dangerous weapon or ammunition unless they hold a valid weapons certificate.’’

Puntland has long accused Somaliland of arming and providing safe havens for al-Shabaab militants in Galgala mountain ranges, where the Puntland forces have been fighting with the al-Qaeda-linked militant group since 2010. Recently, the Puntland defense forces managed to capture all the strategic bases the group had in the mountainous area.

In 1991, after the overthrow of Somalia’s military leader Siad Barre, the northern territory of Somaliland declared independence, but has not been recognized by the International community.