Sisters in Eritrea struggle with impact from evictions, hospital closings

As the Eritrean government continues to punish the Roman Catholic Church by closing down their hospitals and other medical facilities in the country, members of religious congregations are bearing the brunt. Scores of nuns who live 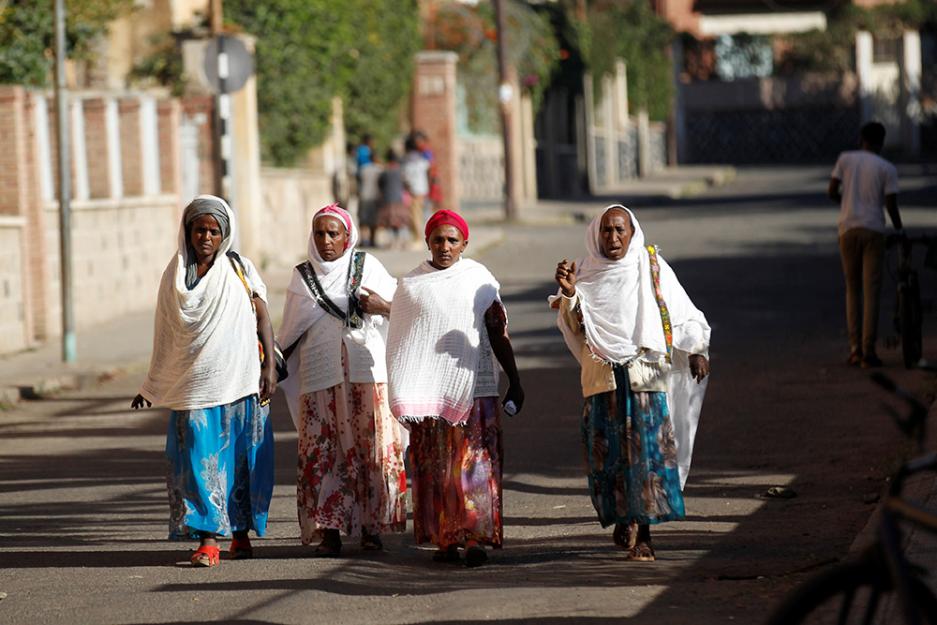 As the Eritrean government continues to punish the Roman Catholic Church by closing down their hospitals and other medical facilities in the country, members of religious congregations are bearing the brunt.

The Catholic Church, which makes up about 5 percent of Eritrea’s population of 6 million people, has come under attack from the government for criticizing President Isaias Afwerki’s dictatorial rule.

One sister was left homeless after the government evicted her from her residence in a church-run hospital in Zager, a village about 20 miles north of the capital, Asmara.

“The soldiers came and ordered us to leave our residence without carrying anything,” the nun said by phone from northern Eritrea. “I have been forced to stay with a friend as I plan to travel to Ethiopia where my family lives. We are afraid because soldiers are threatening to arrest anyone who doesn’t want to comply with the directions.”

The nun, who is from the Order of Daughters of St. Ann, said the move by the government to close health centers was heartbreaking and noted that there was growing fear that the authorities will also shut down the Catholic schools. The clinic she ran was providing maternity care and general services for needy and vulnerable people in the villages, she said.

“I have never seen such heartless people,” she sobbed, referring to government officials who closed the facilities without considering the patients. “What the government has done hurts the patients who were receiving treatment [at the facilities] more than anyone else. This country needs prayers so that God can heal our leaders’ hearts.”

The conflict in the northeast African country started on June 12 when the health care administrators who are religious leaders declined to sign papers acknowledging the transfer of their medical facilities’ ownership to the government and instead asked authorities to speak to church leaders. Angered by their action, soldiers and officials from the Ministry of Health raided the facilities and ordered their closure. Patients and elderly people who were receiving treatment at the time were ordered to leave the facilities, and staff officials were expelled.

A few weeks later, soldiers dressed in military fatigues raided convents that run clinics within their complex and forcibly took over the facilities including the convents. The nuns were ejected from their convents, their belongings thrown out during the evictions.

A Comboni Missionary Sister told Global Sisters Report in a phone interview that the church was paying the cost for speaking out about national reconciliation, political reforms and justice in the country.

Eritrea, which was part of Ethiopia until it became an independent state in 1993, remains a one-party state under Afwerki’s rule. The country has undergone notoriously gruesome human rights violations. The government has been accused by human right groups of committing crimes such as enslavement, imprisonment, enforced disappearances, torture, persecution, rape and murder.

In recent years, dozens of Christians, especially from the Pentecostal churches, have been arrested by security forces and detained without charges for operating unrecognized religions. The government has raided and arrested devotees who meet at their private homes to pray. Authorities have banned public activities for religious groups the government claims are instruments of foreign governments.

In April, Eritrean Catholic bishops angered the government by releasing a pastoral letter calling for a national reconciliation process to go along with respect for human rights and religious freedom.

“The problem of the church and the suffering of nuns began after the bishops petitioned the government to respect human rights and called for national reconciliation. The appeal by the bishops was a threat to this government and I’m afraid that they might even close down the church,” said the Comboni sister, who runs an orphanage in southern Eritrea.

Still, the government has maintained that the officials were strictly following the country’s regulations that were introduced in 1995, limiting any developmental activities of religious institutions, including schools, hospitals, agricultural projects, and sponsoring education for vulnerable children.

Religious leaders, including nuns around the continent, have condemned the government for the act, terming it unreasonable and unjustifiable since the facilities provide services to all Eritrean people, especially poor women and children from the villages who cannot afford to pay for services at the state-run hospitals.

“There is no justification for the actions of the regime,” Fr. Mussie Zerai said in a statement. Zerai, who estimates 200,000 patients a year seek treatment at Catholic medical centers in Eritrea, resides in Rome and coordinates pastoral work for the country and European Eritrean communities. “[The action] punishes those who are taking care of the poorest of the poor as most of the patients weren’t Catholics, but Orthodox Christians, Muslims, and members of other religions. The facilities are often located in remote areas.”

Speaking to Global Sisters Report, Sr. Noelina Nakato of the Institute of the Daughters of Mary (Bannabikira Sisters) of Uganda’s Masaka Diocese, agreed with the priest’s sentiments, saying the government has a strong atheist leaning, and appealed to the authorities to be human and stop torturing nuns who work at the facilities.

“It’s very sad that the government wants to confine the work of the church only in places of worship,” she said. “The Eritrea government should stop the harassment and protect the rights of the people.”

Sr. Mercy Shumbamhini, who is the president of the Conference of Major Religious Superiors of Zimbabwe, wondered why the government of Eritrea was not appreciating the nuns for the work they have done for the country.

“It’s very disappointing that the government does not want to appreciate the work of the nuns,” said Shumbamhini, who is also a superior general of the Mary Ward Congregation of Jesus in Zimbabwe, Zambia and Malawi. “The nuns have given themselves for the service of the poor people and they should at least be respected and given space to work.”

“Everything in Eritrea makes me angry,” she added. “Why can’t they respect the women religious? If they don’t need them to work, they should be given time to pack and leave. It’s very unfortunate that they are throwing their belongings outside and forcefully evicting them.”

Meanwhile, the Daughter of St. Ann sister appealed for prayers saying their lives were under threat and the government was following their activities after closing the clinics.

“All we need is prayers,” she concluded. “God can change impossible situations.”