Egyptian President Abdel Fattah al-Sisi met with his Eritrean counterpart Isaias Afwerki in Cairo in a meeting that was a "deliberate move" against Ethiopia, political sources in Cairo told The New Arab. The two leaders met on Tuesday 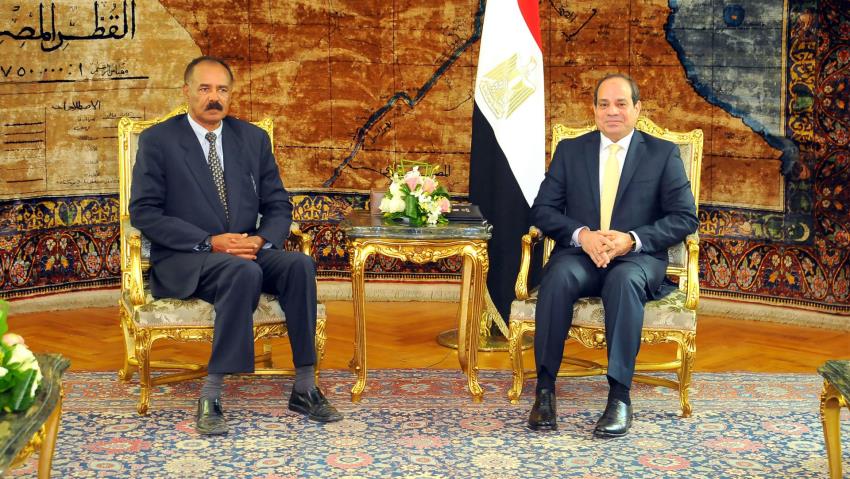 Egyptian President Abdel Fattah al-Sisi met with his Eritrean counterpart Isaias Afwerki in Cairo in a meeting that was a “deliberate move” against Ethiopia, political sources in Cairo told The New Arab.

The two leaders met on Tuesday to discuss enhancing bilateral relations across all levels and projects related to fishing and agriculture, local media reported.

Ethiopia is building a hydropower dam on the Nile close to its source in the Ethiopian highlands, raising fears in Egypt, which depends on controlling the flow of the Nile’s waters for its survival.

“Approachment with Ethiopia’s enemy and demonstrating the possibility of cooperation could pressure Addis Ababa to be more flexible in dealing with the Renaissance Dam or it could make the situation worse,” the source said, who spoke on the condition of anonymity.

“The aim of this meeting is to send a message to Ethiopia. In the past there has been non-serious talk about Egypt striking Ethiopia, however, it could possibly supply Eritrea with arms,” he added.

Former Egyptian diplomat Maasoum Marzouq said that using Eritrea to intimidate Ethiopia was a tactic that must be used with “extreme caution”.

In October, Ethiopia accused Egypt and neighbouring Eritrea of supporting outlawed rebels and stoking an unprecedented wave of protests that has led the government to declare a six-month state of emergency.

An Ethiopian minister said there was “ample evidence” that Egypt had provided training and financing to the Oromo Liberation Front, a group labelled a terrorist organisation by Ethiopia.

He added that “elements in the Egyptian political establishment” were fomenting rebellion, seeking to promote “historical rights” over access to the River Nile.

Eritrea and Ethiopia fought a two-year border war between 1998 and 2000 which left 80,000 dead, and tensions between the neighbours flared again earlier this year.

Ethiopia’s government is facing the biggest challenge of its 25 years in power from protesters who have turned their anger against foreign-owned companies, torching several farms and factories in the past week.

Rights organisations have already criticised authorities for a harsh security crackdown on nearly a year of protests that has killed hundreds.